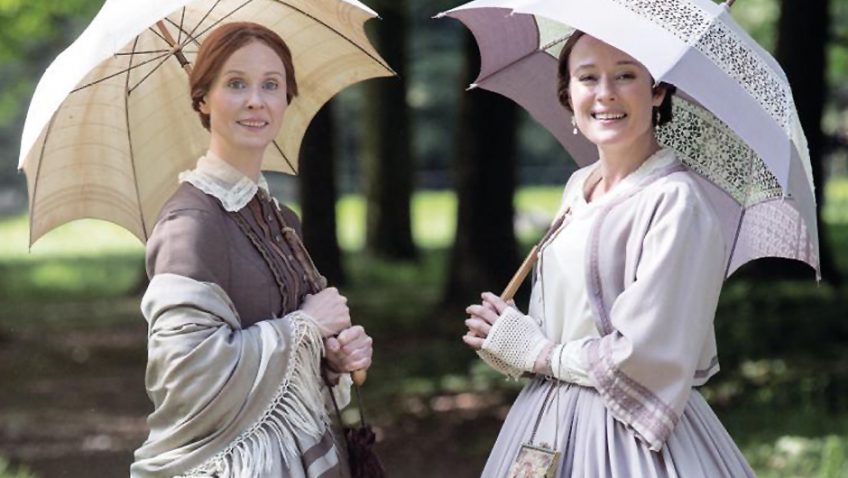 The passionate fusion of Terence Davies and poet Emily Dickinson

There is a certain irony in casting ‘Sex and the City’ co-star Cynthia Nixon as Emily Dickinson, the reclusive ‘spinster’ from Amherst, Massachusetts, determined to protect her pre-dawn writing ritual from a theoretical disapproving husband. There might also be a certain irony in atheist Terence Davies, born in Liverpool in 1945, being so drawn to the moralistic 19th century American poet so obsessed with protecting her soul. As Davies makes clear in his witty and complex biopic, however, irony was a key component of her art and life. 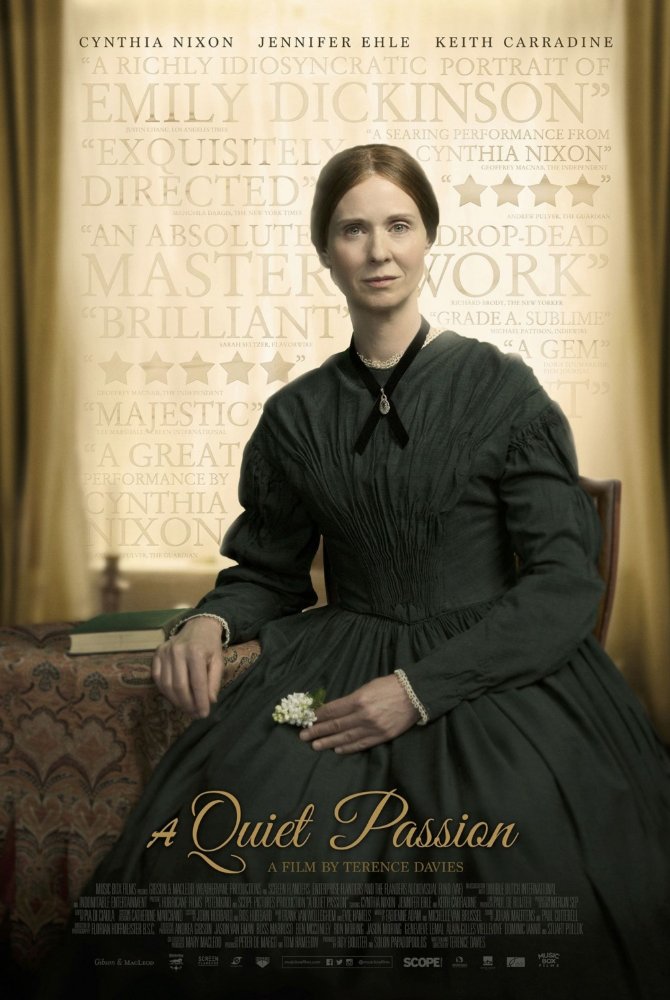 Irony aside, the fusion of Davies and Dickinson in A Quiet Passion is one of the most insightful and compassionate of any literary biopic in the past decade. Davies seems drawn to a creative soul, who, like himself, refuses to compromise and pays the price. Davies is 71 and has made only eight feature films. Dickinson had only eleven of her 1800 poems published during her lifetime. Although several collections of her poems were published after her death, until 1955, they were all heavily altered to conform to the poetic norms of the time.

To avoid the expository pitfalls of a literary biopic, Davies opts for a series of chronological tableaux that become self-contained chamber pieces of mood, character development, atmosphere, wit – and music. Each tableau serves a function, whether of introducing moral issues, key people in her life or news. One tableau deals with the Civil War through an argument between Emily’s brother Austin (Duncan Duff) and their father Edward (Keith Carradine) who refuses to allow his only son to enlist. Another tableau focuses on Emily’s intolerant and self-righteous reaction to Austin’s affair with actress Mabel Loomis Todd (Noemie Schellens). Each tableau usually ends with Nixon’s sensitive voice over of a poem Emily is writing or planning in her mind.

The pattern of having Emily’s younger sister Lavinia or ‘Vinnie’ (Jennifer Ehle) knocking on Emily’s (Nixon) bedroom door to announce an arrival, departure of some other news can grow monotonous, but it is Davies’ way of showing that Emily was increasingly housebound, particularly during the final 15 years of her life.

Vinnie announces the arrival of a visitor (Samuel Bowles, editor of the Springfield Republican, who drastically edited some of her poems before publishing them) and the devastating news of a departure (the married Reverend Charles Wadsworth, an admirer of her poetry – whom Emily describes as a man ‘as handsome as he is ecstatic and so clean, like a cherub after bathing’).

And there are the endless announcements of death that find their way into her morbid poetry, including that of her mother (Joanna Bacon), a less introspective and weaker version of Mrs Dalloway; and her beloved father, Edward, a lawyer and treasurer of Amherst College. As we see in a series of tender, humorous and witty exchanges between father and daughter, Edward believes in education for women; encourages Emily’s poetry writing and accepts Emily’s refusal to attend Church. On the other hand, while he dutifully attends the opera, he objects to Jenny Lind (Marieke Bresseleers) displaying her talent in public on the stage. 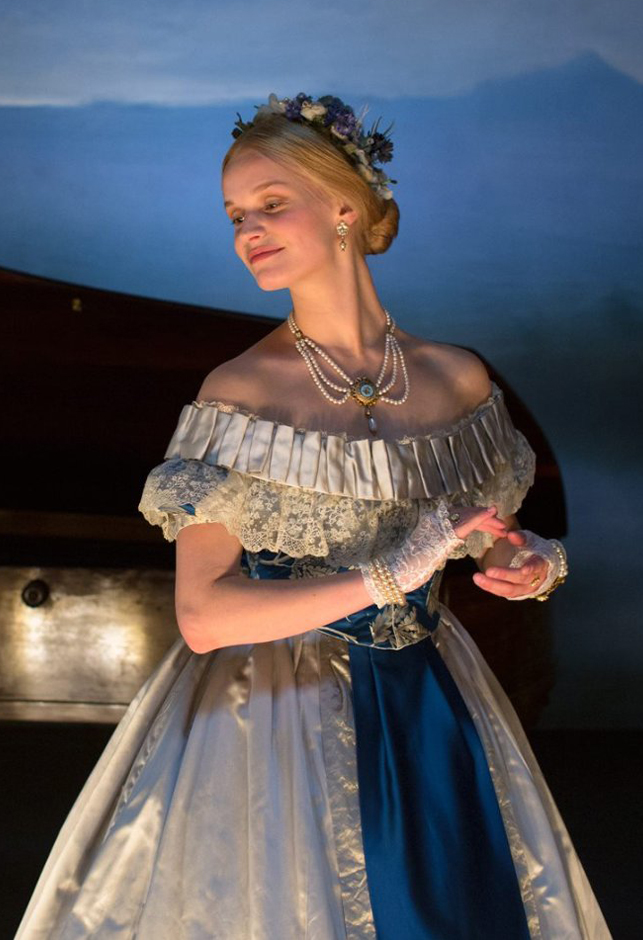 Marieke Bresseleers in A Quiet Passion

What we gain from this structure are intricate and thought-provoking and articulate discussions of faith, individual compromise, war, marriage, death and contemporary literature. In these tableaux Davies also captures the supportive relationship between Austin’s friend and eventual sister-in-law Susan Gilbert (Jodhi May) who complains to a fascinated Emily about the burden of a wife’s sexual duties. Susan’s marriage was not a happy one, but reading forbidden books with Emily and helping her with her poetry (apparently, Susan was the person Emily would listen to in matters of verse) filled a gap in her life.

What we lose from this episodic series of tableaux is not only any sense of dramatic development, but the continuity of correspondents – mainly male – friendship and artistic influences that shaped Emily’s life and the evolution of her poetry. There is no mention of Benjamin Franklin Newton, a young attorney who died young, but introduced Emily to Wordsworth and Emerson; or Thomas Wentworth Higginson, abolitionist, ex-minister and literary critic with whom she corresponded for 26 years.

Nixon’s restrained and beautifully nuanced performance and the depth of her role provides some insight into the way the compromises made by married women resulted and her happy, safe and creative family environment shaped her reclusive nature. Davies illustrates this in several scenes, few more telling than the visit of Emily’s staunchly Protestant and disapproving aunt, Elizabeth Dickinson Currier (Annette Badland). The three siblings (played by separate, younger actors) tease their indignant aunt in a series of humorous scenes, while their parents enjoy the children’s superior wit too much to scold them.

Davies attention to detail extends to his use of music. A piece by the American modernist computer Charles Ives, for example, might seem odd, but, like Emily his music was unappreciated (and unperformed) during his lifetime and for some years after his death. His music included, as did Emily’s poems, traces of gospel and hymns, and was as technically innovative and misunderstood as Emily’s poems.

There are a few false steps in the film, only one of which might detract from our enjoyment. The intended function of the character of Catherine Bailey (Vryling Wilder Buffum) is clear, but the character speaks in overwritten volleys of ripostes like she is auditioning for last year’s Love and Friendship. While Davies Nixon recites several of Emily’s poems, we never really learn what was so innovative and distinctive about them (for one thing, we never see them on the page). And it is odd, since Dickenson was, in her lifetime, at least as well known for her gardening skills as for her poetry, that Davies ignores any mention of this talent, particularly when he shot some exteriors on location at the Emily Dickenson House Museum in Amherst.