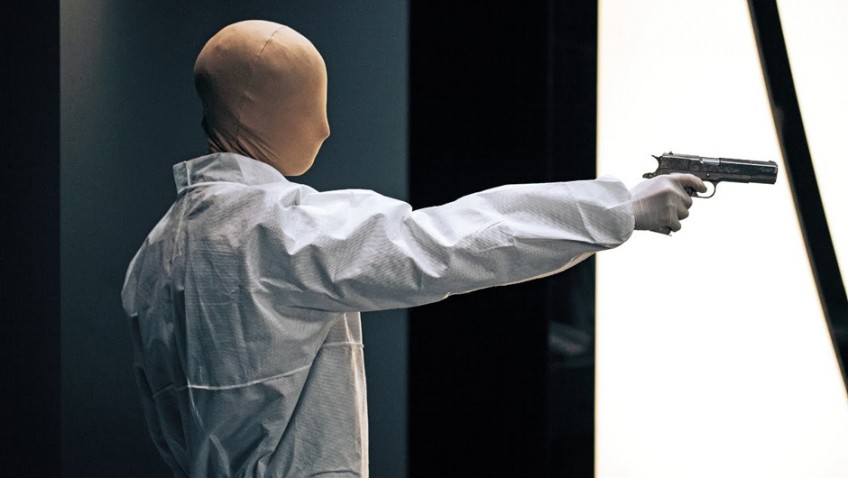 Remainder is the feature debut of the internationally renowned video artist Omer Fast, whose 14-minute video projection, the Casting (2007) is owned by the Tate Modern.  Remainder is based on Tom McCarthy’s 2001 novel of the same title about a young man who loses his memory in a freak accident and spends the insurance money trying to reconstruct his life at that point in time. ‘Sometimes it’s best not to know,’ might be the motto, but there’s certainly no telling that to Tom (Tom Sturridge) as he goes about his re-creation with the precision of an Academy Award winning director striving for verisimilitude and authenticity at all costs. If Remainder sounds a lot like a combination of Christopher Nolan’s exciting first full-length feature Memento (2000) and Charlie Kaufman’s directorial debut, Synecdoche, New York (2008) it’s because it is. 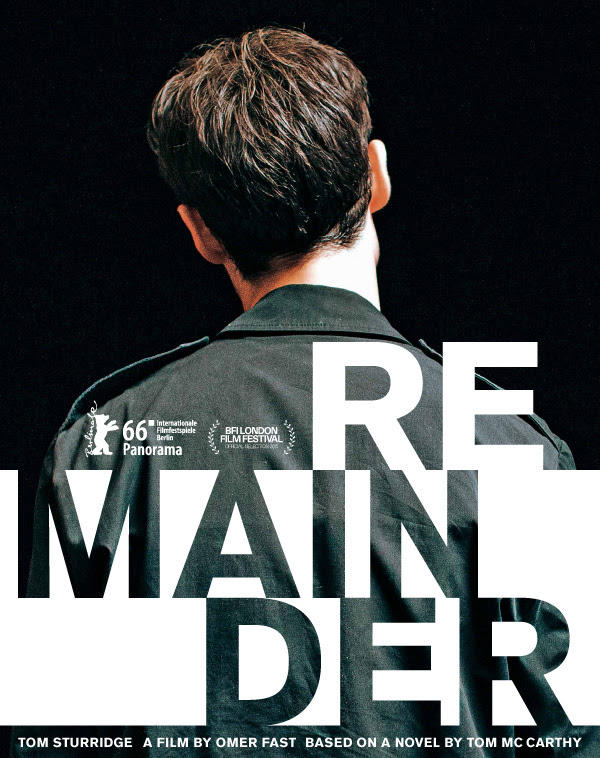 In a marvellously cynical cameo, Nicholas Farrell plays the Dickensian sounding insurance compensation lawyer, Daubenay, who encourages his client to accept the generous £8.5 million settlement under the condition that he say nothing about the accident.  This is not a problem for Tom whose real problem is that he cannot remember anything about it.  Instead of spending the money on medical treatment, however, he opts for a method of memory capture that is of his own creation – the creative process being an apparent theme of the film.

In the film Momento, a seemingly ordinary man with anterograde amnesia must somehow establish his identity and reconstruct his past actions, based on a few tangible clues, in order to exonerate himself of a murder charge. Tom, too, becomes, in essence, a writer/director of his own life story.  There are a few apparent givens, such as a girlfriend (Cush Jumbo) and a best friend (Ed Speleers) both of whom Tom grows to distrust and alienates. The first step is to re-create his home.  When all other estate agents fail him, Tom hires a smart and efficient agent named Naz (Arsher Ali, Four Lions) as a project (or, in film terms, a production) manager.

Naz’s first task is to help Tom find an apartment block in London that resembles the building in which Tom was living at the time of the accident, insofar as he can recall.  Tom purchases a run-down building in Brixton, complete with actors to pay the inhabitants – his former neighbours.  These include an old lady whose task is to cook liver and empty the rubbish (Tom recalls the gesture and the smell) and a young boy with an outstretched hand, the memory of which haunts Tom more than all the others.  Even the pigeons on the roof in just the right arrangement are an essential prop.  Naz almost draws the line here, but he perseveres.

The murder of a ‘cast’ member and other events lead to a bank robbery. Tom’s budget escalates as he hires a huge sound-stage on which to recreate the bank robbery that Tom believes could prove a critical clue. Any good director would bring in an expert in his bid for authenticity and, through Naz, Tom hires a reformed criminal (Danny Webb) for the job. The way in which the initially bemused but cooperative actors are made to repeat the robbery over and over until it satisfies the expert and Tom recalls the creative process of any serious director with a decent budget.  When Tom oversteps the boundaries, however, we are reminded of Synecdoche, New York in which a mentally unstable regional theatre director secures funding for an experimental play that ultimately proves self-destructive. He constructs an entire town and hires actors (for months and then years on end) to go about their daily routines.  Eventually the director’s mental stage collapses to such an extent that neither he, the remaining actors nor the viewer can distinguish reality from the staged version of it.

The title might also be a reference to Synecdoche, New York.  Remainder is ‘what is left’ and is a term associated with subtraction or division of a whole.   Synecdoche is a play on the name of the actual New York city, but is also a figure of speech in which a part is made to represent the whole or vice versa (e.g. ‘will England beat Iceland,’ with England referring to the football team).

Synecdoche, New York is considered either masterpiece or a seriously misguided and punishingly (on the audience) self-indulgent film.   While noone is calling Remainder a masterpiece, the film is also likely to divide (excuse the pun) opinion.  The problem with Remainder is  not only that the pay-off is too vague and unsatisfying to make the journey worthwhile, as in The Usual Suspects, but that the central character, through whose obtuse mind we see everything, is so unsympathetic, it’s hard to care about what happens or happened to him.  And since we are left in the dark about his past or present activities there is no apparent conflict or sense of urgency. Without any tension or suspense, you might find boredom filling the void after the initial novelty wears off.