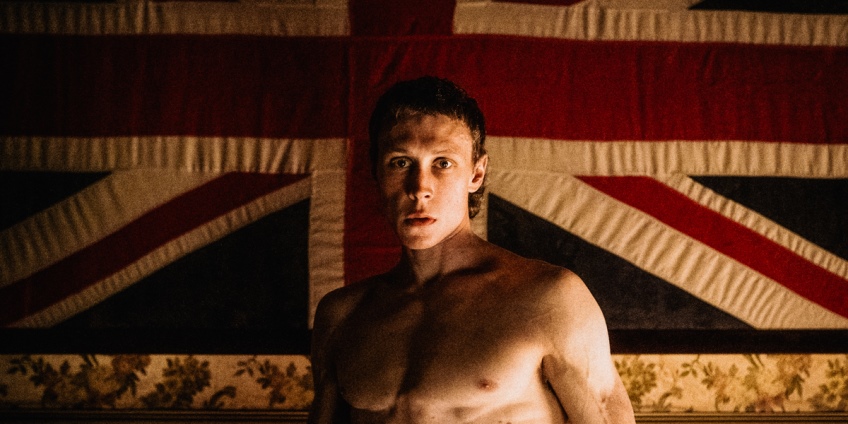 Our continued interest in the legendary Australian outlaw Ned Kelly is not only due to a general fascination with young, ill-fated outlaws, but to the cultivation of the myth by painters, musicians, filmmakers and at least one novelist. Australian artist Sidney Nolan was obsessed with Kelly, perhaps because, as a 5th generation Irish-Australian with a criminal record himself (he was a WWII army deserter), he felt an affinity with the man. There is even a self-portrait with the artist hidden under Kelly’s helmet. Or perhaps because Nolan discovered his grandfather might have been one of the officers sent to ambush the gang, he felt the need to make amends with his striking, dramatic, and monumental paintings. Tony Richardson’s panned 1970 biopic starring Mick Jagger did not do much for Jagger’s acting career or for Kelly’s image, although the soundtrack added a new, musical, dimension to the legend. The famous armour that Nolan designed for the film emerges in Australian director’s Justin Kurzel’s True History of the Kelly Gang.

After reading Peter Carey’s enthralling, Booker Prize winning, True History of the Kelly Gang, afficionados of the bushranger will naturally be drawn to Kurzel’s film, based on scriptwriter Shaun Grant’s adaptation of Carey’s novel. For everyone else, Kurzel’s imperfect introduction to Kelly is less urgent.

Kurzel’s 2011 breakthrough film Snowtown, another biopic of an infamous Australian killer, is also based on a book adapted by Shaun Grant. When Kurzel’s follow-up, Macbeth – another adapted biopic of a serial killer – was released in 2015, it became clear that Kurzel makes a bigger impact with his atmospheric visuals than with his storytelling.

This is the case with True Story of the Kelly Gang, an uneven film that opens in Victoria, Australia in 1867 and follows the mostly brutal adventures of Ned Kelly to his premature death. The film is commendable primarily for retaining Carey’s portrait of an intelligent, honourable, sensitive (he is even a horse whisperer), hard-working, and slightly naïve, victim of tough and violent times. Kelly was caught between his loyalty to his poor, morally compromised Irish family with their hatred of the English, and the discrimination and corruption of the Anglo authorities who would never give the children of the alleged convict John “Red” Kelly a fair deal.

The film boasts some haunting images in the visual motif of a cross-dressing horseman galloping through the outback – the dresses representing both a traditional form of Irish defiance and an affront to Ned’s (George Mackay) macho image; and several dramatically staged scenes, such as a tense stand-off in a hotel room.

Here, young Ned (Orlando Schwerdt) apprenticed for money by his mother, Ellen (Essie Davis) to the reckless bushranger Harry Power (Russell Crowe), is ordered to shoot off the penis of an unscrupulous police officer (Charlie Hunnan) caught two-timing Ellen. There is also a heart-breaking scene, when Ellen’s pride and prejudice dash Ned’s chance of a top education: a gift of the wealthy family of a boy Ned saves from drowning.

In the latter scene, the wealthy mother makes a personal visit to the Kelly’s’ cabin on their rundown farm to express her gratitude. Ellen despatches the woman with a frightening sneer, and a defiant warning that no English woman is going to take her child away from her. The audience might be reminded of the 20th century revelations that Australian white authorities separated aboriginal children from their parents to be reconditioned in special orphanages.

Any sympathy you might have for Ellen, a widow who ekes out a living serving bootlegged alcohol and sexual favours, is quickly dissipated when bushranger Harry Power arrives. Ellen has no qualms about apprenticing young Ned, around 14, to Power, allegedly to toughen him up for the life he will live. But Ned discovers that he is no more than an indentured servant to Power, sold for money. Instead of learning Latin, maths, and literature in a comfortable, warm boarding school with three meals a day, he learns how to botch a stagecoach robbery, shoot a vindictive police sergeant, survive in the wild on game and evade the authorities as a wanted man.

Against these standout scenes, we are jolted by random bursts of a loud modern soundtrack; gratuitous homoerotic scenes and Ned’s naked body; underdeveloped characters, and taxing dialogue recording, not helped by the high-pitched voice of Thomasin McKenzie, playing Mary, who is carrying the daughter Ned will never live to see. The gruesome, psychedelic climax (not in the novel) is where the metal headpiece and body armour that Ned designs comes into its own.

Both the film and the novel are based on the 56-page Jerilderie Letter that Kelly begins writing to his daughter when he discovers Mary is pregnant. Ned wants to justify his sins and, unlike his own father, tell his daughter the truth about her father – although the letter is written by an unreliable narrator. Moreover, a malicious schoolteacher wishing to capitalise on Kelly’s notoriety, may have altered the letter that Kelly naively entrusted to him. The film is prefaced with a caption: “Nothing you are about to see is actually true.”

Apparently, Kelly dictated the letter to his literate gang member, Joe Bryne (Sean Keenan). A loyal friend, Joe tries to convince Ned to use the money from a bank robbery to escape to America, rather than ransom his imprisoned mother. While Carey’s book captures Kelly’s hapless voice so convincingly that you want to hug him, Kurzel’s frenzied direction and Mackay’s soulless interpretation of a character he barely inhabits, keep us distanced. As with Macbeth, all the violent pizazz overshadows the story’s tragic humanity.