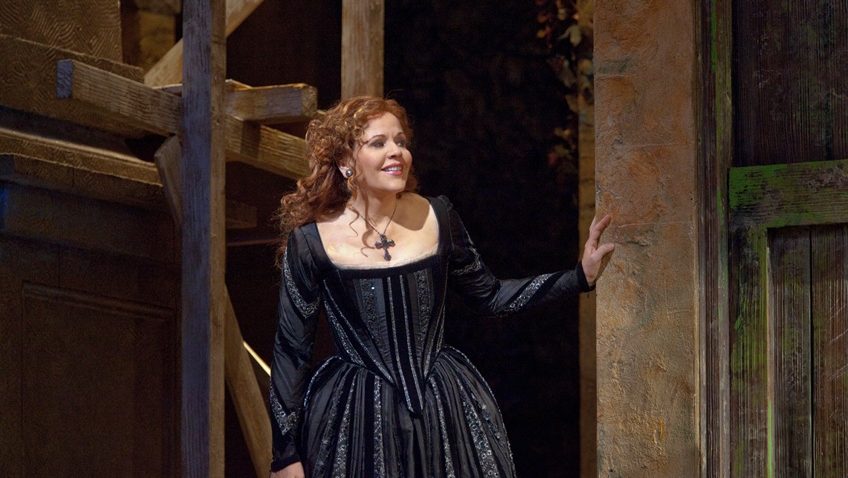 George Frideric Handel’s Rodelinda, a masterpiece of Baroque opera, premiered in London in 1725.

This production, directed by Stephen Wadsworth and conducted by Harry Bickett, premiered at The Metropolitan New York in 2011.

Rodelinda (Renee Fleming) is discovered in bed and chained to it. She is prisoner to Grimoaldo (Kobie van Rensburg), who usurped the throne from her husband, Bertarido (Andreas Scholl), whom she believes is dead. Grimoaldo proposes marriage.

Bertarido returns in disguise and thinks his wife is being unfaithful. He does not know that she thinks he is dead and that she is marrying Grimoaldo only to save their young son’s life.

The opera is full of sorrow. The ardour is intense. The anguish is real. Rodelinda suffers deeply. Bertarido is overcome with grief and weeps buckets. Even Grimoaldo grieves. The only person who is not grieving is Garibad (Shenyang), the villain, whose ambition is to get the throne for himself.

Bertarido is arrested and put in prison. Eduige (Stephanie Blythe), his sister who is in love with Grimoaldo, and Unolfu (lestyn Davies), his best mate, a really decent chap, come to his rescue.

Baroque opera is static. Aria follows aria. Wadsworth keeps the singers moving throughout and the movement is not distracting. The singers repeat themselves endlessly; but the repetitions are varied, physically and vocally. The production is full of realistic detail. The detail enhances the drama.

The singing is glorious. And the singers are good actors. So, too, is Moritz Linn, who plays the little boy, a silent role, relying entirely on reaction

Handel is great. Stephen Wadsworth’s production of Rodelinda is a memorable experience.