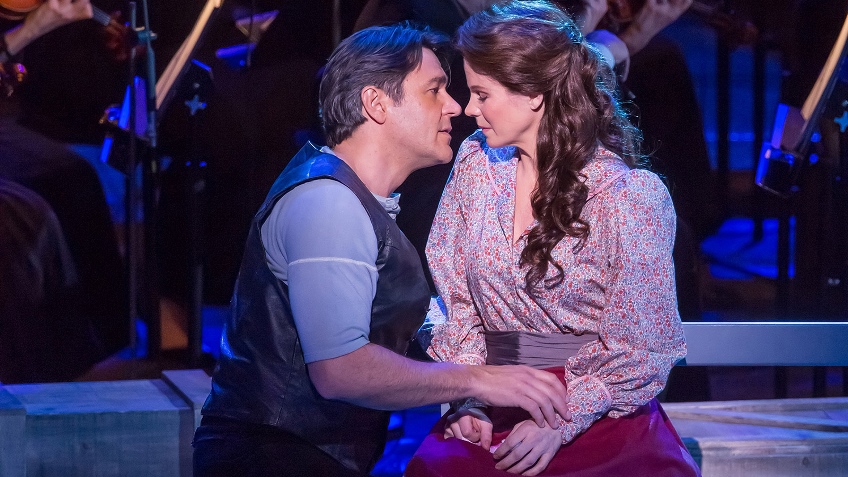 I know in advance that I am going to cry if I am seeing Rodgers and Hammerstein’s Carousel. But I can say in all honesty that I have never been as moved as I was when I was watching on line this fully-costumed concert production by The New York Philharmonic

The show, which was at the Lincoln Centre’s Avery Fisher Hall in 2013, was extremely well sung and acted. The cast was headed by Nathan Gunn and Helli O’Hara. Bob Fisher was the conductor. John Rando was the director. Warren Carlyle was the choreographer.

Carousel is based on a Hungarian play, Liliom, written by Ferenc Molnar (1879-1952) which premiered in Budapest in 1909 and was not a success until it was revived ten years later.

Molnar turned them all down, feeling that if Liliom was ever turned into an opera or a musical, the play would never be performed again. And how right he was.

The same thing happened to Bernard Shaw after Lerner and Loewe turned Pygmalion into My Fair Lady. There was no London revival for 21 years.

It would be interesting to see Liliom, Molnar’s gritty play. Liliom is Hungarian slang for Rough Boy.

Initially, Molnar turned down Rodgers and Hammerstein as well; but when they invited him to see their musical, Oklahoma! he was won over; and; to their surprise, he didn’t even object when they gave his story a happy ending.

You can be pretty certain that there wouldn’t have been a happy ending if Kurt Weill had written the musical.

The story is set in New England at the turn of the 20th century. Julie Jordan, a nice girl, tender and self-effacing, falls in love with Billy Bigelow, a good-for-nothing womaniser and petty criminal, who has lost his job as a fairground barker and is out of work.

Helli O’Hara gives a lovely performance and she sings beautifully. If you are wondering how Julie can go on loving Billy when he beats her when she is pregnant, the answer is in the casting of Nathan Gunn. You like the actor; you hate the character he is playing.

It’s a strong performance and Gunn singing My Son Bill, a seven-and-¬a-half minute soliloquy, is one of the show’s high spots.

Billy gets involved in a botched robbery and commits suicide. It is easy to imagine the emotion Puccini would have brought to Billy’s death-scene but I doubt very much if he would have been able to top You’ll Never Walk Alone.

All the songs – If I Loved You, June is Busting Out All Over, Mister Snow, A Real Nice Clambake, What’s the Use of Wond’rin’ – carry the story forward and the lyrics have the authenticity of normal speech.

Stephanie Blythe is Julie’s big-hearted motherly cousin. Jessie Miller and Jason Danieley are Carrie and Mr Snow. Kate Button is the owner of the carousel and Shuler Hensley is the baddie, who persuades Billy to bring a knife with him when they rob a bank manager.

Tiler Peck and Robert Fairfield, two principals from New York Ballet, dance the vision Billy has of his daughter and her boyfriend when he comes back to earth for one day and does the one good deed which will get him into heaven.

Many people think Carousel is the best musical of the 20th century.

Carousel is certainly an American classic and perfect escapism for the whole family: sentimental, tuneful, pretty and, in its final moments, when You’ll Never Walk Alone is reprised, deeply moving. I defy anybody not to cry.

To quote the show: “We’re mighty glad we came; we had a really good time.” And to have the score played by the New York Philharmonic is a terrific bonus.