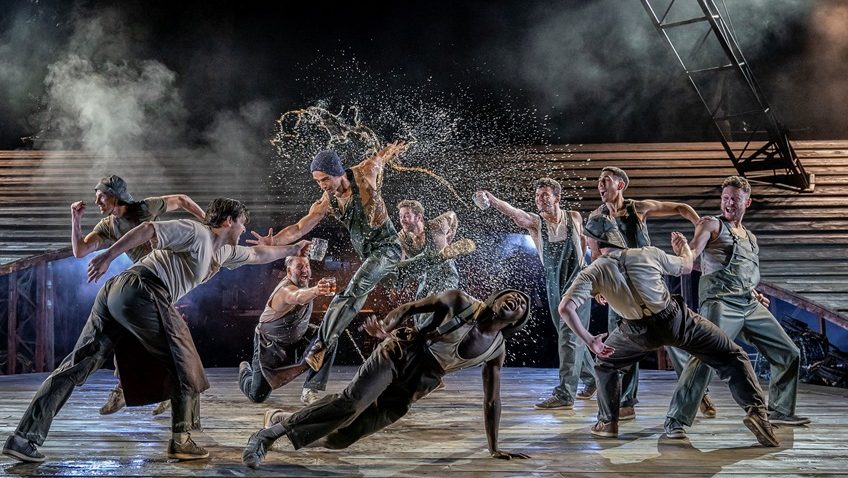 Carousel, based on a serious Hungarian play, Liliom, written by Ferenc Molnar in 1909, was a big success at its premiere in New York in 1945. It is amazing Molnar had agreed to a musical adaptation; and even more so since Rodgers and Hammerstein had given the story the happy ending, he absolutely did not want.

The success of Carousel lies in the integration of music, book and dance from the very start, with its long opening mime (instead of the usual overture) and right through to the unexpected ballet at the very end when the show is almost over.

There are some great songs – If I Loved You, June is Busting Out All Over, Mister Snow, A Real Nice Clambake, What’s the Use of Wond’rin’, You’ll Never Walk Alone and My Son Bill, a seven-and-a-half-minute soliloquy.

The story is set in a small New England fishing village at the end of the 19th century. Julie Jordan (Carly Bowden), a nice girl, falls in love with Billy Bigelow (Declan Bennett) a good-for-nothing womanizer, wife-beater and petty criminal, who has lost his job as a fairground barker and is out of work. Billy gets involved in a botched robbery.

The story has been reworked and updated to more recent times and set in multicultural England. The programme notes are devoted to domestic violence. Billy doesn’t face God; he faces a chorus of women.

The production is dance-driven by Drew McOnie’s aggressive choreography. There is not a whiff of nostalgia. I suspect a lot of audiences are going to be disappointed. I didn’t feel I was seeing or hearing the musical Rodgers and Hammerstein had written.

The last time I heard the score played was by the New York Philharmonic so it was quite a shock to be listening to Tom Deering’s brash re-orchestrations which gets rid of the strings and lushness and uses electric guitars.

One thing is for certain is that if Time magazine had seen only Timothy Sheader’s bleak production they would not have voted Carousel the best musical of the 20th century. This is the first time I have seen Carousel and not wept when You’ll Never Walk Alone is sung.

Christine Modestou and John Pfumojena as Carrie and Mr. Snow have an instant rapport with the audience. Joanna Riding, who played Julie Jordan in Nicholas Hytner’s production at the National Theatre in 1993, is cast as Nettie Fowler.

I should remind you that, however rainy it may be during the day, The Open Air Theatre never cancels a performance before the advertised time.