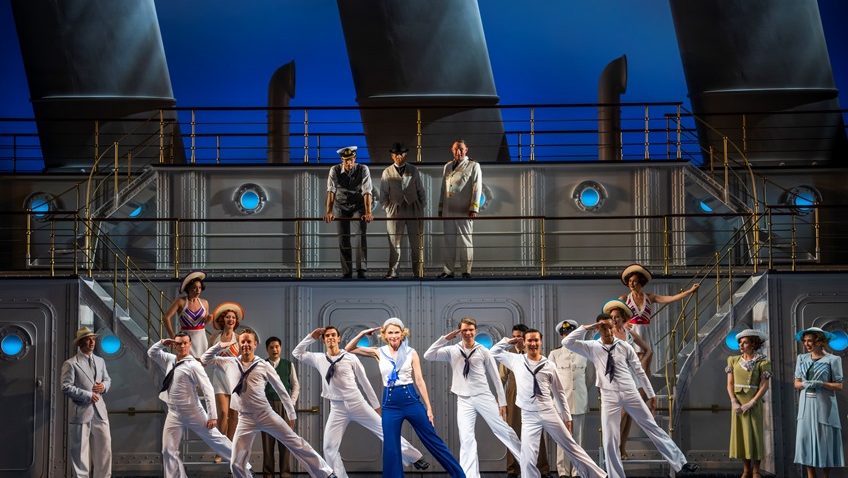 Robert Tanitch reviews Anything Goes at the Barbican Theatre

Cole Porter’s Anything Goes, which premiered in 1934, was the perfect light entertainment for audiences who had been through the Wall Street Crash and the Great Depression. And it’s the perfect light entertainment for today’s audiences who have been denied theatre for so long, due to Covid-19, and are wildly excited to be watching a LIVE show. The rapport between cast and public is palpable.

The 1930s were the Golden Age of the American musical and this lively, tuneful, wise-cracker was Cole Porter’s first smash-hit, running for 420 performances. Anything Goes is delightful, it’s delicious, it’s delectable, it’s delirious, it’s de-lovely, it’s the definitive stage musical of the period.

Cole Porter (1891-1964), composer, lyricist, socialite, wrote sophisticated songs of a consistently high quality for routine, trivial musicals from the early 1920s and he was equally successful on Broadway and in Hollywood. His songs with their suave, blasé, raunchy, sexy and witty lyrics have outlived most of the shows in which they appeared.

Anything Goes is packed with familiar songs and clever lyrics, such as: I Get a Kick Out of You, You’re the Tops, It’s De-lovely, Blow, Gabriel and, of course, Anything Goes.

Kathleen Marshall’s production, which she also choreographed, has style. The set is by Derek McLane. The elegant costumes are by John Morrel. The show has bags of energy and lots of comic business. There’s a new book by Timothy Crouse and John Weidman. The cast is headed by the American actress Sutton Foster who won an award for best actress in a musical in the 2011 Broadway revival of Anything Goes.

The setting is an ocean liner. A stowaway (Samuel Edwards) tries to persuade a beautiful girl (Nicole-Lily Baisen), who is engaged to an English Lord (Haydn Oakley), a silly ass, to marry him instead. He is helped in his endeavours by a nightclub singer (Sutton Foster) and a not very bright hoodlum (Robert Lindsay) who is disguised as a clergyman and carries his machinegun in his saxophone case

Sutton Foster repeats her star performance, instantly winning over the audience. She can sing, act, dance and she is funny. It’s a joy to watch her and Lindsay upstaging each other when they sing Friendship. There’s also a lifeboat gag, nicely timed, which fools everybody.

The highest spot of a show, which has many high spots, is the exhilarating, arm-swirling, all-tapping, dazzlingly number, the Act One finale. The run has already been extended. Audiences are going to get a tremendous kick out of Cole Porter’s Anything Goes.