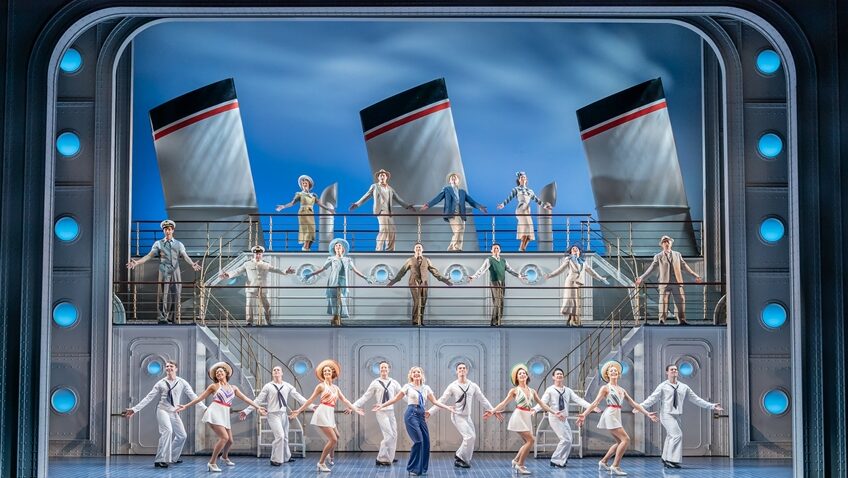 ANYTHING GOES, directed and choreographed by Kathleen Marshall, is back in the Barbican with a new cast, Kerry Ellis, Denis Lawson, Simon Callow and Bonnie Langford, in the lead roles.

The 1930’s were the Golden Age of the American musical and this lively, tuneful, wise-cracking musical, which premiered in 1934 and ran for 420 performances, was the perfect light entertainment for audiences who had been through the Wall Street Crash and the Great Depression. Today’s audiences, who have been through Covid will also get an enormous kick out of Cole Porter’s witty score.

The setting is a luxury ocean liner. A stowaway (Samuel Edwards) tries to persuade a beautiful girl (Nicole-Lily Baisden), who is engaged to an English Lord (Haydn Oakley), a silly ass, to marry him instead. He is helped in his endeavours by a nightclub singer (Kerry Ellis) and a not very bright hoodlum (Denis Lawson) who is disguised as a clergyman and carries his machinegun in his saxophone case (what else?)

Anything Goes taps its way to success. Marshall’s choreography and the company’s exhilarating energy has the audience on its feet twice, firstly in the actual Anything Goes Act One finale and secondly in the Blow, Gabriel, Blow, the hot gospel number in Act Two.

Comic high spots include Ellis and Lawson upstaging each other when they sing Friendship and Oakley tangoing with Ellis in The Gypsy in Me. Carla Mercedes-Dyer, a delightful comedienne, and a quartet of sailors stop the show with Buddie, Beware.