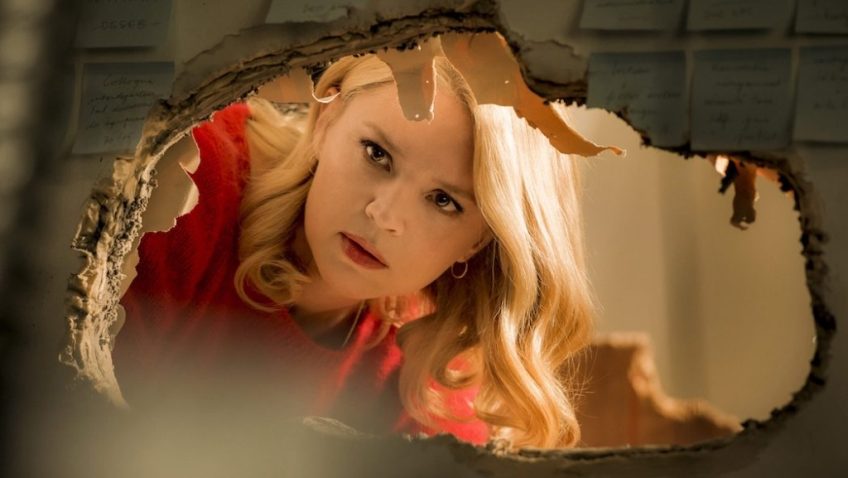 The “Adieu”, with its sense of finality, in the French title gives audiences a hint that this dark, screw-ball comedy will not end well, or, that it will end in a French New Wave manner. The first fifteen minutes of director-writer-actor Albert Dupontel’s Gallic farce is good enough to delay the inevitable feeling that not all French imports travel as well as Taxi.

The paths of the two leads and main protagonists cross early on in a bureaucratic entanglement that leaves Jean-Baptiste Cuchas (Dupontel, 9 Month Stretch) suicidal and Suze Trappet (Virginie Efira, An Impossible Love, Elle) with a reason to live – for the time she has left.

Cuchas, an IT security and surveillance veteran in a civil service office in Limoges, is a bit of a whistle blower, warning the department that security is weak. He is told he is being replaced but expected to train the upcoming generation before he leaves. This part of the film resonates splendidly with UK Skills Minister Gillian Keegan’s announcement that older workers have a duty to return to the office and pass on their knowledge to younger (perhaps unvaccinated) workers, although the younger workers have no such burden of expectation on them. Let’s hope this is developed into a satirical comedy by an enterprising British director.

Cuchas’ botched suicide attempt with a rifle on a makeshift apparatus creates a terrorist panic in the building where self-employed hairdresser Suze has just arrived to pit herself against the public archives department in her desperate search for her son. Suze, who has just had confirmation that she suffers from an uncurable autoimmune disorder, is determined to find the son taken from her at birth after she became pregnant following a dance floor romance.

Cuchas (a running joke is that all the bureaucrats get his name wrong) is not only sacked but is wanted by the police. Learning of this, Suze, with the clock on her life ticking, blackmails the hapless civil servant at a roundabout. If he helps her find her birth record, she will return the computer containing the evidence to prove he did not try to shoot his colleagues in revenge for his sacking.

Finding the child of an “unregistered” mother is not easy, and Cuchas seeks the help of Monsieur Blin (Nicholas Marié) deep down in the births and unregistered mothers’ records office. The running gag here is that Blin is blind. But Blin is also an activist, enamoured by Suze though he cannot see her.

From here on, the film piles absurdist situations onto chaos, as this unlikely trio wreak havoc in the town. At one point Blin, who clearly does not have a drivers’ licence, seizes a vehicle (for no good reason) and by an impossible coincidence, crashes into the car carrying the government and police contingent searching for Cuchas.

Dupontel clearly has no interest in creating any verisimilitude in his fanciful script. This is obvious from the fact that Suze and Cuchas just think of tracking down the baby’s father a few minutes before the closing credits. But the big, missed opportunity is the most obvious. During the entire chaotic cat-and-mouse race against the clock, Cuchas is hacking into multiple files, from the government’s to Suze’s son’s computer, on a search that is computer led. The irony of this situation is never highlighted which is a shame for Cuchas is running rings around the supervisors who sacked him and the young IT specialists who will be replacing him.

It is nonetheless not surprising that Bye Bye Morons was a commercial and critical hit in France, even cleaning up at their César Awards. The French might have ended their Monarchy in the 18th century, but they replaced it with a huge bureaucracy that is at odds with the French spirit and the target of criticism, jokes and satires ever since. It is not surprising that Félix Fénéon outwitted the prosecution to escape severe punishment for an anarchist bombing with his bureaucracy jokes.

At the time Fénéon, an underground anarchist, was working as a civil servant in the Department of War – the model bureaucrat. When police found detonators in his office, he was arrested and tried in the infamous 1994 Trial of Thirty. Fénéon ran verbal circles around the stodgy prosecution, and his witty reasoning turned the courtroom into a comedy club. All but three of the accused were acquitted. Fénéon’s 13-year civil service career ended, but his career as a writer (Novels in Three Lines); editor (La Revue Blanche); art critic (monograph, Les Impressionistes); and art collector (he organised the first exhibition of Seuret’s work and loaned his collection of African Art to MOMA) and one of the most painted faces in Paris had begun.

Dupontel is walking a fine line in a script that relies on self-destructive behaviour, disability, mental distress or illness to make people laugh. Blin is being bashed like a cartoon character due to his blindness, Cuchas is suicidal, and Suze is racing against the clock of her death sentence. Dupontel’s script substitutes misjudged slapstick for laughs, and it sometimes feels that we are watching an old-fashioned Punch and Judy show in a women’s refuge centre. Getting slapstick right is an art and quite apart from the script, here, with a couple of exceptions the timing and the visual gags misfire.

It is still a pleasure to watch Efira, who was so wonderful in the excellent film An Impossible Love and has been a stand-out in every film she’s been in, even with a small role up against Isabelle Huppert in Elle.

You can read our review of An Impossible Love by following this link.