Home / LIFESTYLE / REVIEWS > / FILM REVIEWS / A Night Shyamalan’s movie is big, bold and haunting, but not big enough to contain its jumbled ideas. 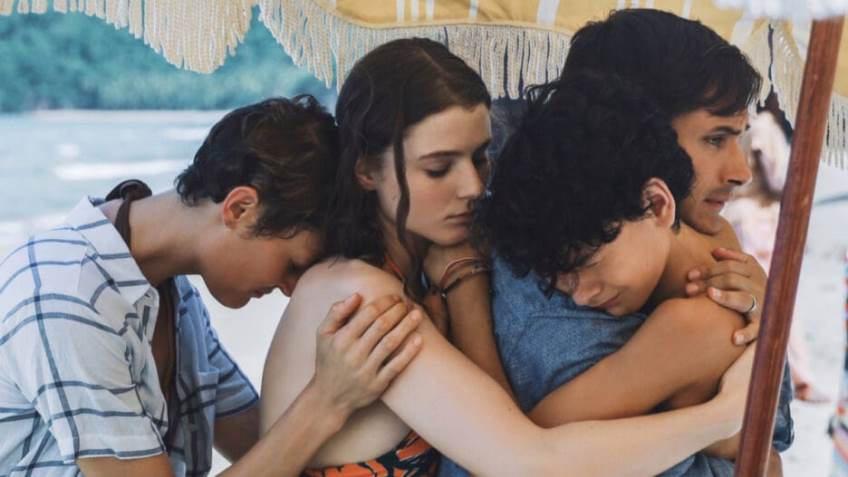 A Night Shyamalan’s movie is big, bold and haunting, but not big enough to contain its jumbled ideas.

M Night Shyamalan is known for making big, spooky, entertaining movies with a bit of a mystery and a twist at the end. Old fits this description down to a T, particularly as it is, and feels like – a big movie. But it’s not big enough to contain all the ideas jumbled around within the confines of this sci-fi thriller. Any review of Old will contain spoilers, so if you want to see it as Shyamalan intended, do not watch the trailer or read any reviews.

Although the title does not fit the film – if anything, it’s more about speeding up the process of ageing than about being old – Old is perfect summer fare, and a fresh alternative to the usual shark or sea monster movie. The two settings are a swanky hotel resort and a stunning private beach – the film was shot in the Dominican Republic. But this beach loses its tourist appeal early on, following in the footsteps of the ideal beach in The Shallows (2016), a film shot in Australia after the original beach in Texas refused a permit for fear of bad publicity.

Based on the graphic novel, Sandcastle, by Pierre Oscar Lévy and Frederik Peeters, the film is divided into three parts. In part one, the set-up, the Capa family arrive in a less than festive mood at a glamourous hotel in the jungle in an unnamed country. A mannequin-like waitress, Madrid (Francesca Eastwood) serves the parents, Guy (Gael García Bernal) and Prisca (Vicky Krieps) an exotic welcome cocktail with the unctuous manager (Gustaf Hammarsten) hovering about.

In tow are eleven-year-old Maddox Capa (Alexa Swinton) and six-year-old Trent (Nolan River) who remain in their room when their parents begin arguing, which is almost instantly. The couple are on the verge of divorce, but first want to find the right time to break it to the kids that Prisca has been diagnosed with a fatal illness.

Despite the home situation, Trent is an outgoing, affable and clever boy, who, seeing no other kids about, instantly befriends Idlib (Kailen Jude), the manager’s nephew. He is a lonely, equally precocious boy who wanders around this antiseptic, adult environment and observes more than he is given credit for. Without mobile phones, the kids communicate through code, which is coming back into fashion.

In a bit of foreshadowing, Trent (with Idlib) goes around asking adult strangers lounging in the sun for their age and occupations. Patricia (Nikki Amuka-Bird), an epileptic, and her husband Jarin (Ken Leung), a nurse, find this amusing. So does a law enforcement officer, (John Twohy) apparently holidaying on his own.

The short prologue ends when a friendly driver (played by Shyamalan) deposits a van load of selected guests at the gate of a private beach, telling them he’ll be back at five to collect them, or they can contact him to leave before that. Only 15 minutes into the film and we have doubts about this.

Other guests shown this VIP treatment include Charles, a middle-aged cardiothoracic surgeon (Rufus Sewall) and his skinny, bleached blond, heavily made-up wife Chrystal (Abbey Lee) who has a protein deficiency. With them is their young daughter Kara (Kylie Begley) and Chrystal’s mother (Kathleen Chalfant). The group walks through a cave that opens onto a small, white-sanded beach, with a healthy surf. It is sheltered by dramatic, steep cliffs making the cave the only obvious exit. Within a short time, Jarin and Priscilla emerge onto the beach, and they too are, at first, impressed with its beauty.

Although the families spread out their blankets and splash in the water, we are never at ease here, and neither are the guests. This might be because the body of a woman is soon washed up on the shore and, standing against the cliffs is a rapper called Mid-Sized Sedan (Aaron Pierre), in shock as the woman was his friend, and he is naturally accused of having killed her. Almost as disturbing, rusted cutlery is found in the shadow of the cliffs, and when anyone tries to leave through the cave entrance, they emerge, after having blacked-out, with fierce headaches.

In this second, middle section of the film, by far the longest, the pace picks up rapidly. Within a few minutes Guy and Prisca are stunned to notice that their children have grown, and Maddox needs a new bathing top. The cast changes are superb, and very unsettling, but to say more would spoil the fun – or the horror.

What is as confusing for the guests as the audience is that the rules of this Big Brother game are inconsistent. All the children age rapidly, and within no time, Chrystal’s mother dies of old age, but the leads do not age at the same rate.

And while many of the guests have physical health problems (an operation on one character is performed successfully because wounds heal instantly for some reason) Charles, who does not look older, seems to develop aggressive Alzheimer’s. His prejudices, hitherto controlled, become apparent in the targets of his knife attacks, and he is obsessed with remembering the name of the film in which Jack Nicholson and Marlon Brando appeared together (The Missouri Breaks).

In the third section of the film, we return to the resort for what should be the most satisfying part of the film, in which the controversial, timely ideas at the heart of the resort activities are explored. Sadly, this section is short-changed, as if Shyamalan had run out of time, which only highlights the plot holes and inconsistencies.

Why is the law enforcement officer so easily convinced of an absurd story related by two apparent strangers passing themselves off as hotel guests? How does a piece of paper, written in code, remain legible, and not all smudged, after a long, underwater swim to smuggle it off the beach? Why is there is so little resistance from the hotel staff to just three people whom they could easily overwhelm? And why focus on waitress Madrid’s reaction to the arrival of troublemakers at the resort if she is not an intended beneficiary of the beach experiments?

It is a credit to Shyamalan’s filmmaking that none of these flaws ruin the experience of Old, a film that sticks with you long after the credits roll. But the total creative autonomy Shyamalan gained after the success of The Sixth Sense, did not do him any favours between 2006 and 20015 when he delivered a string of duds. Old is certainly no dud, but with more work on the script, it could have been great.