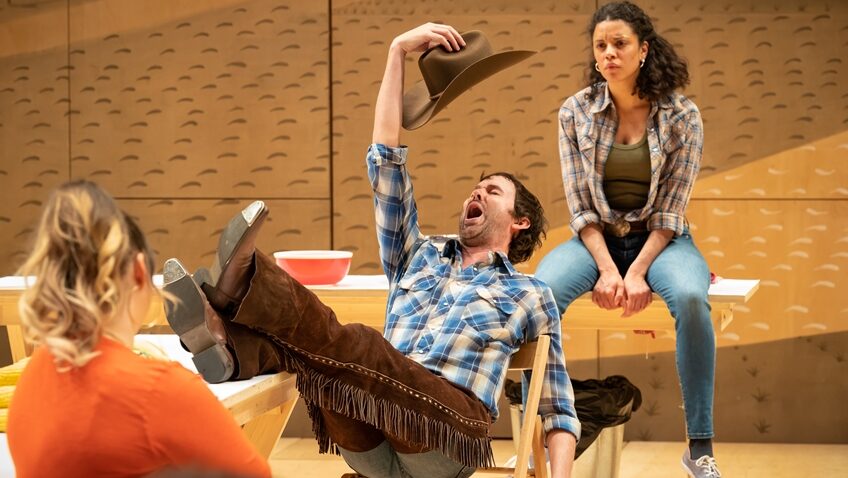 Richard Rodgers and Oscar Hammerstein’s Oklahoma! premiered in New York in 1943. A major landmark in the history of the Broadway musical, it went on to run for 2,212 performances.

The last time London saw Oklahoma! was at the National Theatre in 1998 when it was directed by Trevor Nunn and had Hugh Jackman in the lead.

The first thing to say about the present revival is that it is not a big Broadway musical production. Something rawer and more serious, something more intimate and immersive, has been attempted; perfect for a venue such as the Young Vic but not always so good for Rodgers and Hammerstein

The show, directed by Daniel Fish and Jordan Fein, and originally staged off-Broadway, has been re-thought and stripped back. It is on a small scale; small orchestra, small company, no chorus, no wide-open spaces. Their concept is an interesting exercise which doesn’t always work.

The Young Vic auditorium is totally unrecognisable. The theatre has been converted into a barn. The stage is traverse. There are just chairs and trestle tables with food. The cast sit around. They stamp on the plywood planks. The audience at times can be as brightly lit as the singers. Two scenes take place in a complete blackout.

The band is on stage with the cast. The songs we know so well are all there – O What A Beautiful Mornin”, The Surrey with the Fringe on Top, Kansas City, I Can’t Say No, The Farmer and the Cowhand, People Will Say We’re in Love, Oklahoma! – but the score has been completely re-orchestrated by Daniel Kluger and the songs sound quite different.

There are two love stories. Laurey (Anoushka Lucas) is loved by cowboy Curly (Arthur Darvill) and farmhand Jud (Patrick Vaill). Davis and Vaill repeat the performances they gave in New York. Jud is a much more sympathetic character than he has been in the past. Here, he does not fall accidently on his own knife in a brawl. He is shot by Curly.

Agnes de Mille’s choreography was a major part of the success of the original 1943 Robert Mamoulian Broadway production, famed for the iconic 15-minute dream ballet. There is a ballet at the Young Vic but it is a solo performance to a distorted, screaming score. Marie-Astrid Mence dances in a deranged manner, hidden sometimes in smoke and hidden sometimes by darkness.

Oklahoma! was the first time Rodgers and Hammerstein worked together. They would go on to write Carousel, South Pacific, The King and I and The Sound of Music, all of them still as popular as ever and regularly revived. Chichester Festival’s South Pacific will be touring the UK this autumn.