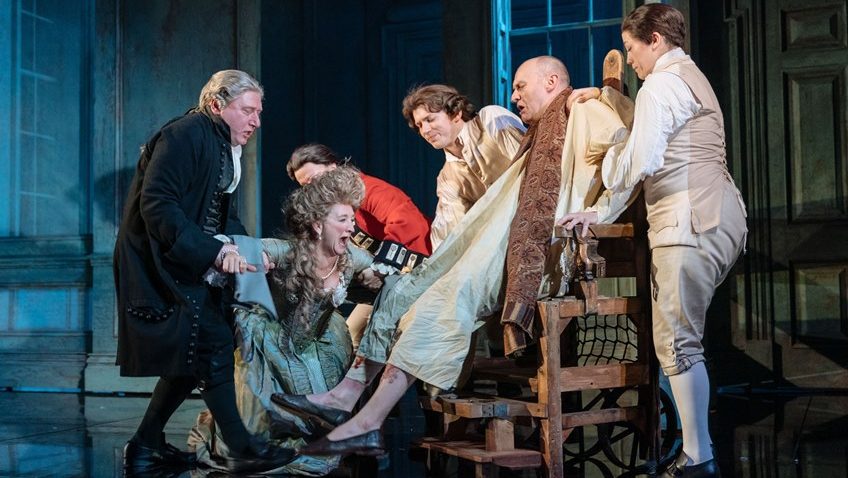 Robert Tanitch reviews The Madness of George III on line

Alan Bennett is on record as saying to Nicholas Hytner, who directed the premiere at the National Theatre in 1991 that he thought The Madness of George III unstageable. The text, with its numerous short scenes, is like a screenplay.

The king had his first bout in 1788; but he was never mad. He suffered from porphyria, a painful illness of the nerve system, with abdominal agony, near paralysis, racing pulse and babbling speech, sleeplessness, and rambling mental confusion. He had all the symptoms of madness but he was not mad.

The survival of the Tory government depends on the health of the king. If the king cannot regulate himself how can he regulate the country?

George III’s suffering, humiliation and torture is seen within the context of the political manoeuvres of Pitt (Nicholas Bishop) to keep power, Fox and the Whigs to oust him, and the Prince Regent to gain the throne.

The king’s doctors are caricatures, ignorant buffoons out of a Moliere farce. He is much better looked after by his loyal and loving servants.

The treatment is barbaric. The king is tied in a straight-jacket, strapped to a chair, gagged and blistered with hot glasses. He is even denied access to the Queen (Debra Gillett) he loves and who gave him 15 children. Gattis vividly portrays his torment

Scarborough does not cut a sinister figure as Charles Kay did at The National Theatre when you felt the king was in the hands of a lunatic and everything the king had been through had been totally unnecessary.

In Penfold’s production (as in the 1995 film version) Willis is much more humane and you come out of the screening and feel he has done some good.

George III’s madness is, at times, as painful and as distressing to watch as that of King Lear. Mark Gatiss looks as if he has stepped out of Hogarth’s painting of Bedlam in The Rake’s Progress.

The real King George III, a devoted husband and a conscientious monarch, was much loved. When his madness recurred in 1810 the theatrical profession, out of respect, stopped performing Shakespeare’s King Lear until after his death ten years later.