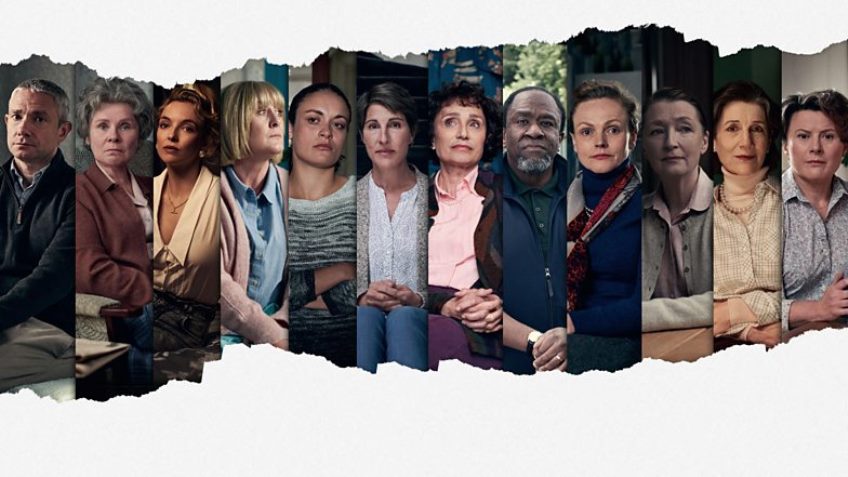 The success of Alan Bennett’s monologue, A Woman of No Importance, with an award-winning performance by Patricia Routledge in 1982, encouraged Bennett to write more monologues for television.

TALKING HEADS had two series: the first in 1988 and the second in 1989. These in-depth portraits were an excellent showcase for a cast which included the said Patricia Routledge, Thora Hird, Julie Walters, Maggie Smith, Stephanie Cole, Eileen Atkins, Penelope Wilton, David Haig and Alan Bennett himself.

Now, 30 years on there is a new cast of household names and two new monologues. They were all produced by Nicholas Hytner during the coronavirus lockdown. The actors, creatives and crew all adhered strictly to social distancing, everyone staying a minimum of two meters away from one another whilst filming took place.

Each monologue is a series of short scenes set in living rooms, kitchens, bedrooms, on staircases and in hallways. The actors address the cameras directly in close up. The monologues are confessional. The characters are sad and profoundly lonely.

Bennett writes about bereavement and grief, straight and homosexual love, murder and perversion. He is not afraid of taboo subjects: paedophilia, incest and mental health issues. He writes with wit, pathos, sharp intellect and astute observation of English mores and obsessions.

Bennett’s a great story-teller and the characters on-screen and all those off-screen come vividly to life. Each monologue lasts about half an hour. The actors are excellent.

A LADY OF LETTERS. Imelda Staunton plays the role created by Patricia Routledge. Johnathan Kent directs. Miss Ruddock, a busybody, spies on her neighbours and writes letters to all and sundry – doctors, opticians, chemists, local government, MPs, police, the vicar, always complaining. She even writes to the Queen. One letter brings in the social services. Another letter lands her in court. A third gets her a prison sentence. Her life is transformed. She is no longer a lonely, bitter woman. For the first time in her life she is happy, surrounded by inmates who befriend her.

AN ORDINARY WOMAN. Sarah Lancashire in one of the new monologues, Nicholas Hytner directs. A story of incest won’t worry audiences if it is an ancient myth (viz Phaedra) and told by Euripides, Ovid, Seneca and Racine; but they are uncomfortable if a nice modern 46-year-old mum is having a crush on her 15-year-old son and is not going to get over it because she doesn’t want to get over it.

SOLDIERING ON. Harriet Walter plays the role created by Stephanie Cole. Marianne Elliott directs. Muriel’s husband has just died. Her daughter has mental health issues. Her son takes over her affairs. She finds herself getting poorer and poorer until she has to sell her house and all her possessions and move into rented accommodation. Her son’s a thief. Her husband was a pervert. Muriel, very upper crust, puts on a brave face. “I’m not the tragic type,” she says (it is painfully obvious, she is). Walter is, vocally, pitch-perfect.

PLAYING SANDWICHES. Lucian Msamati plays the role created by David Haig. Jeremy Herrin directs. Wilfred works for the Parks Department. He’s a good conscientious worker; but his past is clouded. It emerges he’s a reformed paedophile. He still likes giving little girls sweets and playing sandwich with them. It’s not long before he’s back in prison. He blames irresponsible parents for not looking after their children properly and not taking precautions.

A CHIP IN THE SUGAR. Martin Freeman plays the role created by Alan Bennett. Jeremy Herrin directs. Graham, who has mild mental health problems, lives at home with his 72-year-old mum who falls in love with an old flame who wants to take her to Tenerife. Graham is frightened he is going to be pushed out of the house and forced to live in a hostel. Freeman gives one of his best performances.

OUTSIDE DOG. Rochenda Sandall plays the role created by Julie Walters. Nadia Fall directs. A crime thriller, a film noir. Marjory is clinically depressed. Is her husband a serial killer? He works in a slaughterhouse and is pretty brutal with her. When he is arrested, the police and the paparazzi make her life even more miserable.

BED AMONG THE LENTILS. Lesley Manville plays the role created by Maggie Smith. Nicholas Hytner directs. Bennett’s wittiest script. Susan, a vicar’s wife, an atheist and an alcoholic (who is liable to drink the communion wine) has no life of her own. Does her husband believe in God? The subject is never brought up. She has an affair with a 26-year-old Indian grocer and thanks to him she is able to deal with her alcoholism. The vicar takes all the credit and uses her rehabilitation in his sermons as proof of the efficacy of prayer.

NIGHTS IN THE GARDENS OF SPAIN. Tamsin Grieg plays the role created by Penelope Wilton. Sarah Frankcom directs. A neighbour, who indulges in S & M, shoots her husband and stands trial. Rosemary befriends her and finds their relationship far more enjoyable than anything she has experienced in 30 years of marriage. The two women love gardens. She visits her in prison and their friendship blossoms

THE HAND Of GOD. Kristin Scott Thomas in the role created by Eileen Atkins. Jonathan Kent directs. The antique business is about making a profit. Celia is a professional buyer with a condescending smile and she’s very good at making friends with old people before they die. She has an eye on one old lady’s treasure trove. She makes a major error of judgement and loses a fortune.

MISS FOZZARD FINDS HER FEET. Maxine Peake in the role created by Patricia Routledge. Sarah Frankcom directs. Miss Fozzard goes to a chiropodist and thinks it’s OK for him to lie down on a hearthrug and ask her to walk all over his back and bottom in shoes he has bought specially for her to be able to do so. She sees nothing wrong in a bit of perversion. She likes it. Meanwhile her brother, who has had a stroke and has difficulty speaking, is having it off with an Australian carer, who makes him pay for the sex he has with her and bankrupts him.

THE SHRINE. Monica Dolan in one of the new monologues. Nicholas Hytner directs. Lorna’s husband, birdwatcher and biker, died in a road accident. There were no witnesses. She turns the spot into a grave. She brings flowers and keeps the tyre stripes clean. She refuses to move on despite being urged to do so by the local council and the local priest. She does not want to move on. She wants to continue bearing witness to his death. She meets another woman and discovers her husband had had another life about which she knows nothing at all.

Which Talking Head is best? Well, that is for you to decide.