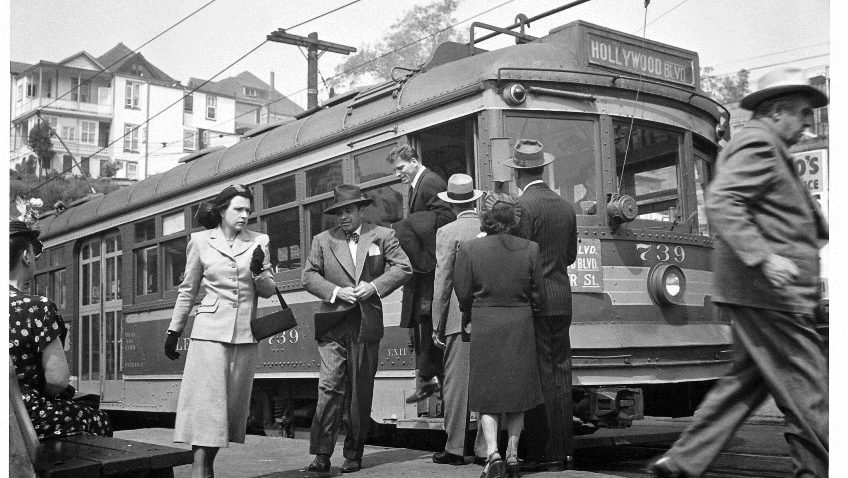 Everyone who has seen the great Film Noir director Robert Siodmak’s Criss Cross, arguably the darkest of the 1940s Noirs, has their favourite bits. And since Eureka ‘s Masters of Cinema series has produced an impeccable 4K restoration from the original nitrate negative, it is easier than ever to have yours. With the clarity of the images, you will notice everything in Franz Planer’s (The Big Country, The Caine Mutiny), stunning black and white cinematography; in Siodmak’s inventive, ingenious direction, and in the performances from a young Burt Lancaster (who had just made The Killers with Siodmak); a ravishing Yvonne DeCarlo (The Munsters (TV); The Deerslayer, Frontier Gal, The Ten Commandments, Brute Force); and villain Dan Duryea (Winchester ’73).

For many, a favourite scene comes at the very beginning, just after a night-time aerial view of a nightclub car park gradually zooms in on a couple kissing between two cars. Cars, which were in the 1940s turning LA into the fogged, freeway city it is today, and one armoured truck, play a prominent role in the film. Cars offer escape, but can just as well bring unwelcome guests and deliver you into the hands of evil.

The shot in question is an unusual close-up of a beautiful woman’s (DeCarlo) face. The woman, Anna, tells the man she has been kissing, Steve (Lancaster): “When it’s over, it will be you and me, just you and me, like it should have been from the start.” What is so startling about the shot is that Anna is speaking passionately and urgently right into the camera – as though we are Anna’s lover and co-conspirator.

In a few lines we learn that Anna and Steve Thompson have a past (they had a rocky marriage); that she is worried about something illicit they are plotting: “suppose something goes wrong?”; that she doesn’t “want him to see us coming in together”, the him, being her new husband Slim Dundee (Duryea). Steve left town, but his fatal attraction has drawn him back.

This taut exposé of the setup in the film’s first few minutes is not the only example of scriptwriter Daniel Fuchs’ talent. He has to make us care about a doomed, weak, boxer turned security guard, who is so much in love with his ex-wife, that he entices her gangster husband into a dangerous armoured truck heist as a way of reclaiming her. That this plan might backfire is what is worrying Anna, and what keeps us on the edge of our seats.

Fuchs and Siodmak also have to give life to a myriad of secondary characters, whose purpose is to make the twist-and-turns of a pulp thriller into a tragedy of classical proportions. These include Steve’s loving all American, family, a sacrificial old security guard who could have retired; a wise cop (Stephen McNally) who does all he can to save his school friend (Steve); and Mr Nelson (Robert Osterloh), an anxious husband in the hospital ward where Steve, an overnight hero, is recovering from a heist gone wrong and does not want to be alone.

In my favourite scene, Siodmak, Fuchs, and the peerless Osterloh keep us guessing whether Mr. Nelson is, as Steve first suspects, an agent sent by Dundee to finish him off, or, as the nurse believes, a kindly businessman whose wife is dying next door.

With a script this memorable, when Steven Soderbergh remade Criss Cross as The Underneath in 1995, he gave Fuchs co-writer credit on the remake. John Updike thought of Fuchs as “a poet…a magician who made magic look almost too easy.” Critic Cyril Connolly would have recognised the magic, as he did not think highly of Don Tracy’s 1934 underlying novel. He did qualify his unfavourable review: “but begin it at any page, nevertheless, and you can’t stop till you’ve read all the others.”

For many, a favourite scene will be Anna dancing with a gigolo to Esy Morales’ incredible rumba band. Since you are watching from home it will be hard not to get up and dance. But then you will miss professional dancer Decarlo dancing the rumba with an uncredited Tony Curtis in his screen debut. And you might miss the orchestration of the complex shot on the dance floor when Steve, who has been watching Anna dancing from the side-lines, walks across the room to her table after their eyes lock across a crowded room.

This is all part of Fuch’s elaborate, long flashback that tells the story of how the two lovers in the car park ended up there. Continuity must have been a nightmare.

If you have been to L.A., have read Raymond Chandler, or have grown up watching films shot there from the silent movies to L.A. Confidential, your favourite bit could just be the fabulous location shooting.

Reason enough to own the Blu-ray: you will want to see how Siodmak uses the dilapidated Sunshine Apartments, where the gang plot the heist, to maximum effect. Throughout the long night of planning we watch, through a rear window, The Angels Flight funicular (the world’s shortest railway) carry weary souls up and down the Third Street steps between Hill and Olive like the Streetcar named Desire. The apartments were part of the “slum clearance” that did away with his historic neighbourhood in the 1960s, in one of the most reprehensible and short-sighted decisions in the annals of city planning.

You can also glimpse the newly built County Court House, used for exterior shots in the late 1950s’s television series Perry Mason. Perry Mason has just been remade by HBO and available here. But they don’t make ‘em like they used to, so here’s a tip: see Criss Cross. And when you are finished, you can watch it again in silent mode for a fascinating running commentary by Lee Gambin and Rutanya Alda. Other assets with the Blu-ray include a collector’s booklet with writing by film historian Kat Ellinger and Adam Batty and a new video piece by film scholar Adrian Martin.