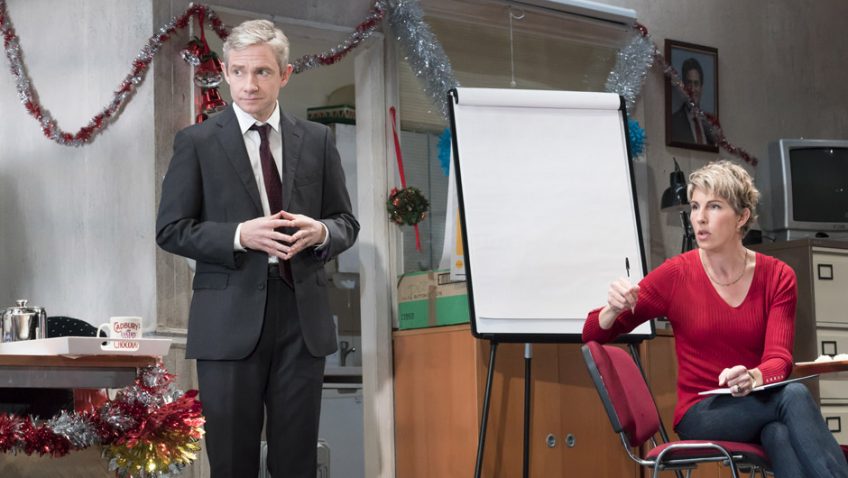 Michael Grandage Company and Headlong join forces to present a political play about the schism within the Labour Party between Old and New Labour and the doctrinal in-fighting which keeps them out of power and makes them permanent losers.

The author is James Graham, who is the author of the highly successful This House. Tamsin Grieg in Labour of Love

Graham now has two plays on in the West End at the same time. Ink is practically next door at the Duke of York’s Theatre which should be advantageous to the box offices of both theatres.

Freeman plays a Labour MP in a Nottinghamshire constituency and he is about to lose the seat he has held for 27 years. He is a pragmatic Blairite who knows that the only way for Labour to get back into power is to play from the centre and not from the far Left

Grieg is the MP’s constituency agent, an idealist, who is on the far Left; but who is, nevertheless, fiercely loyal to him. They have a relationship, which, in the play’s final moments, recalls Beatrice and Benedict in Shakespeare’s Much Ado About Nothing.

Jeremy Herrin’s production bridges the scenes with newsreel footage of former Prime Ministers and politicians whilst the actors change their clothes and hair styles to look either younger or older. Act One begins in 2017 and goes back to 1990. Act Two goes from 1990 to 2017.

Martin Freeman, giving one of his best performances, is totally believable in his political commitment. He has considerable charm and there is a delightful moment when he proves he is a hoofer. Tamsin Grieg, who took over at very short notice from an indisposed Sarah Lancashire, is totally on top of her role and knows exactly how to deal with the barbed sarcasm which is such an essential feature of Graham’s script.

Rachel Stirling is cast the MP’s wife who had ambitions for her husband to be in the cabinet or even PM and never expected him to spend his whole career in the sticks.

There are 20,000 tickets at £10 throughout the run of Labour of Love which should make it very accessible to young audiences who are politically inclined.