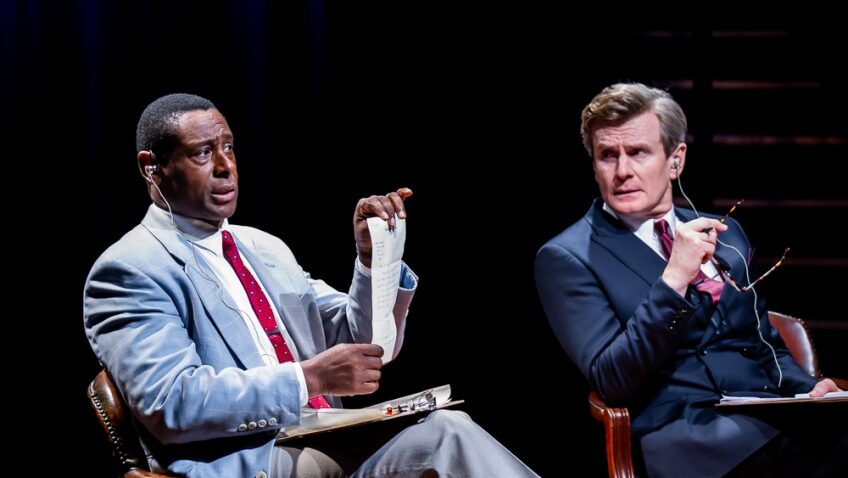 Robert Tanitch reviews James Graham’s The Best of Enemies at the Young Vic in London.

ABC television in 1968 needs to boost their ratings and decides the best way to do it would be to film a debate between two public intellectuals analysing the politics at the presidential nomination convention.

1968 was the year of the assassinations of Martin Luther King and Robert Kennedy. Russia invaded Czechoslovakia. There were student protests throughout Europe. Enoch Powell delivered his Rivers of Blood Speech. 1968 was a major turning point in the Vietnam War.

James Graham was inspired to write his play after he had watched The Best of Enemies, the 2015 American documentary by Morgan Neville and Robert Gordon. The words spoken on camera are documented. All the dialogue off-screen is Graham’s invention.

Vidal’s mantra was “Never refuse sex and the chance to appear on TV.” Vidal, like all good wits, rehearsed and polished his famous waspish spontaneity. Vidal accused Buckley of being anti-black, anti-semitic and warmongering.

The debate inevitably turns into a spat, which was great for ABC whose ratings soared above all the other channels. The debate ends when Vidal calls Buckley a crypto-Nazi and Buckley calls Vidal a queer.

Who is the better person? Who does the public like most? Is there not a better way to present politics on TV? We live in an age when the public, with a short attention span, prefers personalities to facts and chooses the wrong people to be their leaders.

The play has a very good cast and is excellently directed by Jeremy Herrin who keeps up the pressure with an amazing theatrical production. David Harewood is Buckley. What Buckley would have thought about the irony of a black actor playing him is not hard to imagine.

Charles Edwards is Vidal. Syrus Lowe is James Baldwin. There is a fine ensemble of actors all playing multiple roles. Good use is made of archival television footage.

The Best of Enemies is aimed at an audience who enjoy debates and are prepared to listen. It’s a pertinent play for divided nations on both sides of the Atlantic.