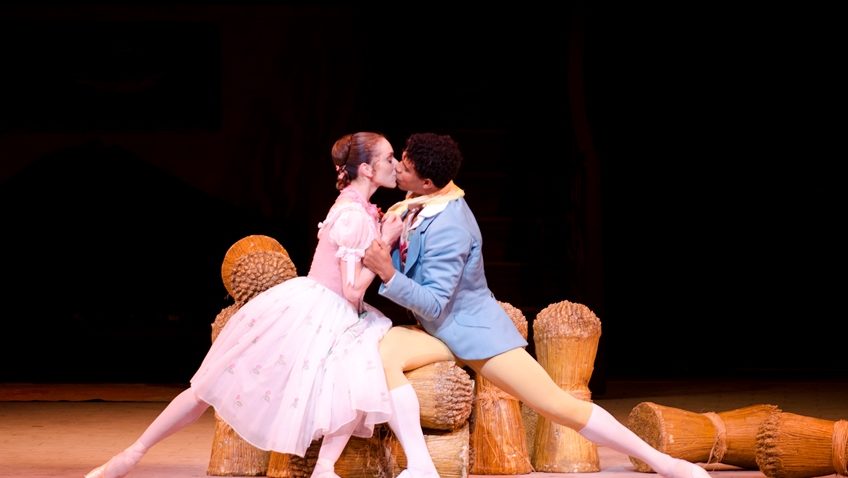 This performance of Frederick Ashton’s ballet at the Royal Opera House with Marianela Nunez, Carlos Acosta, Will Tuckett and Jonathan Howells dates from 2005.

The original scenario was created by Jean Dauberval in Bordeaux in 1789 on the eve of the French Revolution. It was a turning point in the history of the ballet, a breakaway from the pseudo classical tradition.

Dauberval took his inspiration from rural life and got rid of artificial shepherds and shepherdesses so favoured by Marie Antoinette and her circle. His characters were ordinary people, farm lads, and milkmaids.

Ashton’s version – “a leafy pastoral of perpetual sunshine” – was premiered in 1960.

“At some time or another, every artist pays tribute to nature,” said Ashton, who had been reading Dorothy Wordsworth’s Journals and listening to Beethoven’s Pastoral Symphony whilst in his Suffolk home.

The ballet, lyrical and sentimental with a bit of pantomime knockabout, couldn’t have been more English. It was an immediate success with critics, public and little girls who loved Shetland ponies. Marie Rambert hailed it as the first great English classic.

The music by Ferdinand Harold was freely adapted and arranged by John Lanchbery. Osbert Lancaster designed the front drop and sets.

A widow’s daughter falls in love with a young farmer and thwarts her mother’s plans to marry her off to the idiot son of a wealthy farmer. Marianela Nunez is an adorable, naughty and sexy girl who has no difficulty in outwitting her mother.

Carlos Acosta, dressed in yellow tights and natty floral waistcoat, is a manly, charismatic and muscular cock of the farmyard. His bravura levitations and pirouettes have the audience cheering.

The affection between Acosta and Nunez is manifest throughout. He brings a great deal of tender sexiness and humour to his role.

There is a short scene when he is churning butter which is as explicit in its eroticism as the scene Patrick Swayze and Demi Moore acted at the pottery wheel in the film, Ghost.

After a hard day’s work in the fields the labourer (in ballets) likes nothing better than an exhausting dance with scythes, sticks and pretty pink ribbons round a maypole. The ribbons are put to a variety of uses. The lovers, twining and ducking, manage to create a cat’s cradle.

The Widow has a clog dance, a classic music hall turn in the tradition of the great Dan Leno, the greatest pantomime dame and champion clog dancer of the world. Will Tuckett’s widow is very nearly garrotted by her spinning wheel.

There is some good farce when she locks her daughter in her bedroom, not knowing that the lover is already inside the room. The couple are later discovered in flagrante delicto.

Jonathan Howells is the rejected lover, who behaves like a six-year-old, riding his beloved red umbrella as if it was a hobby horse.

Some may find Ashton’s La Fille mal gardée a bit too twee but a far greater number of people are going to love it. It has a light touch, bags of charm and it’s funny. It’s a perfect introduction to classical ballet for very young children.