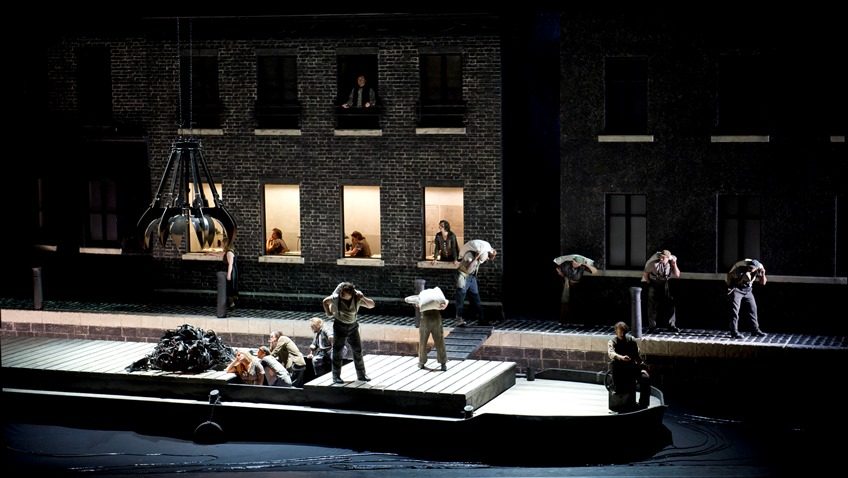 Giacomo Puccini’s Il Trittico had its premiere in New York in 1918. He had long wanted to do a collection of operas in one night.

Impresarios are not keen on double-bills, let alone triple bills. Audiences don’t like them. The chance to see the triptych as a triptych is rare.

This production, sharply directed by Richard Jones and excellently conducted by Antonio Pappano for the Royal Opera House, dates from 2011.

The sordid melodrama, set on a barge on the Seine in 1910, has been updated to the 1950s. Designer Ultz provides a dark and gloomy quayside.

A bargee thinks his wife is a slut. Puccini ratchets up the emotion. Lyrical duets alternate with murderous arias.

Giorgetta (Eve-Maria Westbroek) and her hunky lover Luigi with a big voice (Alexandrs Antonenko) dream of a better life. They long to go to Paris but they are trapped and they know it.

Michele (Lucio Gallo), the bargee, forces Luigi to admit his love and chokes him to death. He hides the body under his cloak and then (for a grand guignol climax) invites his wife to bed with him under it.

The opera is set in the cloisters of a nunnery in the 17th century. Richard Jones updates it and sets it in a modern children’s hospital. The nuns are all nurses. The spacious and airy ward (designed by Miriam Buether) is brightly lit.

Angelica is the daughter of a noble family. She has not heard from her family for seven years. She had an illegitimate child and was forced by her aunt (her parents being dead) to give the child away and take the veil.

The dramatic high spot is the arrival of the aunt, who wants Angelica to remain a nun for ever and atone for the rest of her life.

When Angelica learns her child has died, she poisons herself so that she can join him in heaven. She realises too late she has committed a mortal sin and is damned. She begs the Virgin Mary for mercy.

The opera ends with the appearance of the Madonna and Angelica’s child. They have come to lead her to heaven. Jones does away with this excruciating sentimentality. There is no smile from the Holy Mother in his production.

Instead Jones has a mad hysterical Angelica mistake a sick child in the ward as her child risen from the dead. It makes the opera feel even more anti-Roman Catholic than it already is.

Ermonela Jah, in her fury that her baby was taken from her and also in her anguish in the great lament, Senza Mamma, has tremendous power.

Anna Larsson, tall, dressed all in black, carrying an animal fur, a sophisticated, aristocratic figure, is chilling in her cruelty.

Gianni Schicchi is that rare thing – a farcical opera. Often played on its own, it’s great fun. Here, coming directly after the gloom of Il Tabarro and Sure Angelica, the fun, broad, crude, and boisterous, is even more enjoyable.

The farce, a fantastic prank, set in medieval Florence and based on an episode in Dante’s Inferno, has been updated to the 1950s. A man lies dead in bed. The bedroom (designed by John McFarlane) has the sort of ghastly floral wallpaper you would (viz Oscar Wilde) definitely die for.

The dead man’s mourning relatives, expecting a fortune, discover they are not beneficiaries of his will and that he has left all his money to the monks.

The extended family is a bunch of caricatures and Richard Jones wittily has them bunched tight together and moving like a phalanx. The squabbling the blatant greed, the feigned grief for the dead man and the real grief over the loss of money, all make for good farce.

There is only one thing for the family to do and that is to tear up the will and re-write it. Gianni Schicchi, famed for his cunning, takes the place of the dead body and dictates a new will to a notary in which the rascal awards himself the largest inheritance.

In a 13th century context, Gianni is a Falstaffian rogue. Updated to the 20th century and played by Lucio Gallo, Gianni is much nearer to John Cleese.

“O mio babbino caro” (“Oh my beloved daddy”) is one of Puccini’s most popular operas. Coming in the middle of all the farcical goings-on, it sounds as if Puccini, tongue in cheek, is sending himself up. Katerina Siurina and Francesco Demuro give their arias the full Puccini lyrical impact.

You can watch Il Trittico by clicking here.