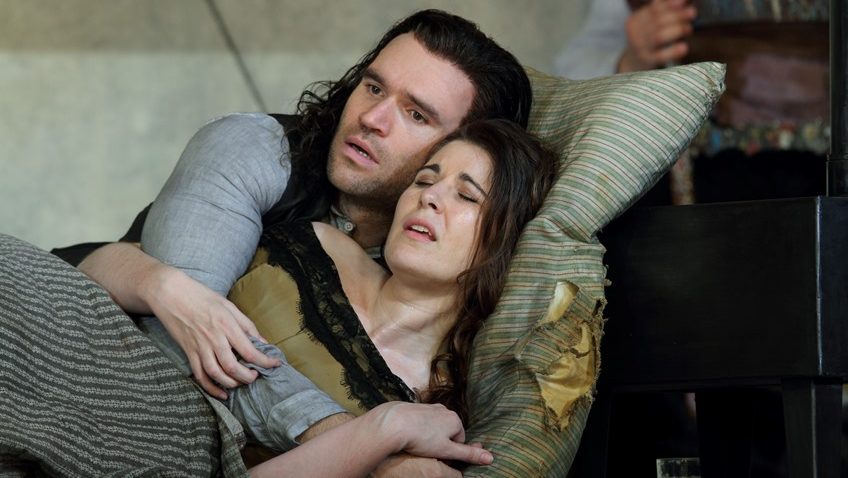 It is hard to believe that Giacomo Puccini’s La Bohème could have failed at its premiere in Turin in 1896, when it was conducted by the 28-year-old Toscanini.

It’s one of the great tearjerkers of all time and one of the most popular operas ever written.

The libretto is based on Henri Murger’s autobiographical novel, Scenes de La Vie de Boheme, first published in 1848 and dealing with his youthful artistic struggles, which had taken place some twenty years earlier.

It is the definitive statement about love among the artists in Paris’s Latin Quarter in the 1830s.

This performance, directed by Richard Jones and conducted by Antonio Pappano, was seen at the Royal Opera House in 2017 with Nicole Car, Marcel Fabiano and Marius Kwiecien.

When La Bohème is well sung and acted as it is here, I could go on listening to Puccini’s gorgeous music for ever.

But anybody, who was brought up on the ROH’s previous production by John Copley and designed by Julia Trevelyan Oman, is going to be disappointed with the set.

The attic looks like it has been plonked on the stage in the middle of nowhere and is waiting to be furnished. It doesn’t look lived-in. It’s a stark empty shell with just an old stove and spotlessly clean beams. Presumably all the furniture has been burned as firewood.

The second act, set in the busy streets, arcades and restaurant, is so opulent that it feels like a completely different production. The Café Momus set looks far too posh and expensive for impoverished Bohemians.

Musetta (Simona Mihai), a very drunk grisette, sings her waltz standing on the tables. She takes off a shoe, puts her foot in people’s food and then, the coup de grace, takes off her knickers and dumps them in the lap of her lover Marcello (Mariusz Kwiecien). Why not his face?

So much money has been spent on Act Two that there is no money left for Act Three. The tavern looks as though it is stranded in an empty space.

In Act Four we are back in the stripped-bare attic and the Bohemians are behaving like little boys, scribbling all over the beams and drawing silly pictures over the wall and door. There’s not even a bed for Mimi to die on. She dies on a rug on the floor, her head resting against the stove.

Rodolfo (Marcel Fabiano, impetuous) and Mimi (Nicole Car, vulnerable), sharing autobiographies and their dreams in Act One and saying goodbye in Act Three when they are joined by Marcello and Musetta (who are having one of their usual quarrels) are the opera’s high spots. The emotional intensity and drama are there for all to hear.