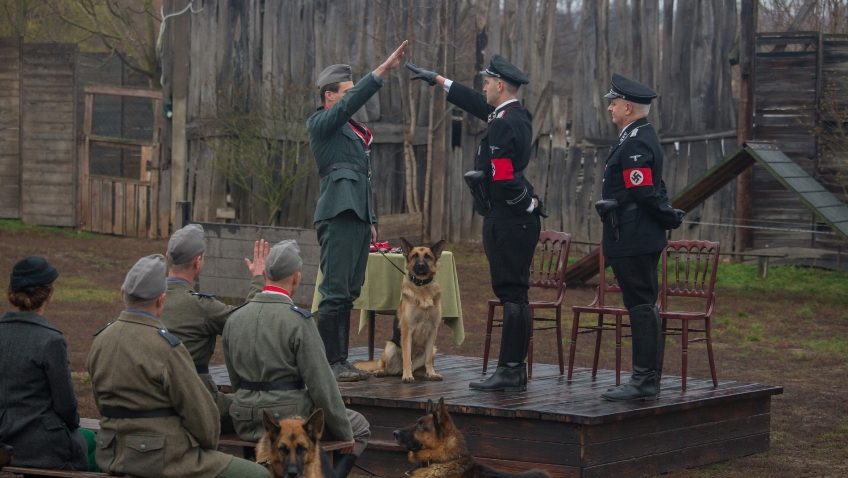 Lynn Roth’s multigenerational adaptation of The Jewish Dog is a compelling, if a tad clunky, addition to Holocaust fiction.

Shepherd: The Hero Dog is the second film in the last two years to introduce German shepherd guard dogs as characters in Nazi films – or the third film if one counts the visual pun joke in this year’s Academy Award winning (Best Script) Jojo Rabbit.

Last year, Adrian Panek’s psychological horror movie Werewolf presented an allegory of how WWII Germany turned men turn into beasts and dogs turn into evil murderers. Now Lynn Roth’s (The Little Traitor) adaptation of Israeli writer Asher Kravitz’s novel The Jewish Dog mixes fiction and fanciful in a new spin on the boy-and-his-dog genre, set against the barbarity of the Holocaust. Shepherd: The Hero Dog is a compelling and well-made film, even if Roth whitewashes some of that barbarity to appeal to a young audience and loses some of its power with some awkward dialogue and acting.

The first quarter of the film is both familiar and chilling as a loving middle-class German family slowly but surely become victims of the growing anti-Semitism in the 1930s. The family is distinguished in one way in that they love German Shepherd dogs, even in the confines of their city apartment. When the family dog has a litter, young Joshua (August Maturo) is allowed to keep the pup he falls in love with and names Caleb. In Hebrew, that means “devotion to God.”

Unfortunately, like so many Jews who fought in WWI for their country and flourished in the aftermath, Joshua’s father ignores the writing on the wall until it is too late. Ironically, it is when the Nuremberg laws are passed banning Jews from owning dogs that the horror of the reality hits home. When Joshua is out, his father sells the dog so it, at least, stands a chance.

The new owner is a kindly German man who lives in the suburbs with his dog-hating wife. The poor chap is delighted to have a companion as his wife treats him no better than the new pet. But Caleb escapes and somehow finds his way home. Roth tears at the heart strings when we see Caleb sitting outside the old apartment – now owned by a prosperous young German couple – in the rain and sleet, waiting for Joshua to come out and feed him.

Eventually, after running with a pack of wild dogs, Caleb is rounded up the way his human family must have been, and the large, strong dogs are chosen for training, while the small dogs or runts, are exterminated.

Caleb’s new owner is a handsome young SS Officer, Ralph, (Ken Duken) who bonds and who names his new dog Blitz, the best trainee dog of the bunch. When Ralph and Blitz are sent to work in a concentration camp, Ralph is singled out for commendation because his dog is so effective at catching escaping Jews.

To Roth’s credit, the film’s big coincidence seems more implausible on paper than in the film, and Joshua is now surviving in the the same camp as Kaleb. You might be surprised to find yourself wondering how they are going to be reunited and what will happen when the dog’s split allegiances are tested. A hint is that the novel is set again the prisoner revolt in Treblinka in August 1943, but this is a film that wants to teach young people about the Holocaust without being overly graphic or tied down to historical re-enactments.

The novel tells the story from the point of view of the dog, with dark humour and dramatic irony as the dog is naturally naïve and we are not. As we saw with last year’s remake of Jack London’s Call of the Wild, it is tricky telling a story from the dog’s point of view, and so Roth’s decision was probably for the best.

It is a shame, though, that, whether for commercial or legal reasons, Roth does not use the title of the underlying material, The Jewish Dog. It is a thought-provoking and intriguing title that goes to the heart of the matter. And it is strangely reminiscent of the writer Lorrie Moore’s powerful modern-day love story, The Jewish Hunter with its memorable line: “Jews aren’t supposed to hunt, I know,” he said. “But in this part of the country it’s best to have a gun or two.”

You can read our review of Werewolf by clicking here.

You can read our review of Call Of The Wild by clicking here.