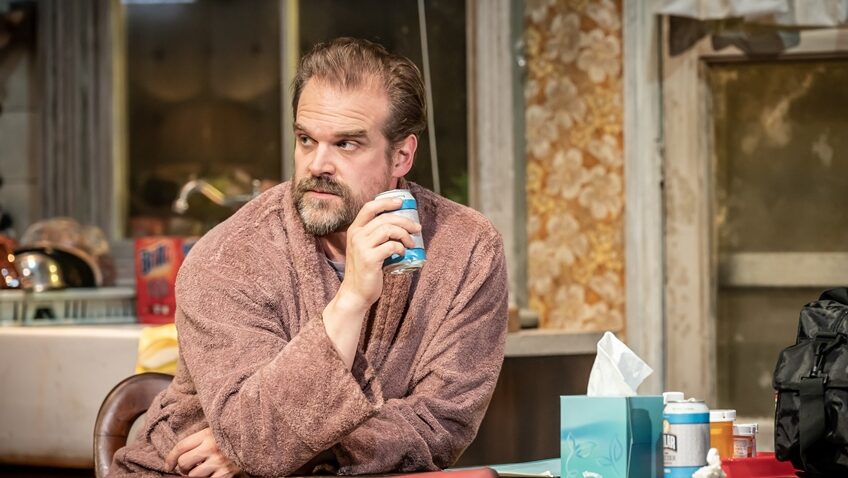 Theresa Rebeck’s old-fashioned American melodrama is described as a blistering dark comedy about death and madness.

This dysfunctional family saga is set in rural Pennsylvania and was specifically written for David Harbour and Bill Pullman.

I thought at first that we might potentially be in Sam Shepard Gothic country and all its attendant savagery. Wishful thinking on my part.

Pullman plays a nasty, crusty old dad who likes whisky and hookers and takes pleasure in riling his family. He is dying and being looked after by his eldest son.

Harbour plays the oldest son, who has been recently released from hospital where he had been confined because of his mental health issues. Harbour has the more likeable role.

Dad also has a professional female carer. His daughter and younger son can’t wait to get their hands on his money which is in the value of his house and estate.

Dad remains off-stage for too long in the awkward second act and not all the actors are as well cast as the two leads. But then their roles are not so well written.

Moritz von Stuelpnagel directs. There is too much shouting and yelling. The play needs a lot more work on it. I felt I was watching a work in progress. The production ends in a black-out, which was so abrupt that nobody was certain the play was over.

A claque was very audible on the night I saw the play. The claque members need more rehearsal in subtlety and they should be discouraged from openly reacting to dialogue in advance of its full delivery.