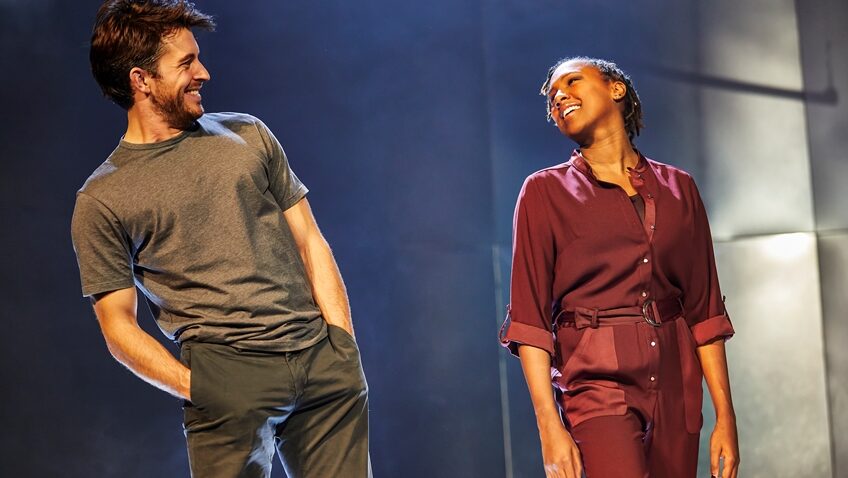 Mike Bartlett’s Cock premiered at the Royal Court Theatre Upstairs in 2009 with a cast which included Ben Whishaw, Andrew Scott and Katherine Parkinson. The title may still put some people off seeing it.

Bartlett’s abrasive play tackles questions of sexuality and identity in a series of short and sharp bouts. How do you identify? There are so many categories these days.

A young man (Jonathan Bailey), coming to terms with his sexuality, cannot make up his mind whether he wants to live a gay fractious life with his long-term partner (Taron Egerton) a broker, or a straight life with a first-time girlfriend (Jade Anouka), a divorcée teacher.

Marianne Elliott’s production, with its fluorescent lighting and chrome mirrored walls, is highly stylized. There are no props; only mime. The stage revolves during the jump cuts between scenes.

The production, acted straight through in 1 hour 45 minutes without interval, is notable for its physicality and hyper-active body language. The movement is choreographed by Annie Linette Deakin-Foster in such a way that the actors are capable of acting explicit sex scenes without any sex and nude scenes without any nudity.

The biggest laugh is Jonathan Bailey’s physical response to a woman’s question, “Would you consider sleeping with a woman?” He is literally blasted away.

Bailey, who was hilarious as a hysterical gay, terrified of marriage, in Marianne Elliott’s production of Stephen Sondheim’s Company in 2018, has the charisma necessary to play the lead role in Cock and keep the audience engaged in this unappealing vacillating character.