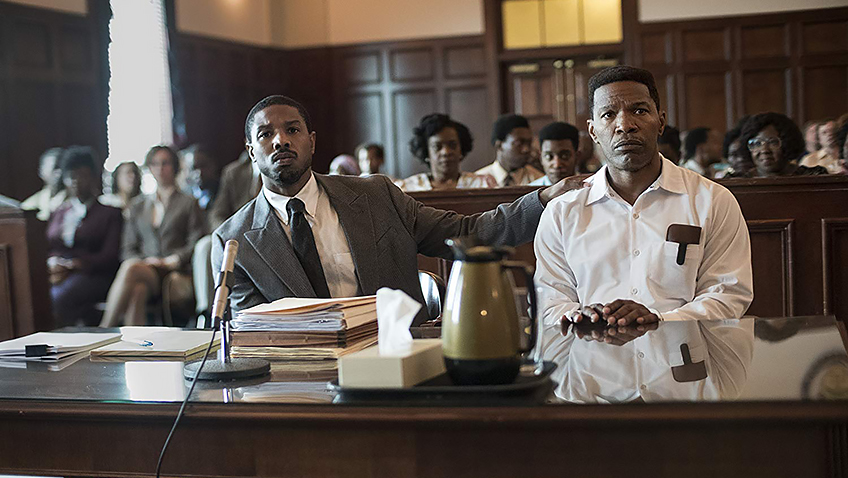 For the past 30 years (and counting) civil rights lawyer and social activist Bryan Stevenson, (played by Michael B. Jordan, Black Panther, Rocky, Fruitvale Station), has been one of the unsung heroes of America. One out of every nine inmates of death row are innocent, a caption tells us and this Harvard Law School graduate from rural Delaware, who encountered race discrimination as a child, has exonerated 140 of them – free of charge. The fact that there isn’t a statue of Stevenson in front of the Supreme Court, or that he is far from a household name contributes toward his selfless heroism. Director and co-writer (with Andrew Lanham) Destin Daniel Cretton’s Just Mercy

, based on Bryan Stevenson’s memoir (Just Mercy: A story of justice and redemption

), is a fitting, credible and earnest tribute to this remarkable man, but as a piece of entertainment, it lags behind recent discrimination courtroom dramas like Marshall, Loving and On the Basis of Sex.

As an intern with the Southern Justice Defense Committee, who had not yet earned his law degree, Stevenson meets his first death row prisoner. He is astonished to find an engaging man of his age with whom he has a lot in common. That one encounter influenced his decision to eschew more lucrative offers from commercial law firms, and, ignoring the pleas of his fearful mother, move to Monroe, Alabama. Here, with the help of Eva Ansley (Brie Larson), an attractive young woman who is married with a young son, and a grant (which remains frustratingly vague in the film) , he opens the Equal Justice Initiative in Alabama.

While it seems that the real Stevenson moved to Atlantic and Montgomery, the Monroe setting resonates for being the setting of Harper Lee’s To Kill A Mockingbird and the filmmakers do not miss the chance to underscore the irony of this coincidence. Everyone, including the white, racist District Attorney, Tommy Chapman (Rafe Spall) suggests that Stevenson visit the courtroom: the town’s biggest tourist attraction.

Echoes of Harper Lee’s novel bounce off the penitentiary walls where staid, mild-mannered Stevenson goes to interview former self-employed pulpwood worker Walter McMillian (Jamie Foxx), who, in the first scene in the film, we see being stopped by racist cops, mistreated and arrested without knowing the charge. Known locally as Johnny D, we learn that McMillian/Johnny D’s only crimes are a minor bar room brawl and a roving eye, which Minnie resents, but is resigned to living with.

When Stevenson meets McMillian, he is languishing on death row for the murder of an 18-year-old white woman in a dry cleaners’ shop. Stevenson is astonished to learn he was put on death row before he was even tried and convicted. He is cynical, hardened and suspicious after being let down by half-heartened public defence lawyers and two rejected appeals. As Stevenson quickly discovers, no one has looked at the evidence which is less than circumstantial and based only on a false eyewitness and the evidence of a police-pressured convicted murderer, with mental health problems, Ralph Myers (Tim Blake Nelson, The Ballad of Buster Scruggs). 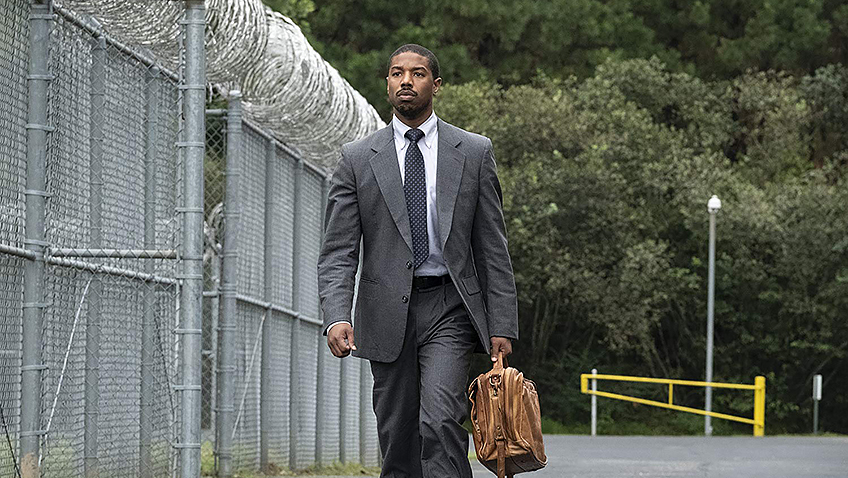 Michael B. Jordan in Just Mercy

McMillian and Minnie (Karan Kendrick) have been married for 25 years and have nine children. They live “down a dirt track” – a track that Stevenson knows well. The first thing he does after meeting with McMillian is to visit the family and reassure them that he is not going to quit or take their money. News of the visit impresses McMillian and gives him hope. By gaining the family’s trust Stevenson garners critical information which, you assume, his predecessors had missed. When he learns that there is solid evidence (not to mention many eyewitnesses) that Walter was at a community fish fry on the morning of the murder and nowhere near the dry cleaners’, Stevenson begins to appreciate how unsound the conviction was and is.

Cretton’s job is to stack the odds so heavily against McMillian that the audience is outraged. He does not have to try hard with the bigoted sheriff (who, we read in a coda, only retired last year) and DA. When presented with all the new evidence, Chapman’s reply is more like a threat than an apology for corruption: “If you go digging into this case, you’re going to make a lot of people unhappy.” To this Stevenson replies, “It’s not my job to make people happy, but to achieve justice for my client.” To achieve this, he gets the case aired on the prestigious national CBS program Sixty Minutes and appeals to Alabama’s Supreme Court. 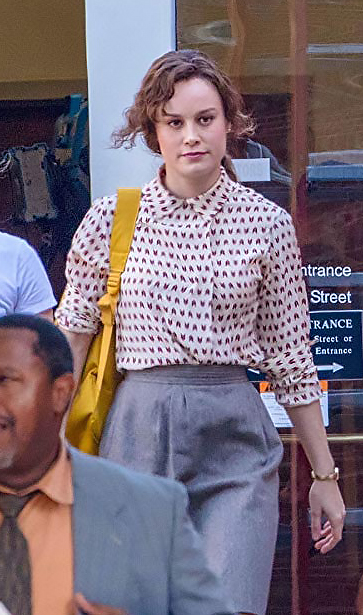 If Stevenson sounds like Atticus Finch, as a character in a film he is open to the same criticism of saintliness. The fact that Stevenson and Ansley are still, 30 years on, but with a large team now, and, hopefully, minus the death threats, working together on pro bono cases, only supports the case for canonisation. There is never a suggestion of intimacy between Stevenson and Ansley, despite all-nighters at the office, and we do not see Stevenson date, go to parties or have a few drinks. He files complex stays of execution the night before an execution with the same calm with which he approaches everything.

In terms of a film, this presents some problems as Stevenson is so unassuming, quiet, and unflappable that even the actor who played the troubled, frenzied kid from Fruitvale Station; the US Black Ops veteran who overthrows Black Panther and the son of Rocky nemesis Apollo Creed in the film Creed, fails to connect with the audience on a human level.

Of course, Stevenson was not there to entertain but to achieve justice, but this is a feature, not a documentary or a law course and if Fernando Meirelles and Anthony McCarten could make the eponymous heads of the Catholic Church human with humour and pathos in The Two Popes, anything is possible.

While you know what the outcome will be for Johnny D, the more interesting and moving scenes feature Herbert Richardson (Rob Morgan), a mild-mannered war veteran suffering from PTSD, and pangs of remorse for planting a bomb that he never thought would harm anyone. He has no family or friends other than Stevenson and his mates on death row: McMillian and Anthony Ray Hinton (O’Shea Jackson Jr.), who was falsely imprisoned for 30 years.

Along with Morgan’s performance as Richardson, another contender for Best Supporting Actor is surely Blake Nelson, whose portrayal of Ralph Myers is nothing short of electrifying. With his deep Southern drawl, facial tics and physical deformity, Myers is both chillingly unpredictable and movingly vulnerable in two key scenes that are alone worth the price of admission.