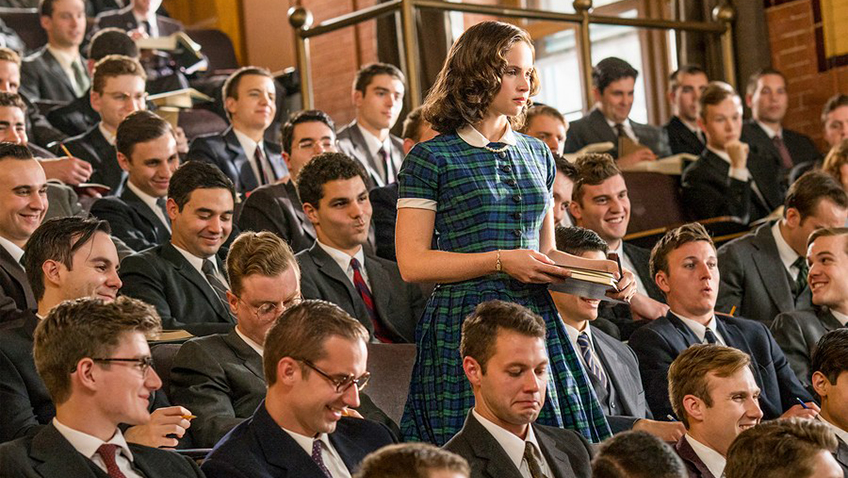 The great Ruth Bader Ginsburg’s origins story is no match for the real thing, but truly inspirational

If you haven’t seen the Academy Award and BAFTA nominated documentary, RBG you might have a hard time believing any of On the Basis of Sex: Mimi Leder’s inspirational feature about Ruth Bader Ginsburg. Who do you know, after all, who is a carer; new mother and a Harvard law school student, editing its Law Review? And how many university lecturers and mothers of two are married to a perfect husband, while quietly changing the laws and culture of gender inequality across the USA? 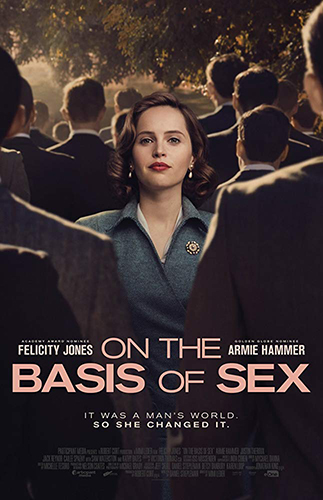 Some dramatic licence aside, you will believe all of the above, and not just because the script was written by RBG’s nephew, Daniel Stiepleman. On the Basis of Sex is a biopic of current 85-year-old Supreme Court Justice Ruth Bader Ginsburg, who appears as herself at the end of this film. Now, as at the beginning of her career, she is fighting a lonely corner in the conservative US Court. If the film is no match for the real thing, and follows a familiar pattern, it is, like the uplifting film Marshall, which it resembles, one of the more enlightening biopics of courtroom underdogs.

Stiepleman and Leder do not have to exaggerate when it comes to building up the obstacles RBG faced. It is only the 6th year that women have been admitted to Harvard Law School, and the nine female students are hardly feeling welcomed. When RBG/Ruth (Felicity Jones) is asked why she has taken a job from a worthy male candidate her sardonic reply is not missed on Dean Erwin Griswold (Sam Waterston). In a contracts class, the professor calls on the male students, avoiding Ruth, although she turns out to be the student with the most impressive answer.

Martin, or Marty (Armie Hammer) and Ruth had fallen in love as undergraduates at Cornell University and transferred to Harvard Law School as newlyweds with a little baby named Jane. When Marty is diagnosed with cancer with a 50% chance of survival, Ruth has no time for despair, depression or self-pity. She not only nurses Marty at home and attends her classes, but sits in on his classes, typing up lecture notes and his course work in the early morning hours.

Three years later, the obstacles mount again when Marty, his cancer in remission, lands a job at a NYC tax firm, but Ruth still has a year to go at Harvard. Griswold refuses to allow Ruth to graduate with a Harvard degree while attending classes at Columbia Law School and she transfers to Columbia to keep the family together. 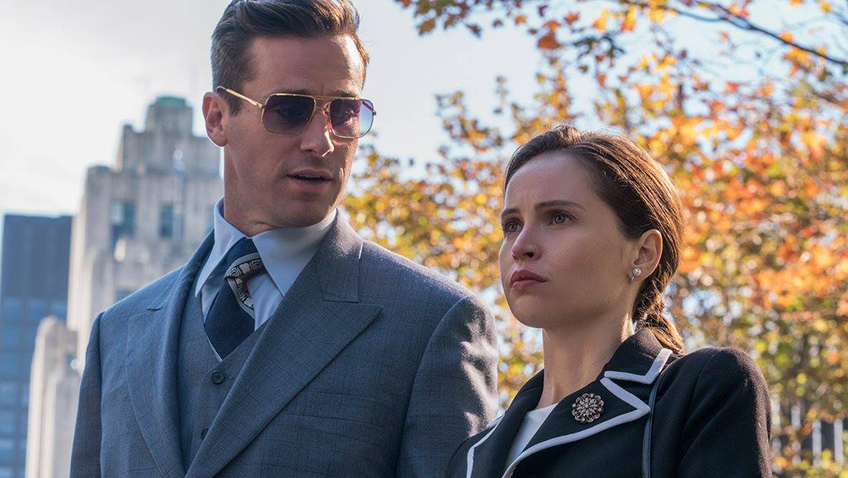 Felicity Jones and Armie Hammer in On the Basis of Sex

Despite her superior academic record, Ruth cannot get a job at any New York law firm (a job interview included in the film is shockingly sexist), so she reluctantly takes a job teaching a new class at Rutgers: The Law and Sex Discrimination. Her inspired pupils will later help her as researchers with her first case as an advocate.

In 1970 Marty tells Ruth about the case of Charles E. Moritz (Chris Mulkey), a tax case with ‘sex discrimination’ written all over it for those who choose to see it. Charles Moritz, a bachelor, hired a nurse to help him care for his ageing mother so he could continue to work. He was denied a tax deduction for the care because Section 214 of the IRS Code limited the tax deduction to “a woman, a widower or divorcée, or a husband whose wife is incapacitated or institutionalized”. Moritz appeals and has confidence in Ruth, despite her inexperience in the court room.

What better way to prepare the male dominated court system for the beginning of a long series of sex discrimination cases than with one which involves reverse discrimination against a male? While this is the only case that Ruth and Marty worked on together and is not even mentioned in the documentary, it forms the focal point of the second half of this film with an acceptable bit of consolidation involved. If RBG is a superhero, this is her origins film.

Ruth’s dealings with Mel Wulf (Justin Theroux) of the American Civil Liberties Union form a necessary subplot, although all the legal wrangling is confusing. But here, too, there are obstacles and minor triumphs.

During the long preparation for the Moritz case, we see Ruth at one of Marty’s work parties, where, rather patronisingly, the partners and their wives congratulate her for ‘inspiring the next generation’ with her teaching. Ruth replies, ‘I wanted to be the one to change the world.’ The foreshadowing is potent. 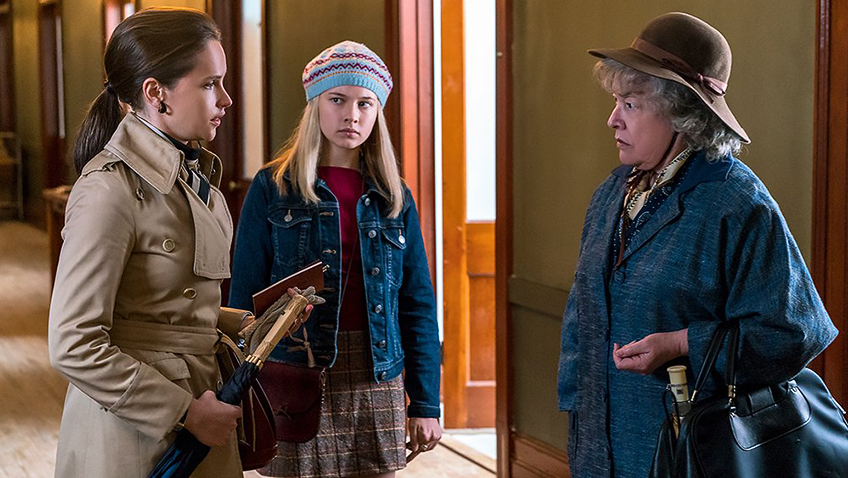 Kathy Bates, Felicity Jones and Cailee Spaeny in On the Basis of Sex

Ruth is, however, already inspiring the next generation. Jane attends a women’s lib rally with Gloria Steinem and mum is not amused to learn that Jane skipped school. It is not easy being RBG’s daughter, continually aware of how brilliant your mother is. Jane believes that you have to change minds before you can change the law while her mother recognises the power of law to change minds and culture. RBG is not one to participate in protest marches, or bring attention to herself, but she begins to admire her daughter – who follows her mother to Harvard and Columbia.

The climax of the film is, as you would expect, the actual court room showdown (much consolidated), and the filmmakers load it with all the tension and nerves that the actual participants would have been feeling at the time.

Smug and confident, The US Attorney General for the Defense, James H Bozarth (Jack Reynor), decides to contend that if section 214 is ruled unconstitutional, it will open the door to challenges to all of America’s gender-based laws and there are hundreds. RBG’s strategy is to tackle each of laws, one by one – this being the first – rather than falling into the trap of this ‘flood gates’ argument. Will it work? 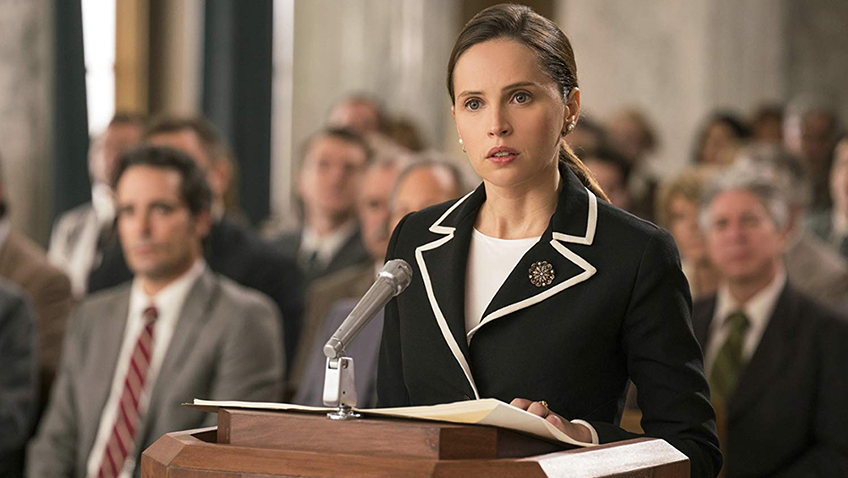 Felicity Jones in On the Basis of Sex

Dean Griswold appears frequently in the film as the establishment enemy. This is unfair as, in addition to expanding the curriculum to include labour and family law, it was he who hired Harvard’s Law School’s first female professor and he who convinced the University to allow the enrolment of female students in 1948 – 22 years before Harvard College admitted females at undergraduate level.

Playing the humorous, extroverted, easy-going and supportive husband, Hammer is fine, but has little to do. A bit as in real life, he stands back and lets his shy, unassuming introverted and brilliant wife stand in the limelight. Jones, a bundle of controlled resolve and determination, is very good but looks-wise, Anna Kendrick, in a certain light, is a dead ringer for the young RBG and might have imbued her character with more depth.

For Mimi Leder, directing a feature film about the triumph of Ruth Bader Ginsburg – the only person standing in the way of the Supreme Court overturning Wade vs. Roe – has a personal side. On the Basis of Sex is Leder’s first film in eighteen years to have a cinema release and she is now 67.