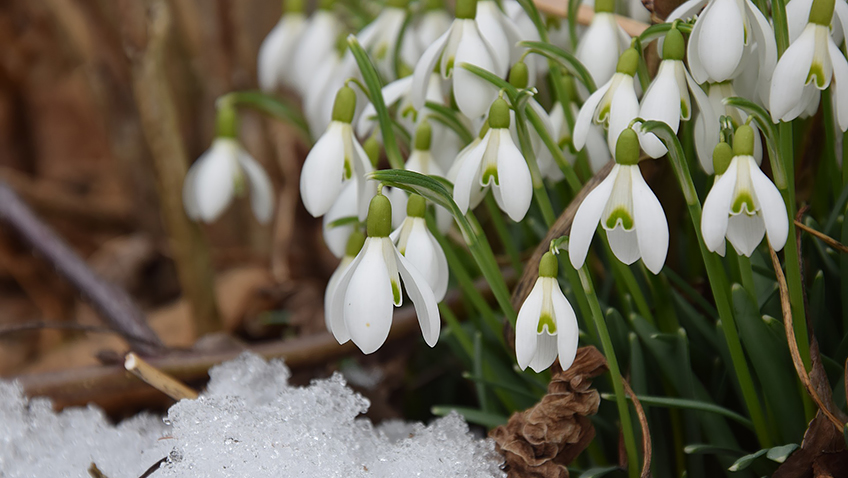 Their scientific name is Galanthus but we know them much better as the simple snowdrop and they are one of the first flowers of the year to come into bloom.

Their name comes from the Greek gala and anthos – gala meaning “milk” and anthos which means “flower” which explains why they are sometimes also called the “milk flower”. You may also see them referred to as “February fairmaids” or “Candlemas bells” whilst one variant is called the “Green Man” which can often be used to represent the cycle of rebirth that traditionally happens with the appearance of each new spring.

And whilst they are often seen to symbolise purity and hope, folklore also states that bringing a single one of these white flowers inside will bring ill-fortune, hence another name for them which is the “death flower”. Ancient folklore says that a single flower may just cause your milk to sour and eggs to spoil – not quite as drastic as the “death flower” but nevertheless not all that pleasant either.

They are a popular garden plant, often planted in dense clumps in and around the edges of woodland, gardens and other shady areas. For many they represent the first sign that spring is on its way – something I think we all look forward to especially if we have had a harsh winter.

But they are a hardy species having often to thrive in harsh weather conditions. So much so that their leaves have enforced tips which ensure that they can successfully grow through snow if the weather is really bad. Rather surprisingly, they also have a sweet and pleasant odour when in full flower – why not try smelling a few this year you will be pleasantly surprised.

The Victorians, in particular, used to collect these little bulbs with a passion, collectors of snowdrops are also known as galanthophiles and high prices can be paid for single bulbs of the rarer varieties. And there are plenty for eager collectors to go for – whilst there are only 20 known species of the plant there were believed to be nearer two thousand different varieties.

Back in 2012, a single bulb of the variety “Green Tear” was sold for some £360 but this figure was surpassed in 2015 when a single bulb of the variety “Woronowii Elizabeth Harrison” fetched £725 after a frenzied auction with over 30 separate bidders taking part. But wait a minute, the record has since gone even higher when a bulb known as “Golden Fleece” was reportedly sold for £1,390 on e-bay.

But did you know that they also have a medicinal benefit and are known to be used in the treatment of Alzheimer’s disease. They contain a chemical called galanthamine that when isolated from the bulb is used to help improve sleep as well as stimulate certain receptors within the brain.

Their popularity has now spawned an ever increasing industry and many gardens that have a large snowdrop population hold regular events and tours to allow people to admire them in their natural settings.

Not surprisingly, the National Trust has a lot of snowdrop displays that you can go and visit, in fact too many to mention. But if you want to find out what is on near you then go and visit www.nationaltrust.org.uk/features/places-to-see-snowdrops. Alternatively, members of The National Garden Scheme that have large displays also open their gardens for visitors. More information can be found at www.ngs.org.uk/find-a-garden/snowdrop-gardens.

As a splash of colour early in the year snowdrops really are worth getting out to see so why not make it a mission of yours this year?