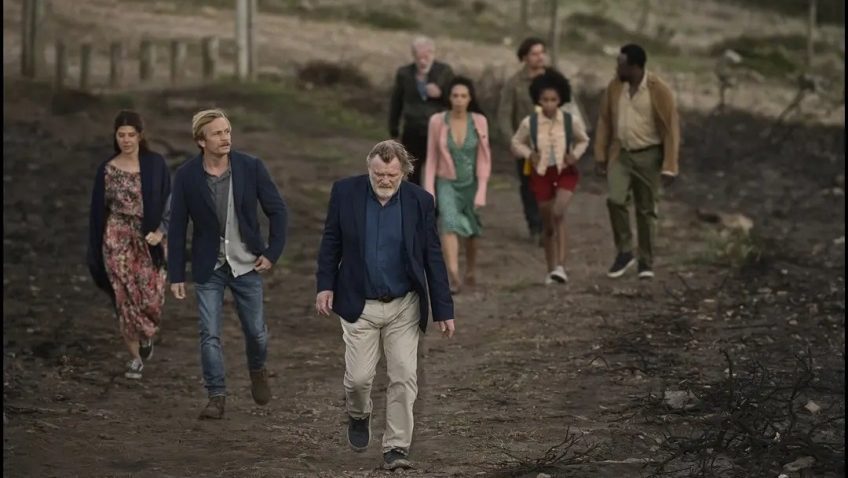 The wonderful Ira Sachs ventures out of Manhattan to Portugal with mixed results.

This is not what you expect from director Ira Sachs (writing with his regular co-writer Mauricio Zacharias). When a director branches out, experiments and surprises us, it is usually a good thing, and here Sachs branches out – to Portugal no less, even throwing in a starry cast led by one of the world’s greatest actresses, Isabelle Huppert. Somewhere along the way, though, he forgot to make us care about all his troubled characters.

Since 2012, Sachs has given us three wonderful films: Keep the Lights Out, Love is Strange and, most recently, Little Men. What they have in common is fantastic dialogue, wonderfully three-dimensional characters whom you care about, and modest casts, that always include some unknown actors. The stories feature creative, gay men and sensitive, artistic boys living in New York City whose lives are negatively intertwined with property or what the American’s call Real Estate.

Although many of the characters’ woes do concern property in Frankie, somehow Sachs knew, in this pre-Covid film, that in the spring of 2021 we would be needing a holiday film set in the historic city of Sintra on the Portuguese Riviera.

Françoise Crémont (Huppert), known to family and friends as Frankie, is a self-absorbed matriarch to a dysfunctional family and famous actress, who has invited her family and a close friend (portrayed by a Euro-pudding of generally known actors) for a reunion. We soon realise that the reunion is to be the setting for Frankie’s grand finale, an announcement that does not turn out the way she would have directed it.

Ensconced, not in a Gothic mansion, but around the David Hockney-like pool of a luxury hotel, the eponymous actress (Huppert), has an early topless dip in anticipation of the arrival of hotel guests – and of the family and close friends she has invited to the holiday resort.

This is the set up for an Agatha Christie caper where a family gather to hear a last will and testament, but here, there is no murder. Instead, there is a lot of painful family acrimony and revelations about the usual stuff: unhappy relationships, marriage and money.

That the plot is simple to the point of negligible is just as well as you spend most of the film trying to figure out who is related to whom in the myriad little sub-plots. The easiest relationship to grasp, on a factual level, is that Jimmy (Brendon Gleeson) is Frankie’s over-dressed, polite, devoted second husband. There is no chemistry between the two, (Huppert is so frail, Gleeson could crush her), but love works in mysterious ways.

After dragging his heavy-set body up a steep flight of steps, Jimmy takes a drink from a late 18th century fountain in the hilly, picturesque town. Looking down on the fountain is Frankie’s first husband, Michel (Pascal Greggory), in conversation with a handsome tour guide, Tiago (Carloto Cotta). Tiago is explaining that in bygone years, young girls in search of a husband would come to the town to drink from the fountain, although he does not have statistics on the success rate. Later in the film, Tiago confesses that he does not know why he stays married. He loves his wife, but she is like the police, always watching him jealously. Even the tour guide is not exempt form romantic problems in this film.

Perhaps film hair-stylist Ilene (Marisa Tomei), a rare friend of Frankie from the film industry, should have a drink at the fountain. The man she has taken the liberty of inviting to the reunion, Gary (Greg Kinnear), is an ambitious camera man for George Lucas, who feels stuck in his job and wants to change gears. He is boring Ilene with his plans for them to move in together outside of the city after he sells his flat in Manhattan, freeing up cash to fix up her Manhattan flat. You can tell this relationship is not going to last.

Meanwhile, Frankie is hoping to fix up Ilene with her wayward, morose son Paul (Dardenne Brothers’ regular, Jérémie Renier). Paul works (not terribly successfully one gathers) in finance and, in what sounds like a sequel in the making, plans to move to New York, where Ilene already lives. There are two obstacles to Frankie’s plan. Ilene has brought Gary with her, and Paul tells his mother he thinks he is still in love with Anne-Sophie a girlfriend from two years earlier. Jimmy shakes his head at Frankie’s plan: “you think you can manipulate everything, don’t you?”

In the most tedious sub-plot, Frankie’s stepdaughter, Sylvia (Vinette Robinson), who is more sullen than her half-brother, is constantly irritated by Ian (Arivon Bakare), her husband of 20 years and father of their self-righteous teenage daughter, Maya (Sennia Nanua). In Maya’s first appearance, she looks on with disapproval as Frankie swims topless and warns her grandmother to put a top on before the hotel guests arrive. Maya knows that her mother is not telling Ian that she wants a divorce until she has secured a home, and she betrays Sylvia by telling her father.

When, after Paul throws away a ring Frankie gives him to avoid inheritance tax, Frankie faints, and the truth about her health is revealed. At this junction, all of these strands (and a dark family secret) are supposed to coalesce, but never do.

A cross between the gothic who-dun-it, Knives Out and an Eric Rohmer’s holiday film about relationships, such as La Collectionneuse, Frankie is neither as fun, funny and lively as the former nor as insightful and mesmeric as the latter.

The holiday motif, and the talkie-relationship themes are reminiscent of Rohmer, and the casting of Pascal Greggory in the cameo role of Frankie’s first husband, is no coincidence. Greggory played the handsome, blond, tanned wind-surfing instructor hopelessly in love with the gorgeous Marion in Rohmer’s Pauline at the Beach. And if that link fails to convince you, Sachs has Maya wander down to the beach where she experiences her own romantic encounter with a young local, just as 15-year-old Pauline does in Pauline at the Beach.

Once you mind starts wandering to Knives Out or Rohmer’s holiday romances, the comparisons do not do Frankie any favours.

You can read our review of Rohmer’s Pauline at the Beach here.

You can read our review of Knives Out here.