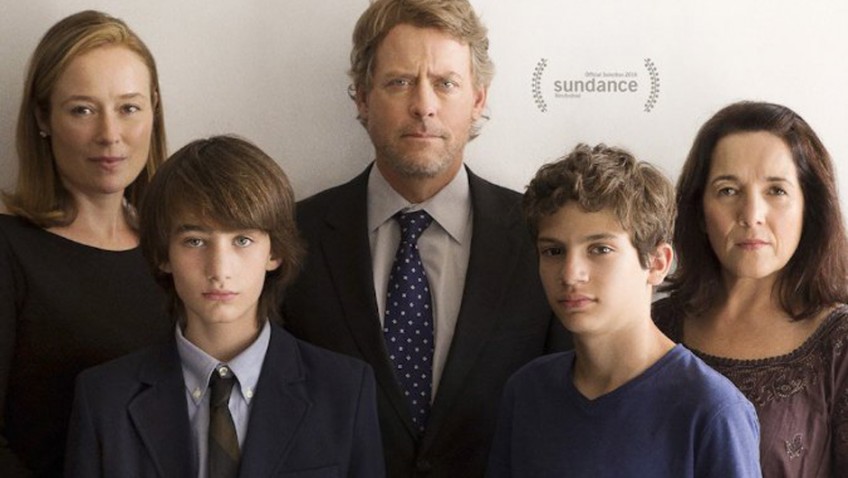 In his 2014 film, Love is Strange, director/co-writer Ira Sachs told the moving story of Ben and George, a newly-married, same-sex couple, aged about 70 and 60, who are forced to live apart after 39 years when the Catholic School where George works as a music teacher learns of the marriage and sacks him. Unable to pay the rent on their beloved apartment, the two men separate to live with friends while trying to find affordable accommodation.   In Little Men New York real estate is again at the root of the dilemma that separates two 13-year-old friends – introvert Jake (Theo Taplitz), and extrovert Tony (Michael Barbieri) – through no fault of their own.  Though Sachs loads the dispute with a race and class dimension, he does not take sides, leaving us shifting positions long after this truly moving and thought-provoking film ends. Actor Greg Kinnear excels at injecting a life and a third dimension into characters that otherwise might be simply functional and lacklustre.  Here he plays Brian Jardine a mild-mannered, middle class family man who thinks he has a bit of good fortunate when he inherits a mortgage-free apartment in Brooklyn along with the rental from a shop below.   Brian, a struggling actor; his wife Kathy (Jennifer Ehle), a therapist and he family breadwinner, and their son move from their apartment in Manhattan to Brooklyn.   Brian and Kathy are thrilled when their loner son Jake befriends Tony, the son of the shop tenant who was close to Brian’s late father.

The moral dilemma at the heart of the film occurs when the Jardines discover that their tenant, Leonor Calvelli (Paulina Garcia), a single-mother whose dress shop barely breaks even, pays substantially below the market rate for the prime real estate space.  With Ben now unemployed and his sister Audrey (Talia Balsam) insistent on maximising her share of the inheritance, both Kathy (who ends up buying a dress from the shop) and Brian (sensitive to those who, like himself, are struggling to stay afloat) take turns in trying to negotiate with Leonor.  In a series of emotional pleas, Leonor tells them that she helped Brian’s late father when no one else did, and in return he promised her low rent, although this is not reflected in the lease.

While these arguments are going on, Jake and Tony continue to bond. Jake, who draws all the time, wants to be an artist and Tony, who is a natural, wants to be an actor. They have dinner and spend the night at one another’s home; roller skate through the city together; discuss their future plans to attend Fiorello H LaGuardia High School that specialises in the creative arts, and explore the city together.   With Tony, Jake, who shows no interest in girls, even goes to a rave in Manhattan, where he sits on the sidelines while Tony flirts with, and is rejected by, a pretty girl he likes.

In one funny scene, when the boys are angry with their parents’ unfair treatment, they conspire to give them the silent treatment, and sustain it admirably well given their frustrating dependency on adults.

While Sachs is clearly interested in the parents’ inability to resolve this tricky dilemma, his focus is on the children, and how the dispute between the parents, the equivalent of a physical divorce, affects the boys.

Paulina Garcia is terrific as Leonor. She is not afraid to show a woman whose own helplessness prompts her to use emotional blackmail and a stubborn defiance that might make viewers less sympathetic to her plight, rather than more. The Chilean-Spanish actress might be remembered for her superb performance as the eponymous heroine of 2013’s older-women’s-lib film, Gloria, and it’s great to see her back on the screen.

The real stars of the film, however, are the adolescent actors, and in particular the animated, ebullient Michael Barbieri who, like his character Tony, is surely going to find his vocation in acting.

While Little Men is a separate, independent film from Love is Strange, it is no coincidence that both films, written by Sachs with Mauricio Zacharias, explore the unintended consequences of a property dispute on two sets of male protagonists: an older, vulnerable pair and a young, impressionable duo.  Nor is it a coincidence that the two men in Love is Strange are also both creative types, one a painter, and the other a music teacher.  In this case, Leonor, who makes and designs dresses and Brian an actor, who derives no pleasure from the eviction, are also creative types. This is not fortuitous as Sachs seems to be contrasting the artistic mentality with the cut-throat world of New York real estate, showing the vulnerable on both sides to be the victims, regardless of age.

While property disputes and the pains of losing a best friend are serious matters, Sachs injects a lovely low-key humour into the film, and some astute irony. The perfectly judged ending will touch a cord with every adult who remembers the helplessness of being a child in a senseless adult world.  A master of brevity, Little Men says more in 85 minutes than many films manage in 2 hours, and every minute is a treat.