Home / NEWS / Grandad is struck by a freak bolt of lightning 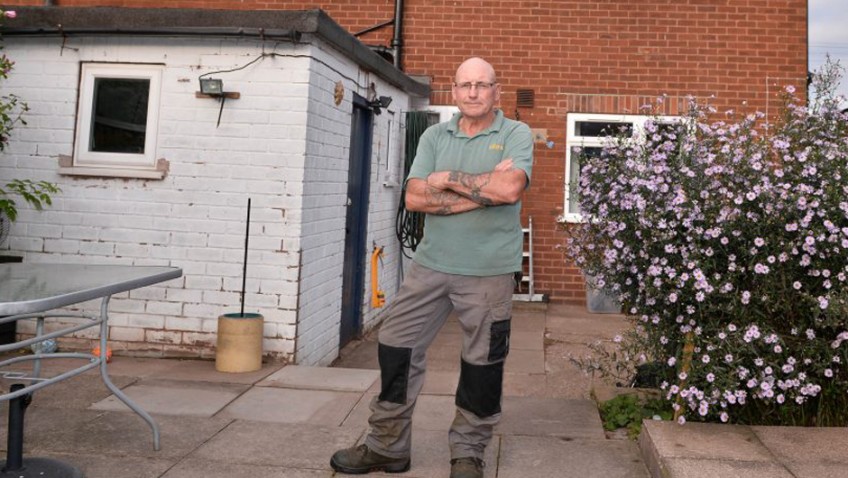 Grandad is struck by a freak bolt of lightning

A grandad had a miracle escape when he was hit by a freak bolt of lightning as he was preparing his mower and hurled 10ft (3m) across his garden.

Norman Semple, 61, was trying to take the machine inside after he was caught out in a terrifying thunderstorm at 7pm on Tuesday (13/9).

But just before he reached the door he heard an “almighty crack” before a “great white light” shot towards him and threw him into his porch in Lichfield, Staffs.

The granddad of three wore rubber gloves for two days and had a constant “tingling” through his body, but astonishingly didn’t need any medical treatment.

Norman’s wife Sally-Ann, a 39-year-old events photographer, was taking pictures of the ferocious weather moments before the strike.

Her photos show a huge bolt of lightning that struck their neighbour’s house, destroying its chimney.

“I had been repairing a lawnmower in my backyard when a really fierce storm started.

“Sally-Ann had been out taking pictures moments before, and I was taking the mower inside to get out of the wet.

“I was getting close to the house when suddenly there was this almighty crack and I saw this great white light.

“It was like this great streak of white light came flying across the lawn towards me.

“It knocked me clean off my feet, picked me up and hurled me 10-feet through the air and into the porch.

“The only way I can describe it is it was like something from a science fiction film.

“Afterwards I had this tingling all through my body, like pins and needles everywhere.

“If I touched anything metal I’d get a static shock, so I had to wear rubber gloves for two days.

“I had a really nasty headache too, but that went after a couple of days and now I’m fine other than the odd tingle.”

Sally-Ann and Norman’s two televisions, Virgin Media TiVo box and Wi-Fi router were blown up in the storm, and they believe their aerial attracted the blast.

Sally-Ann said: “As a photographer I like to take pictures of thunderstorms, but we don’t really get them in the Midlands that much.

“After this strike though I don’t think I want anymore – it was a bit too close.

“I only took a few pictures on my phone and then went back in because it was so fierce. Then I heard this massive crackle and the electricity in the house blew.

“Norman’s fine, luckily, I think he’s just been attracting all the static ever since. He can’t open the washing machine or touch anything metal.”