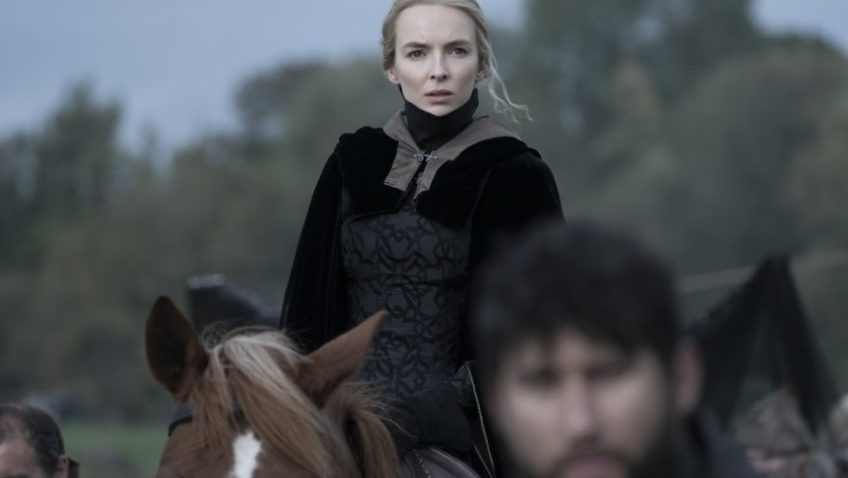 At 83 Ridley Scott is still pushing boundaries, but this thrilling true story needs more of a woman’s point of view.

Whether tackling the future (The Martian, Alien, Blade Runner) the past (Gladiator) or giving a feminine twist to the American road movie genre (Thelma and Louise) Ridley Scott’s famous “cinematic eye” fixes on big, bold, thrilling, action themes and subjects that demand big sets, atmospheric locations, a big screen and big actors to fill it. Using multiple cameras and 35 and 65mm film instead of CGI, Scott; his regular cinematographer Dariusz Wolki (age 65), and regular production designer Arthur Max (age 75), send us time travelling back to medieval France when a woman’s word is only proven by a male duel to the death.

While at 83 Scott continues pushing boundaries, The Last Duel, set in late 14th century France during the 100 Years War, echoes his celebrated 1977 debut feature The Duellists, set in the Napoleonic Wars. Both films are about two battle-hardened men who carry a feud of honour and reputation to a nail-biting end. In adapting Eric Jager’s non-fictional book The Last Duel: A True Story of Crime, Scandal and Trial by Combat in Medieval France, however, the warriors are trumped by a woman who takes centre stage, although not as quickly or as prominently as we would like.

Co-written (with the witty, empathetic Nicole Holofcener) by two of the film’s stars – Ben Affleck and Matt Damon – the film also echoes this pair’s famous script-writing and acting debut in Good Will Hunting nearly a quarter of a century ago.

Squire and soon to be Knight, Jean de Carrouges, lives with his controlling, heartless mother (Harriet Walter) in a rugged castle and is due to inherent his late father’s land. The righteous, illiterate squire is not one for creature comforts and has no interest in appearances. He is away most of the time fighting for the King, Charles VI (Alex Lawther), and a battle scar on his face is a badge of honour. Carrouges is the personification of PTSD, joyless, impulsive, angry and emotionally repressed. He might be an honourable nobleman, but he is a hopeless diplomat.

In one battle early on in the Hundred Years War, Carrouges saves the life of an old friend, Jacques Le Gris (Adam Driver) a sometime solider, dashing with his black goatee and long hair flowing over his flamboyant capes. Le Gris is a bit of a rogue who puts on the charm and flaunts his education for the ladies while currying favour with the ruler of Normandy, and the King’s cousin, Count Pierre D’Alençon (Affleck).

At this time, Carrouges, desperate for an heir, marries Marguerite (Killing Eve star Jodie Comer), Sir Robert’s (Nathaniel Parker) beautiful daughter in a marriage of convenience, frowned upon by Carrouges’ status conscious mother. But Carrouges has his eye on a valuable piece of land in the corner of Sir Robert’s estate and, very reluctantly, Sir Robert agrees to include it in the dowry.

The tenuous friendship between Carrouges and Le Gris is ended suddenly when Le Gris confiscates that valuable piece of land as repayment for Sir Robert’s debt. And is awarded Carrouges’ own land by Count Pierre. Carrouges, as impulsive in civilian life as in battle, and as confident in the King’s justice and fairness, attacks Le Gris as he dines with Count Pierre and is sent off mocked by all present.

Carrouges keeps his bride overly protected in the castle but treats her to a night out when they attend the celebration of a fellow squire’s first child. Carrouges makes a show of patching things up with Le Gris and sends Marguerite forward to greet Le with a formal kiss. Later, Marguerite jokes with a lady friend that Le Gris is handsome, unaware that he has fallen in lust with her.

One day shortly thereafter, when Carrouges is away fighting his mother inexplicably neglects her promise to remain in the castle with her daughter-in-law and rides into town accompanied by the staff. As if he is aware that Marguerite would be alone, Le Gris chooses that day to pay a visit to the castle.

If recreating medieval France on location in historic French castles and mounting thrilling battles (staged by Wonder Woman stunt coordinator Robert Inch) is not challenging enough, the story of what happens next is told three times from the point of view of each of the three main protagonists. This corresponds to a trial that ensues when Marguerite courageously confides in her husband that she has been raped, and he nobly agrees to defend her honour to the death.

This is a clever and complex device, but it does not really work. While it would be silly to have three completely different points of view, the differences that we watch are very subtle, particularly as the audience is in little doubt that Marguerite did not encourage the delusional Le Gris’s advances. It is clear to us he believes that all women desire him, even if they are faithfully married and scream no.

What does work is the suspenseful last section of the film in which Marguerite, who will die a horrific death by fire if her husband loses the jousting match, is bound like a criminal, guilty until proven innocent by her husband’s strength in battle.

As Marguerite learns from her scathing mother-in-law, most women, if wronged, shut up about it. The chances of their spouses believing them are slim and it is certain that if the wife survives her husband’s anger, the incident will bring shame on the family name. But what makes Marguerite’s bold stand even more precarious is that, after five years of marriage, she shows up at the trial heavily pregnant – several months after the rape.

This is a thrilling true story, but we are no longer in the 1380s. The second half of The Last Duel should have been turned over to Nicole Holofcener and Jodie Comer so we could experience this dark age for women in a new light.