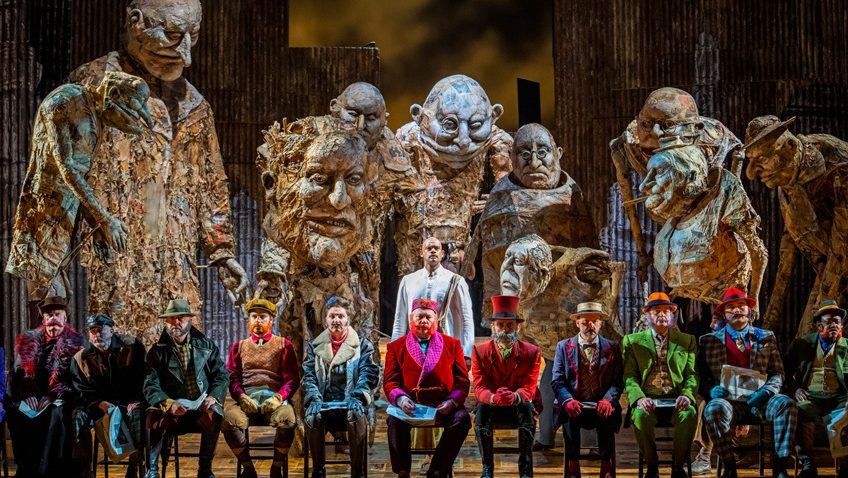 It’s great to be back at the London Coliseum after an 18-month closure, watching opera again by English National Opera.

Philip Glass’s minimalist opera, a sacred piece, an epic meditation, a spiritual pageant, is based on Gandhi’s philosophy of non-violent resistance. Satyagraha, a word coined by Gandhi, means “holding on to truth.”

Glass produces an amazing sound: mystical, serene, mesmerising in its extended repetition, soothingly beautiful, a hypnotic and unstoppable aural tapestry. There is no plot. Satyagraha is not a biography like the Richard Attenborough/Ben Kingsley film. Satyagraha is a spiritual journey.

The libretto is Constance De Jong’s adaptation from the text of the Bhagavada, a meditation on how to prepare spiritually for combat. The Sanskrit is fiendishly difficult to learn and sing.

Phelim McDermott‘s brilliantly theatrical production in slow motion is much enhanced by set-designer and co-director Julian Crouch’s giant puppets of mythical warriors, senile old people, bird, fish, crocodile and gods. One of the most memorable images is a massive ball of screwed-up newspapers becoming animated and having a raging turmoil life of its own.

The last act, which feels as if it will never end, is particularly challenging. But Sean Panikkar’s Gandhi, impressively sung, is a calming presence. The orchestra, conducted by Carolyn Kuan, is terrific. So, too, are the singers and the chorus. Satyagraha is an extraordinary work. Vocally and visually, it is an unforgettable experience.