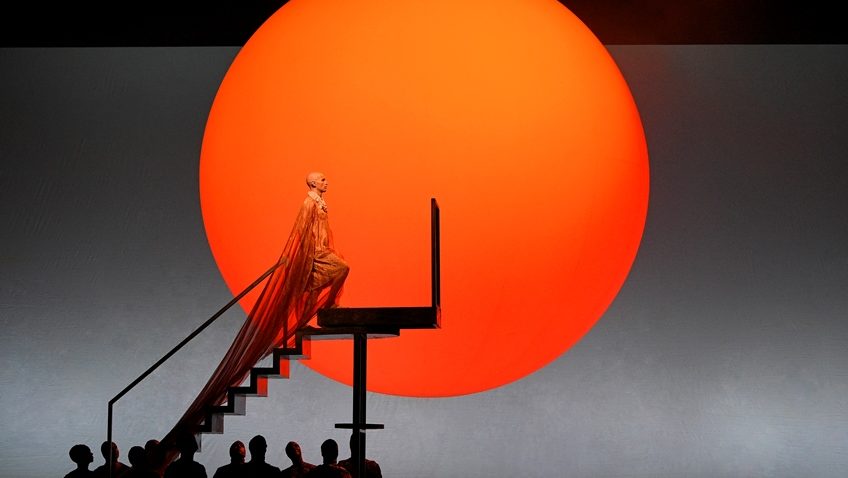 The Metropolitan Opera House New York nightly streams operas for free, which is a great treat. I recently caught up with two of American composer Philip Glass’s minimalist opera portraits. Glass, one of the most influential musicians of the 21st century, describes himself as “a composer of music with repetitive structure.” He is addictive. The sound is mesmerising.

The opera had its American premiere at The Met in 2019. Phelim McDermott’s production, conducted by Karen Kamensek, had already been seen in London in 2016.

Akhnaten, father to Tutankhamun, ruled Egypt around BCE1351-1334. Nearly a thousand years before the Christian Era, he renounced the multiple gods and introduced a monotheistic worship of the Sun. There is no story-line as such, nor characterisation. The texts are drawn from ancient hymns, prayers, letters and inscription sung in their original Egyptian.

The opera is a series of extraordinary and richly costumed religious rituals/tableaux – funeral, coronation, marriage – acted out in spellbinding ultra-slow motion. The opening chord (which seemed as if it might go on forever) is mesmerising. The drama, chorally, comes in the third act in the brutal confrontation with the high priests of The Temple of Amun who rouse a mob to kill Akhnaten. Absolutely thrilling.

Counter tenor Anthony Roth Costanzo, shaven-headed, no body hair, is hypnotic as Akhnaten, vocally and physically. A major contribution to the production’s success is the Gandini Juggling Company who juggle in synchronised unison and never drop their balls.

The opera is a sacred piece, a contemplation, a spiritual pageant, based on Mahatma Gandhi’s early years in South Africa and his philosophy of non-violent resistance. Satyagraha, a word coined by Gandhi, means “holding on to truth.”

Glass produces an extraordinary sound, soothingly beautiful and enthralling in its seemingly unstoppable repetitions. The libretto is an adaptation from the text of the Bhagavada, a meditation on how to prepare spiritually for combat, and fiendishly difficult to learn and sing.

Phelim McDermott‘s brilliant production, conducted by Dante Anzolini, was seen at The Met in 2011. Richard Croft is Gandhi. As the opera progresses Croft becomes more and more like Gandhi, an amazing transformation.

The production is much enhanced by set-designer and co-director Julian Crouch’s giant puppets of mythical warriors, senile old people, bird, fish, crocodile and gods. One of the most memorable images is a massive ball of screwed-up newspapers becoming animated and having a raging turmoil life of its own. The last act feels as if it will never end.

Nightly you can see a different Met opera for free. You can also gain access to operas in The Met’s archive with a Met Opera on Demand subscription or rental. You can find out more by visiting their website. To do so follow this link.