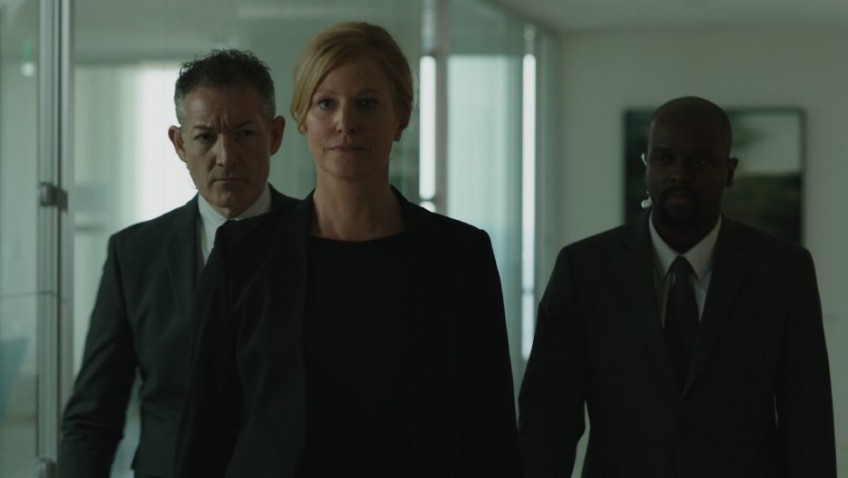 Powerful women on Wall Street: an admirable, if flawed, attempt to redress the imbalance

Since the financial crisis, there has been a raft of fictional films taking us inside the cut-throat world of investment banking and foreclosure. We’ve had The Big Short, The Wolf of Wall Street, 99 Homes, Arbitrage, Margin Call and of course, Wall Street: Money Never Sleeps, among others. What all of these films have in common is that they are directed by men — about men.

Women appear as trophy wives or sex objects purchased by the men’s obscene wealth. Indian-American director Meera Menon’s (Farah Goes Bang) sophomore film, Equity might be late out of the starting gate, but no less eager for that to give women their due in the high stakes world of investment banking.

While the filmmakers’ ambition is to be applauded, the story tries so hard to cover all the bases that it ends up resembling an episode of Game of Thrones set on Wall Street.

The novelty of a female director, writer (Amy Fox) and co-producers spills over into the acting category where the three protagonists are women: as ruthless and devious as their male counterparts, but more vulnerable. These women at the top have to try harder than their male counterparts, but cannot count on their sisters for support. Despite their accomplishments, they still have to contend with sexism, but they believe it’s fair game to use their sex to get ahead.

The focus of the story is brilliant investment banker Naomi Bishop (Anna Gunn from Breaking Bad) who admits to liking money and specialises in taking risky social media start-up companies public. She lets her boss know that she is expecting to be promoted to the ‘global head’ vacancy when everyone is whispering about Dynacore, the hot IPO that got away. Moreover, her boss tells her, ‘there is a perception that you rubbed people the wrong way.’ Naomi is secretly beating herself up over passing on what turned out to be a profitable public float, but she doesn’t let it show. In the top 22 top financial firms on Wall Street, only 17% of senior executives are female and Naomi is one of them. Now she wants more, although there has never been a female CEO in any of them. Naomi appears nonplussed: she has thick skin and, more importantly, she has a new IPO in her sights that will eclipse Dynacore.

Naomi has won over Cachet’s immature, young CEO by suggesting a sound, but enticing share strategy. They will attract investors to the party by opening with shares at £32-34. When ‘everyone is having a good time’ and queues form, demand will increase and with it, the share price.

Reaching the launch date is, however, like navigating one’s way through an inhospitable labyrinth of a sexist organisation, undermining and back stabbing colleagues, a devious prosecutor, an untrustworthy lover and a whimsical, demanding and egocentric client. These hurtles play out like an encyclopaedia of everything that an ambitious woman faces when she plays with the big boys in high finance.

When her super-efficient associate, Erin (co-producer Sarah Megan Thomas) brings up her own promotion, reminding her she has been ‘undercompensated for two years now’. Naomi rebuffs her request, telling her it’s been a bad year. She promises to put in a word’ for Erin, however, and she does. As it happens, however, it will be too little too late. Erin has been hiding her career-threatening pregnancy, which is pretty difficult as she is so thin. Naomi‘s business calls for good character judgment and instinct which, as we see, fails her when it really counts. On this occasion, however she confronts her associate about her condition. Erin fears that Naomi could use that knowledge to stall the promotion until it’s too late.

The growing competitiveness between the two reaches a peak when Erin’s people skills saves Naomi from losing the trust of the young, arrogant (and frankly, so despicably full of himself that you struggle to believe him) CEO of Cachet.

While Naomi is feeling increasingly uncomfortable about Erin, she bumps into an old school colleague, Samantha Ryan, (co-producer Alysia Reiner). Sam, as she is called to underline the man’s job she is doing, used to work in narcotics, and now works for the DA’s White Collar Crime office. Sam is investigating the alleged insider trading of dodgy hedge fund manager, Benji Akers (Craig Bierko) who might be planning to sabotage the float to make a windfall betting on a lower opening price.

The D.A.’s office suspect that he is getting his information from Michael Connor (James Purefoy) and this makes Naomi a suspect as well. Michael is not only Naomi’s lover, but works for the same firm as she does, their respective departments separated by a Chinese Wall. When Naomi proves too principled for Michael and too smart to be fooled by Sam’s delicate probing, both have to seek the information they are after from other, less ethical sources…

There is no doubt but that Amy Fox’s script is well researched. It describes very real situations in its depiction of a woman’s journey to the top of a Wall Street firm and the issues surrounding the IP0 are accurate. Even the deceptive Erin, who is so eager to cement her place with Cachet’s CEO that she drinks and flirts with him although pregnant, is shocked when he makes a pass. To her, ‘I thought you invited me here to discuss business’ he snaps, ‘If I want to discuss business I’ll call Naomi!’

This desire to leave no stone unturned, however, leads to a script that feels somewhat contrived and that suffers from a deficit of good dialogue. The flat look of the film and pedestrian direction might be a clever way of distinguishing Equity from the glossy, slick Wall Street films we are accustomed to with men turning a serious situation into an occasion for humour.

In contrast to the intentionally comic style of films like The Big Short, Equity is, like 99 Homes, deadly serious. But 99 Homes gave us nail- biting tension while centering the action on a great moral dilemma and three-dimensional characters that we really care about, even after the film is over. For all its admirable ambition and qualities, the same cannot be said of Equity.