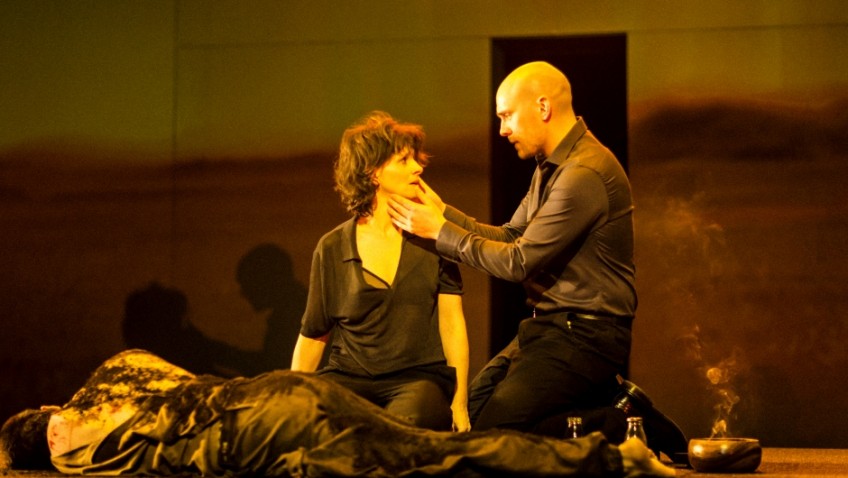 Sophocles’ great tragedy, first performed circa 441 BC, is a clash between two extremes. Neither King Kreon nor Antigone will back down and the effects are disastrous for themselves and their immediate family.

Kreon gives sound reasons why the traitor Polynices should not be given a decent burial and decrees that anybody attempting to do so will be executed.

Antigone, who is Polynices sister and Kreon’s niece, disobeys him. She puts piety and respect for the dead above the authority of the State.

The production begins most promisingly; but, disappointingly, it never develops into the thrilling dramatic experience I was hoping it would be. Rather, the reverse.

Kreon (Patrick O’Kane), inflexible and rigid, is incapable of compromise and, as the Chorus points out, “to persist in error is imprudent, unlucky” (and then, in a deliberate and cheapening way, adds) “and just stupid.”

Antigone is described as having “a kind of absolute exclusive self-regarding rage.” Juliette Binoche, not yet totally in command of the role, is too screechy and not always distinct.

The guard, who has to tell Kreon the bad news that the body has been buried, is acted with a nice sense of humour by Obi Abii.

All the characters take turns to be members of the Chorus; even Antigone. She returns from the dead to take on the role of the Messenger who reports how Kreon’s wife and son died.

I think the next time somebody wants to do a modern take on this great play, it would be a good moment to revive Jean Anouilh’s Antigone, which premiered in Paris during the Occupation in World War 2 and has not had a major revival in Britain in 70 years