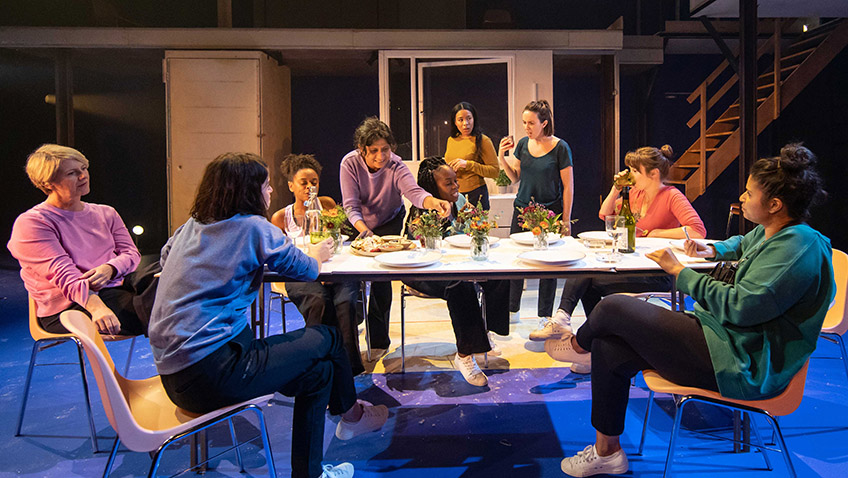 Alice Birch’s play explores the impact of the criminal justice system on women and their families in 100 tiny scenes which have such titles as Arms, Cry, Night, Scar, Waiting, Queue, Carrier Bags, Blossom and Salt.

The play was co-commissioned by National Theatre Connections and the theatre company Clean Break, which has been making work with and about women who have had experience of the criminal justice system these last 40 years. 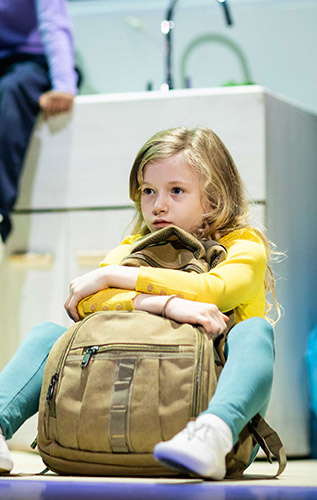 Some of these scenes are written for adults, some for children. Some are fragments, others more like short plays. They can be performed in any order. It’s up to the director.

Maria Aberg has chosen 27 of these scenes and engaged a talented all-female cast of 12 adults and two children for her production, which also fields an all-female creative team. There’s not a man in sight.

A daughter climbs through the kitchen window to rob her mother’s purse. Another daughter refuses to be reconciled with her mother.

An appallingly gauche social worker proves to be more anxious than the older woman she is meant to be caring for.

Two children in care draw a dividing line in their small bedroom over which neither must trespass.

A woman pleads for shelter; but the care-house is full. A woman prisoner threatens to electrocute herself.

Another woman murders her two children because she thinks they will be better off dead than growing up and living in the 21st century.

[BLANK] is very fragmentary. I was reminded of a play by Caryl Churchill called Love and Information at the Royal Court Theatre in 2012, which had 16 actors playing over 100 people in 57 scenes in 110 minutes. Churchill’s scenes were even shorter.

Some of Birch’s traumatic scenes inevitably work better than others.

The most enjoyable scene in this production is the longest, a middle class dinner party, which is brilliantly stage-managed by Maria Aberg with everybody talking over everybody else. A working-class guest, who deliberately pretends to have never heard of the #MeToo Movement just to goad them, finally puts these smug, complacent cocaine-snorting women firmly and unsubtly in their place.