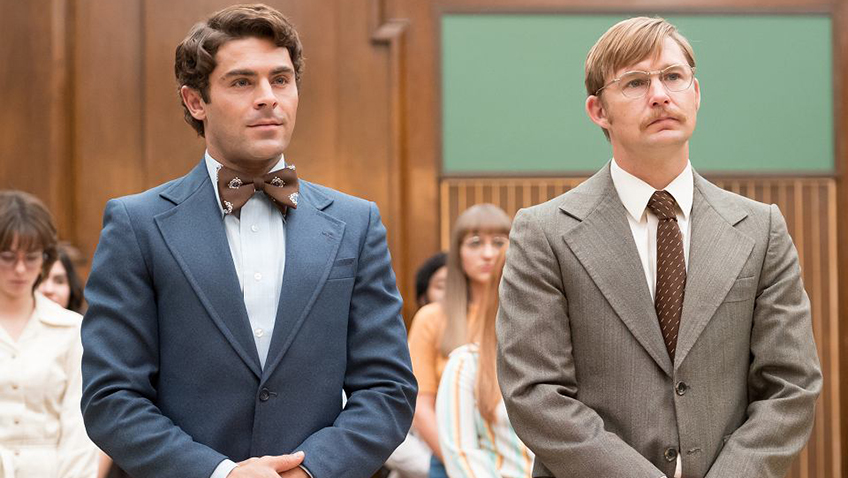 Extremely Wicked, Shockingly Evil and Vile (Sky). These are the words of the judge at the trial of Tom Bundy, the notorious American serial killer who murdered 30 young women whom he had abducted, raped and mutilated. He was executed in 1987. There are horrendous descriptions of gruesome deaths, but director Joe Berlinger is able to make the film very watchable by keeping the murders off screen and having Zac Efron play Bundy for the charismatic charmer his long-time girl friend (Lily Collins) loved. The trial, the first to be ever televised, is recreated. Bundy takes over his own defence and turns the murder case into a charade. John Malkovich as the judge is an admirable foil to Efron’s grandstanding.

Dolemite is My Name (Netflix). Dolomite is the name of the character the vulgar X-rated singer and comedian Rudy May Moore created. The obscene jokes he rapped out went down well with his cabaret audience. He released albums with nude images on the sleeves and they sold extremely well. In 1975 Moore decided to make a movie in a derelict hotel with friends, students and prostitutes. The movie, amateurish and technically appalling, was hilariously bad and got terrible reviews; but it was hugely popular with black audiences. Eddie Murphy gives a flamboyant performance in the title role.

Ordinary Love (Focus Features). A retired married couple have to cope with breast cancer, surgery and chemo. They go through it together and the stress on them both is enormous. They already have had one tragedy. Their daughter died young. The acting of Liam Neeson and Lesley Manville (who puts on a brave and frightened smile) is faultless. Lisa Barry D’Sa and Glenn Leyburn direct this tender and poignant film, which well suited to be watched on television. However, many may find it too painful and too distressing to watch.

A Hidden Life (Fox Searchlight) is a true story, an act of courage and sacrifice during World War 2. Franz Jagerstatter, (August Diehl) an Austrian peasant farmer and conscientious objector, refuses to swear the oath of loyalty to Hitler. He is ostracised by the citizens in his hamlet. The army imprisons and executes him. Despite the efforts of a sympathetic judge (Bruno Ganz) at his tribunal, he refuses to compromise, preferring to die. Terrence Malick’s tribute alternates images of the beautiful Austrian countryside and farming and familiar newsreel footage of Hitler and the Nazis. The film, slow and heavy-going, lasts three hours.

Bait (BFI) is a remarkable achievement on practically no budget at all. It feels like a silent film with what little dialogue there is added after. Shot on a vintage 16mm camera using monochrome Kodak stock, director Mark Jenkin tells of the confrontation a burly fisherman (Edward Rowe) has with the tourists who have invaded the Harbour village where he lives and ruined it forever. Jenkins relies on images rather than acting. (Everybody is trying so hard not to act.) The film is chiefly notable for the editing and the way extra shots, others would throw away, are constantly inserted.

Cosh Boy (BFI). Juvenile delinquency in post-war Britain. The film got an X certificate in 1953. Today it feels very tame 16-year-old criminal (James Kenney) beats up old ladies and gets underage girls pregnant. Lewis Gilbert’s film, poorly scripted, cheaply made and badly acted, blames parents for their lack of control and not providing early discipline. Gilbert advocates that what the boy really needs is a good thrashing from his father. The police totally agree. Kenny, repeating his stage performance acts everybody off the screen, including Joan Collins as the ditched girl friend. Hermione Gingold has a cameo appearance as an elderly prostitute.