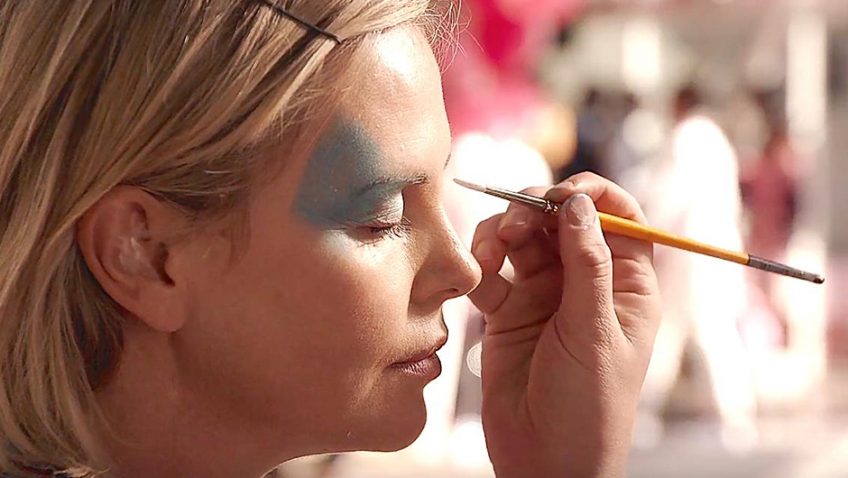 When the Duchess of Cambridge emerged from hospital on 24th April, hours after having given birth to her third child, she looked picture perfect in a bright red dress. The media was quick to reassure the rest of the population that it’s ok to go home in wrinkled pyjamas with circles under your eyes. Despite her royal stamp, Catherine is not a super mum; she just has help.

That is what Marlo’s (Charlize Theron) brother, Craig (Mark Duplass) is trying to tell his sister, who is about to give birth to her third – unplanned – child. Drew (Ron Livingstone), Marlo’s husband, has recently had a promotion, but with it comes a heavier workload and more travel. Their home is a tip, and Marlo – four stone overweight, and too tired to care about appearances – is struggling with her hyperactive (possibly autistic) son Jonah (Asher Miles Fallica) without neglecting his old sister, Sarah (Lia Frankland) who wears thick rimmed glasses. Jonah euphemistically labelled ‘quirky’ by school principal Laurie (Gameela Wright).

When Marlo has dinner at Craig’s immaculate home, the tension between Craig and Drew is palpable. Craig’s tiger-mum wife Elyse (Elaine Tan), mum to two (the ecological, sustainable number of offspring) tries in vain to relate to Marlo. ‘The ninth month is difficult; I remember I could barely make it to the gym.’

Craig ushers Marlo into his Tahitian bar off the living room and tells her that what she needs is a night nanny. Elyse had one for their two kids and he is paying. The couple’s pride and their financial situation, further strained when Marlo left her job for the new baby, prompt Marlo to reject the offer.

Returning to Jonah’s school, now with her infant daughter screaming in her arms, Marlo responds to this latest summons with uncharacteristically fierce candour. Laurie had told Marlo that Jonah would benefit from a one-on-one aide, but the school would not pay for it. Marlo’s resentful at the school is tinged with guilt that the new baby has made it all the more difficult to give Jonah what he needs.

Now the school officials feel it is ‘in Jonah’s best interest’ to find another school. Marlo confronts Laurie with the fact that Jonah has only lasted this long because of Craig’s financial donations. ‘I don’t want you to leave like this,’ Laurie entreats the hysterical parent. ‘I leave like this every time,’ Marlo explodes. Every f***ing time. You just don’t see it.’ This is not the last time that the conceit of not seeing and seeing what we want to see hovers over the film like a metaphorical drone.

Following Marlo’s outburst at the school, she concedes that help is needed, but the details are hazy. Watching a pornographical reality TV school in her pyjamas in the downstairs living room one night while Drew is upstairs sleeping, Marlo is disturbed by a knock on the door. 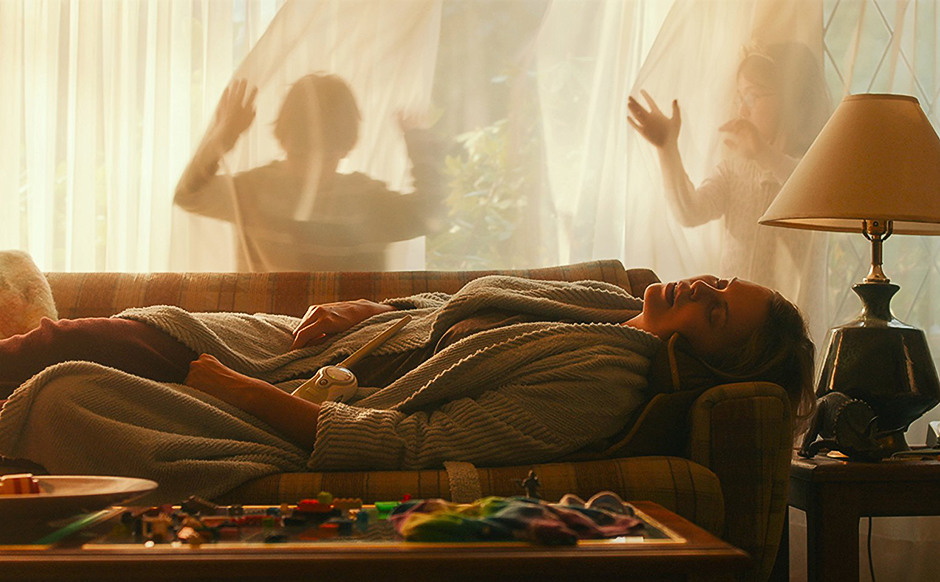 Suddenly, like an apparition, or like the arrival of Mary Poppins, an attractive, super-fit, ever-cheerful young woman introduces herself as Tully (MacKenzie Davis), the night nanny. Marlo seems confused, but Tully is a pro at making people feel at ease. Still, Marlo naturally finds it awkward sharing her intimate and very physical life with a stranger and the audience is by now feeling uncomfortable, too. The idea is that starting, now, Marlo will go to sleep, and Tully will stay with the baby, bringing her up only for the feeding and then taking her away so that Marlo can sleep. In the morning, neither Marlo nor Drew has any recollection of the interruption, but Marlo can’t help but notice how refreshed she feels.

As the routine develops, Marlo finds that for the first time in years, she has someone she can talk to – not only about her feelings of failure as a mother, but about the career she never really had after graduating with an English degree, and the happy memories of when she was thin, carefree, 26-year-old with a ground of friends – like Tully. Now 40, she is a housewife and mother who cannot even summon the strength to make cupcakes for the school or clean up her house. 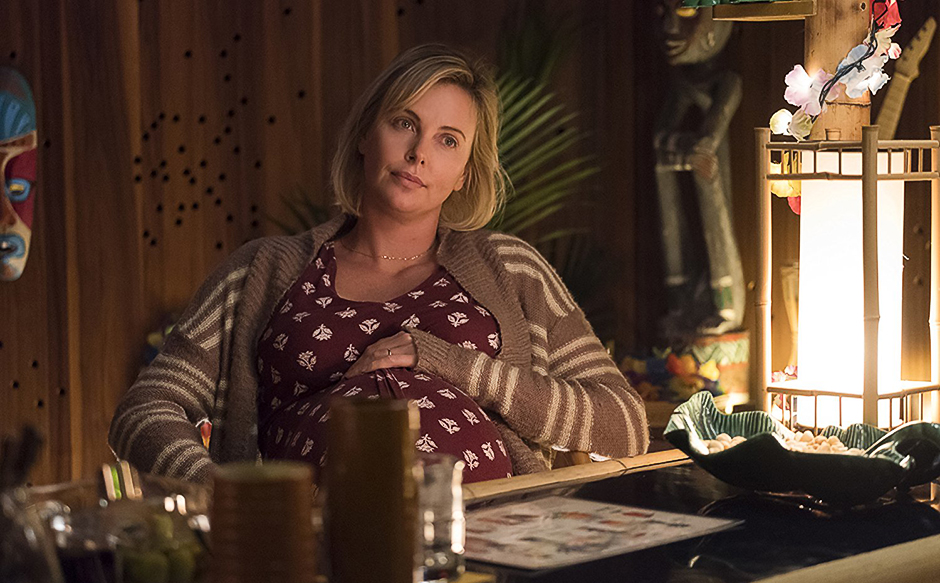 But the morning after these reflections, beautiful cupcakes appear on the table and Sarah, noticing the change in the entire downstairs, wonders, ‘why’s the house so clean?’ When Marlo reminds Tully that all this is beyond her brief, Tully smiles, ‘oh that’s ok. I’m like Saudi Arabia, I have an energy surplus.’

The only energy on display in the bedroom is Drew’s enthusiasm for video games on the bedroom TV with headphones conveniently shouting out any baby noise. Can Tully’s magic wand work its magic in this neglected part of her client’s life?

Screenwriter/producer Diablo Cody’s two best films (Juno and Young Adult) have been directed by Jason Reitman, and Young Adult, starred Charlize Theron. This winning trio has once again worked its magic with a subject that is rarely exposed so honestly. Gone are the romanticised depictions of birth, glowing motherhood and yummy mummies taking over the local bakery and gyms. As Cody recalls her own experience giving birth to a third child three years ago it is without rose tinted lenses.

But none of it would have worked without the courageous performance and physical transformation from Theron (who won an Oscar for transforming into serial killer Aileen Wuornos in Monster). Much is made of Christian Bale’s losing 121 pounds for The Machinist, Matthew McConaughey shedding 47 for Dallas Buyers Club Robert De Niro gain 60 pounds for Raging Bull, but for a 42-year-old actress last seen as the glamorous, stylish, eponymous assassin in Atomic Blonde to gain four stone is far riskier career move.

Toward the end of the film, when Tully, after a painful break-up, decides that booth women need a girls’ night on the town, the narrative fumbles. But the clever aftermath provides the biggest clue to the film’s essential twist. Tully

is so engrossing that you might not have noticed what was really going on. Few really do notice yet one more oversized mother’s messy, hard slog.