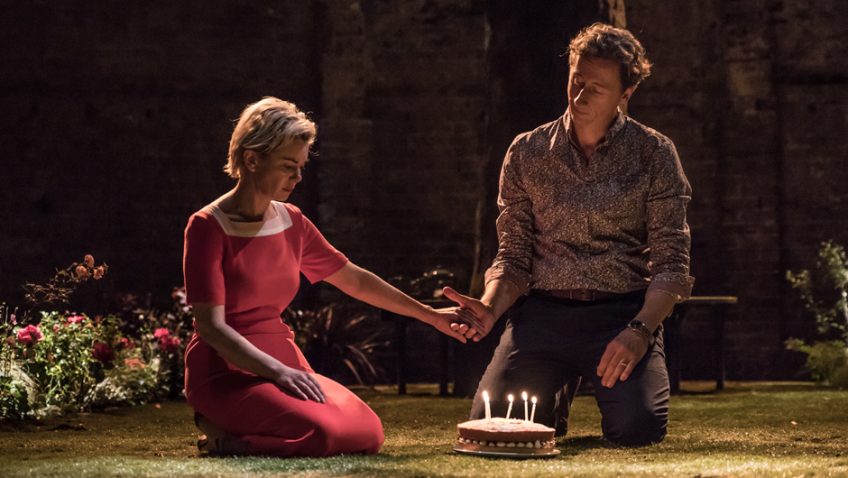 The last time playwright Mike Bartlett and director Rupert Goold worked together was on the highly successful King Charles III. There is plenty to enjoy in his new, complex and emotional play which is extremely well acted and well directed and owes much to Chekhov.

Albion is a garden attached to an old house in Oxfordshire.

The auditorium and stage has been completely refigured so that audience feels they are in the garden with the actors.

The garden, created in 1923 was a memorial to the men who died in World War 1 and has been left in wrack and ruin.

The very word “Albion” conjures up an idealised England which existed a very long time ago; if it ever existed at all. It is not real to want to live in the past.

The production opens to music by Elgar and what could be more British than that?

Audrey (Victoria Hamilton), a former businesswoman in her mid-fifties, has moved out of London to live in the country. She has bought Albion and her mission is to restore the garden to its former glory and for it to be a memorial to her son who died in Iraq, killed by a road bomb.

The garden is transformed between scenes before our very eyes when the whole cast turn gardeners and plant flowers right round the horseshoe-shaped stage. Audrey is married to man (Nicholas Rowe) who has no purpose in life other than to love her and do her bidding. Her brusque manner alienates everybody else, daughter, best friend, son’s fiancée, servants, villagers.

When Audrey talks about Albion it is in much the same terms that Ranyevskaya talks about her beloved cherry orchard.

Audrey has no empathy. The long-serving retainers (Christopher Fairbank and Margot Leicester), no longer in good health, get a raw deal.

Audrey deeply offends her son’s fiancée (Vinette Robinson) when she decides what to do with his ashes without consulting her. The fiancée’s reaction is graphically choreographed.

Audrey best friend (Helen Schlesinger) is a lesbian and a famous novelist who has written a satire on all the people who voted for Brexit.

Audrey, not surprisingly, is very angry when the novelist, who had once been in love with her, falls in love with her 22-year-old daughter (Charlotte Hope), a would-be writer, who is loved by a 19-year-old window-cleaner (Luke Thallon) who also wants to be a writer and go to university.

Albion is another big success for Bartlett, Goold and the Almeida.