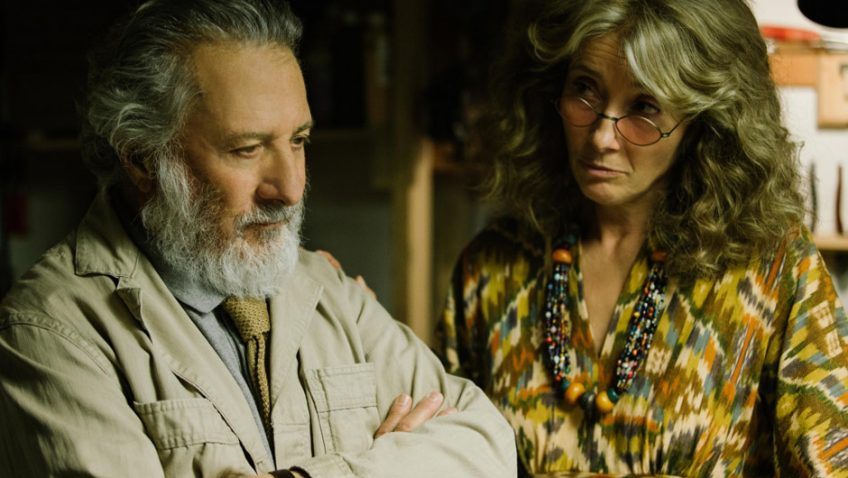 You can tell something about Noah Baumbach’s new bittersweet comedy, The Meyerowitz Stories (New and Selected) from the quirky title. Still it’s difficult to tell a book with Dustin Hoffman, Adam Sandler, Ben Stiller and Emma Thompson by its cover. If not entirely successful, the film is a thought-provoking exploration of the relativity of failure as three dysfunctional siblings grapple in the shadows of their cantankerous father, an artist of some repute. This is the first Baumbach film however, that can also be described as tedious – unless you have a thing for somebody else’s family arguments.

The big star of the film is bearded patriarch Harold (Dustin Hoffman). Emma Thompson, however, might not be a good match for Hoffman. On British soil, in the touching Last Chance Harvey, their romance coincides with Harvey’s sudden heart attack. Here, she is Harold’s fourth (again much younger) bohemian, NYC wife, who care for him in her manner after a blow to the head sends him to hospital. As a rule of thumb, any A-list actor over 65 who is cast in a family drama doubles as a plot point, as he or she is bound to end up dead or in hospital to change the family dynamic. Harold might be a terrible father, but his hospitalization is the focal point for a family reconciliation. Harold’s three, middle-aged children, each carrying around the scars of their father’s upbringing, unite at his hospital bed.

Harold, as the first half of the film establishes, is a minor sculptor who is just waiting for his moment to be recognised as one of the misunderstood geniuses of the 20th century New York art scene. If it was all about Harold, the famous artist, when the children were growing up, it is still all about Harold as his three children help assemble a retrospective of his art – and an ego-boost – in a group show.

In a lovely series of scenes, beautifully acted by Sandler and Van Patten, we feel the non-judgmental bond between father and daughter, so absent between Danny and Harold. Eliza is aware of her father’s failures, but values their close relationship, manifested when they sing songs at the piano or talk about nothing and everything on the front steps. Back upstairs, Harold feels no guilt whatsoever about his son’s low self-esteem and inability to shed the baggage of his difficult childhood.

We have high hopes when Harold and Danny set out to spend quality time together at a swanky show for Harold’s old friend and contemporary artist, L.J. Shapiro (Judd Hirsch). There is an awkward moment when Harold, who finds he is not on the VIP guest list (and is, with Danny overdressed in a tux) wants to leave. He changes his mind when LJ introduces him to Sigourney Weaver an introduction he brags about. as though they became friends. But just as Danny begins to enjoy himself, rekindling a relationship with LJ’s friendly, intelligent daughter (Rebecca Miller), his father drags him home, ruining the evening.

Also around the hospital bedside is Matthew (Stiller), Harold’s son by his third wife, Julia (Candice Bergen). In a short, but powerfully acted scene she, at least, acknowledges her failure as a stepmother to Danny and Jean, who are, regrettably, not present to hear her apology. Harold seems so oblivious to his failings as a father that Julia’s apology does not register. Though it is clear that Matthew is Harold’s favourite son, Matthew is the child who put the distance between himself and his father both geographically and career-wise. Matthew, a financial expert and the successful CEO of a company in California, has just opened a branch in New York where some of his clients are in fact artists and celebrities.

But the reunion between the estranged favourite Matthew and Harold goes no better than Danny’s. When Matthew invites his father to lunch at an expensive restaurant, the two talk over one another, in a non-conversation as annoying for us as it is for Matthew. Harold seems unaware that he is not responding to anything Matthew says, replying instead with non- sequiturs to draw the conversation to himself. Harold eventually humiliates both men when he leaves the restaurant before the meal, accusing a fellow-diner of theft. Harold’s behaviour here looks a lot like dementia, but Baumbach seems to suggest it is just Harold being difficult.

Jean (Elizabeth Marvel) is the least successfully drawn character and when she tells her brothers, ‘You guys will never understand what it’s like to be me in the family,’ she is also talking to the audience. We never really do understand and have little reason to care. We can, however, imagine she had even less encouragement from her insecure, self-absorbed father than did her male siblings. A semi-coherent monologue late in the film seems like an after-thought to round out her character.

At the hospital, in one of the funniest scenes in the film, the siblings go on a crash course in navigating your way in a hospital as a patient’s next of kin. They set aside their differences to find common ground when it looks like Harold will not survive. The grief counseling session sounds hollow as they are advised to say five essential phrases: ‘I love you’, ‘I forgive you’, ‘forgive me’, ‘thank you,’ and ‘goodbye’.

Adam Sandler impresses in this serious, underdog role, but it will not surprise anyone who saw him in Punchdrunk Love or Funny People where his dramatic skills proved superior to his recent comic efforts. Baumbach is also a good director for Stiller, who in both Greenberg and While We’re Young, shaped Stiller’s comic flair and balances it here with humanity and empathy.

If While We’re Young is a more satisfying and enjoyable film it is because Hoffman is so convincing as the overbearing bombastic, obdurate patriarch, that it’s hard spending time with him. We are left to hope that the only way for this family to go is up, but we are not sure there is enough energy left after all the resentment and cruelty to make them buoyant.