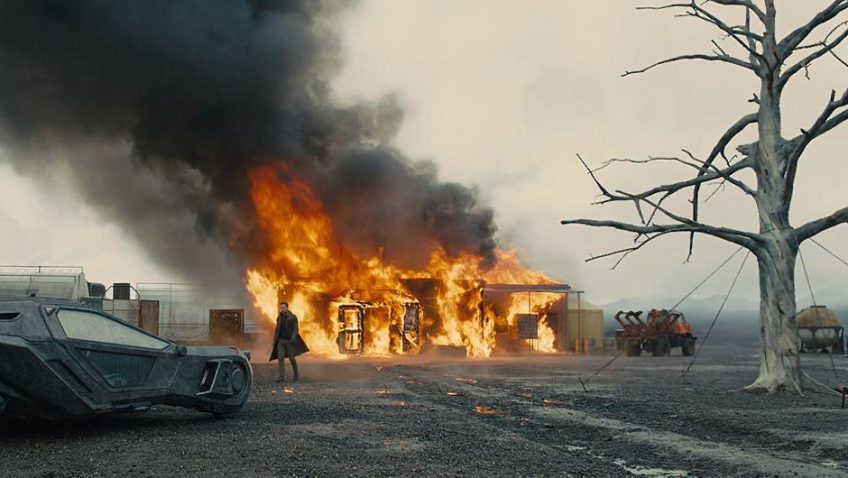 It used to be that Sci-Fi blockbuster films were the preserve of young audiences, but on the evidence of Denis Villeneuve’s Blade Runner 2049

alone, that is no longer the case. Only those audiences who are now over 50 could have seen the original 1982 film, the third feature directed by Sir Ridley Scott. Now 79 and a ‘Sir’, he is the sequel’s Executive Producer in Post Production. Harrison Ford, 75, reprises the role of Deckard. A key supporting role from the brilliant Robin Wright (51) and a cameo from Edward James Olmos (70), the inventor of ‘City Speak’ in the original, lend more than gravitas to the story. Also returning with a story and top writer credit is Hampton Fancher, now 79. Composer Hans Zimmer is 60.The great Roger Deakins, (who was DoP on Villeveuve’s films Sicario and Prisoners), is 68, and as well as overseeing the complex and superb lighting, he operates the A camera in this visually remarkable and inventive neo-noir, dystopian Sci-Fi.

For all that, in one respect this is not an age-friendly film. Older audiences might struggle to hear the dialogue with the low, gravelly voices, the echo chamber effect (when a character called Luv speaks) and the mumbling. Movies have never been equal opportunity employers, of course, but it must be said that this one becomes fun, humane and alive when the charismatic Harrison Ford – looking every bit the Blade Runner in his grey t-shirt – makes an entrance: albeit 120 minutes into the 163-minute film. 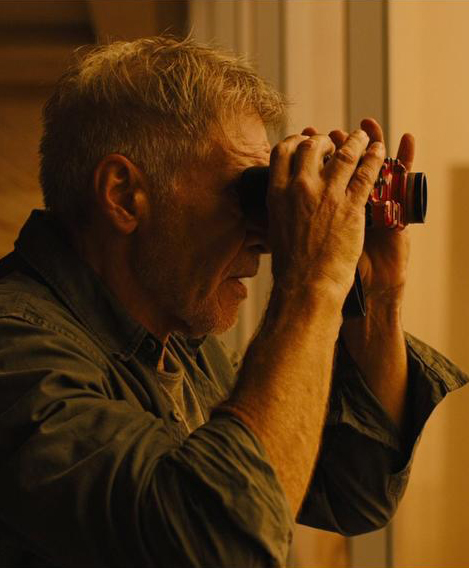 is a visual tour de force, departing from the original rainy, muddy, dark aesthetic judiciously to put modern technology at the service of the story. This is just as well as Philip Dick, on whose story the original film is loosely based, thought the original special effects ‘captured my own interior world. They caught it perfectly.’ Dennis Gassner’s production design conveys the heartless, overcrowded and inhuman city festering under a sky of dirty smog. It still has the ring of Fritz Lang’s Metropolis, but what Sci-Fi movie set in an overbuilt urban environment doesn’t?

One question left unresolved from the original Blade Runner was whether Deckard was a Replicant (Fancher and Scott disagreed on the point, and Scott needed to churn out a few versions to work it out). A Replicant, by the way, is a bioengineered slave with a short life span and put to use in space, with older models being illegal on earth. Replicants are detected using polygraph-like machines (and many cross- referenced questions to overcome learnt responses) that human empathy. The irony cannot be missed in the sequel. Replicants not only dream of being human, but they seem to express more empathy than do most of the humans. And this is one of the film’s main themes.

The film is set in 2049, 30 years after the Blade Runner (a cop who tracks and eliminates Replicants) Deckard (Ford) disappeared with a pretty Replicant named Rachel (Sean Young). Since then The Tyrell Corporation, which engineered the Replicants has gone bust and a long haired, hollow-eyed, weasel-like sadist named Niander Wallace (Jared Leto) has taken over the business, aiming to perfect its Replicants by enabling them to reproduce. Wallace’s assistant is the film’s impeccably dressed villainess, Luv (a chilling Sylvia Hoeks).

There seems little doubt but that Ryan Gosling’s (La La Land, Drive) Blade Runner, Officer KD6-3.7 is a new model Replicant – but one that secretly hopes he is human. If the serial number does not give it away, the requirement that K check in for continual ‘baseline’ comparison mental tests might. Moreover his live-in pleasure companion, Joi (Ana de Armas) is a bright, accommodating hologram whom, it must be said, he treats without much empathy. 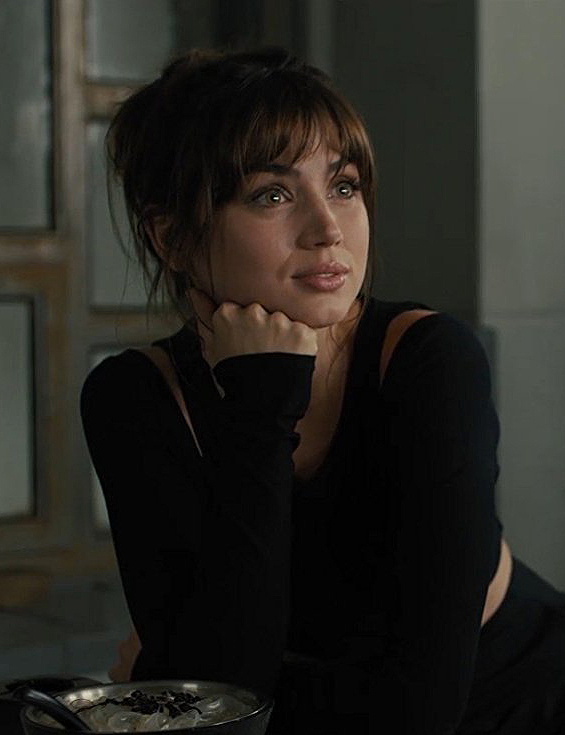 Villeneuve summons up the essential atmosphere of paranoia as the all-powerful LAPD Replicant team, under Lieutenant Joshi (Robin Wright), leaves no stone unturned. She is sympathetic to and even protective of the hard-working K, but keeps him on a short lead. When he discovers a disturbing secret while on a routine elimination job, Joshi orders the evidence be destroyed, correctly fearing a Replicant revolt if the truth be known. Though he’s a model cop, K cannot quite follow Joshi’s orders. There is something bothering K about the nature of his memories and about the farm where he eliminates a burly protein farmer (Dave Bautista) in a battle of superhuman strength that somehow K wins.

Gosling is a terrific actor (one only has to watch Half Nelson, his breakthrough film to see it), but despite beefing up after La La Land, he does not look the part of a Blade Runner. Maybe Villeneuve is more interested in conveying impenetrable existential angst (as in Gosling’s performances in Drive and Only God Forgives). In any event, on a path of no return, he follows a trail that ultimately leads to Deckard. Along the way pay attention to the carved horse (that replaces the origami unicorn in the original) and a rather forgettable memory maker (Carla Juri) protected from contamination in a glass room. 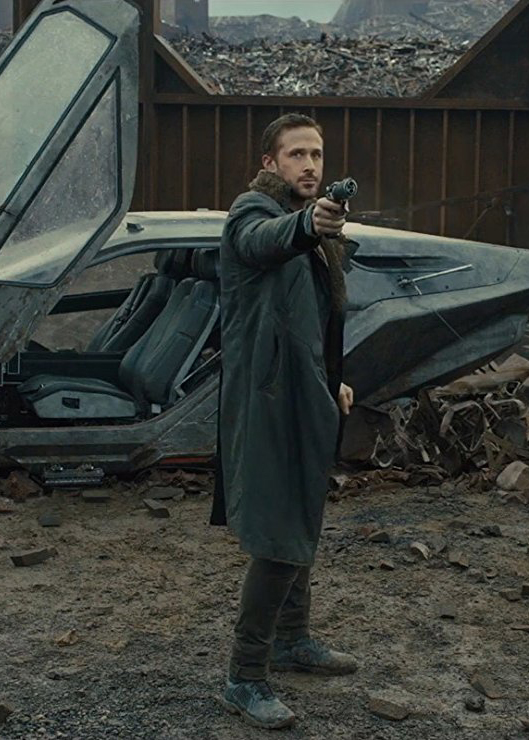 Villeneuve has the confidence to let the investigation develop slowly and organically like a Raymond Chandler mystery (the setting is after all, L.A), but the approach backfires as the pacing become monotonous. He does have the vision and social conscience to retain Hampton Fancher’s emphasis on the destruction of the environment: San Diego, the artificially green, middle class suburb of Los Angeles is now one huge and sprawling waste dump.

The script has enough depth and ideas to delight Sci-Fi fans, but since almost every Sci-Fi movie since 1982 has used some aspect of the original Blade Runner, these ideas and motifs feel, ironically, rehashed and familiar. Ridley Scott himself has pitted android against humans again in this year’s Alien: Covenant. The recent re-issue of 1991’s The Terminator 2 explores the Human vs. Android issue with a winning combination of action, suspense, humour and heart – all of which are in short supply with Blade Runner 2049

We certainly do not miss that old film noir staple, the voice over from the original what we do miss, before Ford’s entry at least, is a humanising element that ran through this year’s excellent superhero film, Logan (co-written by this film’s co-writer Michael Green). If Androids long to be human, audiences long for a bit of wit and soul to off-set the nihilism and all of the CGI.