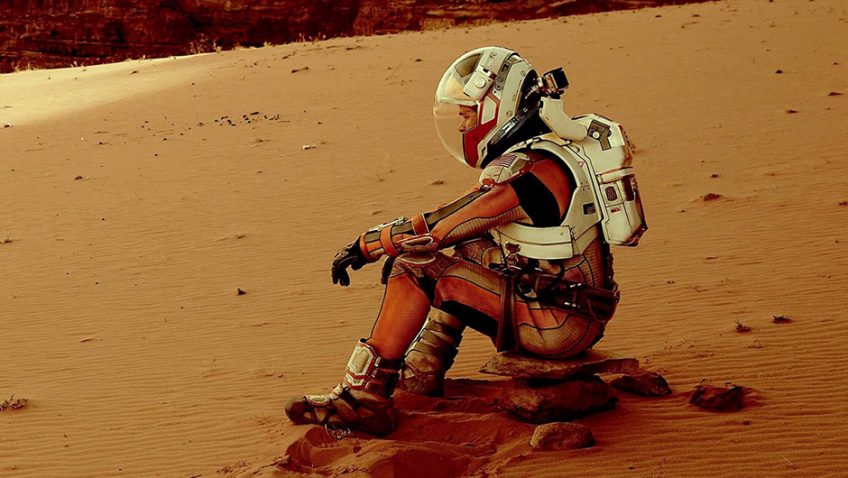 Ridley Scott is 77, and the British director behind such mega-hits as Alien, Blade Runner, Thelma & Louise and Gladiator is not only still making big- budget blockbusters, but is not living on his laurels.  With the planet Mars in the headlines for the discovery of water, so Scott’s not-so Sci-Fi comedy/drama/thriller The Martian

, starring Matt Damon, is in our cinemas.

During a violent storm, the crew of a manned mission to Mars is forced to flee in their space ship minus astronaut Mark Watney (Damon) who has gone missing, and is assumed dead. Captain Melissa Lewis (Jessica Chastain) tries to search for Watney, but realises that to delay departure would risk the lives of the rest of the crew.

The sad news is announced to the world. As the crew continue on their long descent to earth, however, they do not realise that Watney, a mechanical engineer and botanist, has not only survived his injuries, but is using ingenious methods to communicate with NASA.

then becomes a survival saga, like the Life of Pi, All is Lost, Unbroken and Castaway, coupled with a race-against-time movie, like Ridley’s late brother Tony’s film, The Taking of Pelham 1,2,3.  Will the ready-meals on board and the potatoes that Watney has succeeded in growing last until supplies can travel the 34 million miles to reach him?

Meanwhile, Mitch Henderson (Sean Bean) persuades Sanders to inform the crew of Watney’s survival. He was reluctant, fearing it would distract them from their mission.  This communication sets in motion a truly nail-biting rescue mission as the whole world waits helplessly on earth for news. Chiwetel Ejiofor, Benedict Wong and Nick Mohammed in The Martian

Damon played villain Dr Mann, and Chastain played the heroine who saves the world’s population, in Interstellar, Christopher Nolan’s often incomprehensible, gloomy dystopian sci-fi blockbuster of 2014.  But here, Damon is a lot more fun and as he makes the film his own.

Unlike Interstellar and Gravity for that matter, scientists admit that almost everything that occurs in The Martian

, based on the book by Andy Weir

, and adapted by Drew Goddard (The Cabin in the Woods, Cloverfield), is plausible.  NASA scientists served as advisors on the film, hoping that it would revive public (and hence Treasury) interest in space exploration. This was, of course, before today’s news that there is water on Mars.  In the film, which was partly shot in the Wadi Rum desert in Jordan there is no water.

But the plot also depends on creative licence: the storm that leaves Watney behind is impossible as the air pressure on Mars is too thin for winds of any magnitude to have this effect.

Still, that hardly spoils the adventure nor the fun, for Scott retains the humour from Weir’s book, and Damon’s Watney, who makes daily recordings of his activities on Mars for science and posterity, has a mean sense of humour. Matt Damon in The Martian

This recording device is, of course, expository, but it is preferable to Watney talking to himself. There is also a running gag about the disco music that Captain Lewis has left behind, that, and re-runs of Happy Days, being Watney’s only entertainment. Scott goes further, and uses the lyrics or titles of the songs to complement the action in an intentionally unsubtle manner.

Up to a point, more fun is to had from all the ingenuity used by Watney while, up in the space craft and back on earth, a talented ensemble cast (which includes Michael Pena, Kristen Wiig, Kate Mara, and Aksel Hennie) work equally hard to bring him home.

There reaches a point, however, and rather early on, when the science overwhelms the drama and we stop feeling the urgency or the danger.  At the 100 minute point, a touch of weariness sets in as we patiently follow the complex web of activity on earth, in the space ship, and on Mars.

The denouement is the major flaw, however, an anti-climactic disappointment. Scott could have solved both problems by cutting 20 minutes from the film and by planting some ironic doubt in our minds about the return trip home.

Despite these criticisms, The Martian