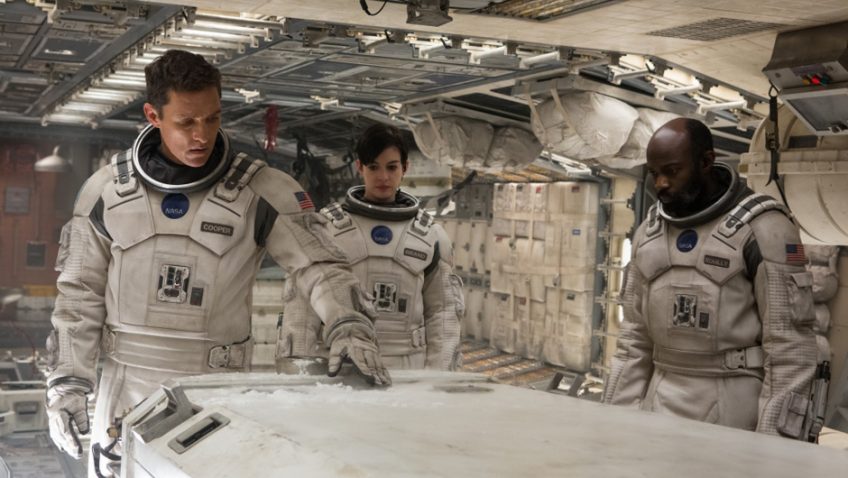 After writing, directing and producing the mega hit The Dark Knight Rises (the conclusion to his lucrative Batman trilogy) and receiving four Academy Awards for the cryptic Inception, Interstellar

, a kind of Inception with a plot, is a logical next step for Christopher Nolan.  And Nolan lucked out when his choice of star, Matthew McConaughey, won an Academy Award for Dallas Buyers Club earlier this year.

Many viewers will have a grand time strapping themselves down with Space Cowboy McConaughey for this mind-bending epic voyage from the cornfields of the dystopian Midwest to Saturn and galaxies beyond. But for the rest of us, Interstellar

is a visually stunning, but soulless and sometimes tedious three hours, all geared to a punch line that some Sci-Fi fans, and astrophysics, in particular will appreciate.

begins, as do most dystopian Sci-Fi films, with the United States facing even bigger problems than it has now.  The earth’s supply of oxygen is diminishing and the only crop that still grows, corn, is being destroyed by dust storms.  Test pilot-turned-corn farmer Cooper (McConaughey) lives in a shabby, sprawling farm house with his precocious, ten-year-old daughter Murphy (Mackenzie Foy), conventional son Tom (Timothée Chalamet) and rock-solid father Donald (John Lithgow).

Murphy believes she is in touch with a kind of ghost from outer space, but she’s a rebel who has been expelled from her backwards school so there’s more to it than that.  One day, when dust settles in her room in a pattern, she and Cooper figure out that the ‘ghost’ is sending them messages carried on gravitational waves through binary coordinates in the dust.  Of course Dad remembers his Morse code.

The message sends them to a secret NASA space station where director Professor Brand (Michael Caine) and his daughter Amelia (Anne Hathaway, looking like Liza Minnelli in Cabaret) seem to be waiting for a test pilot like Cooper to show up.  Brand tells Cooper that he is fairly certain there is a wormhole, presumably created by extraterrestrial beings to facilitate the passage from earth to another habitable planet. Three previous missions have sent astronauts to likely habitable planets. Cooper’s mission is supposed to collect any data gathered to determine if any planet can sustain life.

Given the time differential between the planets they will be exploring and earth, it is doubtful Cooper and his crew of four humans (including Amelia) and two robots will return before Murphy is a grown woman.  Cooper is making a sacrifice but is determined to return to his family alive.  Never mind that Cooper hasn’t flown in years and hasn’t been trained in the new space ship, the Endurance, he must leave immediately.  Murphy is furious at her father and rejects a watch that he leaves with her as a parting gift.  You just know that watch (time – get it?) is important and it proves to be.

The rest of the story consists of the space ship Endurance’s adventures and mishaps, as well as the evolving relationship between Amelia and Cooper. That turns frosty when she is outvoted over which of the three research stations to target. The crew head for Planet Mann, named after the astronaut (a miscast Matt Damon) who is still transmitting signals from there.

Meanwhile, back on earth, a grown-up Murphy (Jessica Chastain) has become a scientist at NASA and is racing to communicate with her father through time and space to save humanity and bring home her dad. Trapped in another dimension, Dad Cooper is trying to get home to Murphy. feels like a cross between Inception (for the cryptic plot), Gravity (for the gravity-free space visuals), M Night Shyamalan’s Signs, (for its blend of American cornfield and spiritual Sci-Fi), and Oblivion (for the dystopian notion that humanity is relocating to Saturn’s moon to escape the destruction of earth).  But Nolan is far too competent and confident a filmmaker to be beholden to others.  Interstellar

is his own exquisitely crafted (best to see it in the Imax theatres or theatres that show 70mm), ambitious and original failure.

There is only one scene, a space tsunami, where the suspense is palpable, as we know what to expect and what can happen.  More often, the characters debate scientific issues and grapple with the dangers in the space-time continuum that leave us passively unmoved. The renowned Physicist, Kip Thorne helped Jonathan Nolan, the Director’s brother, write the script and served as consultant to the Director.  This ensures a clever, and even remotely plausible, plot, but not necessarily one that we can relate to.

It does not help that for much of the film the dialogue is even more difficult to decipher than the plot.  How did this escape Sound editor Richard King or Nolan?  Understanding McConaughey’s muffled, laid-back Southern drawl is a continual challenge, while any actors who speak more clearly are drowned out by Hans Zimmer’s big bang score.