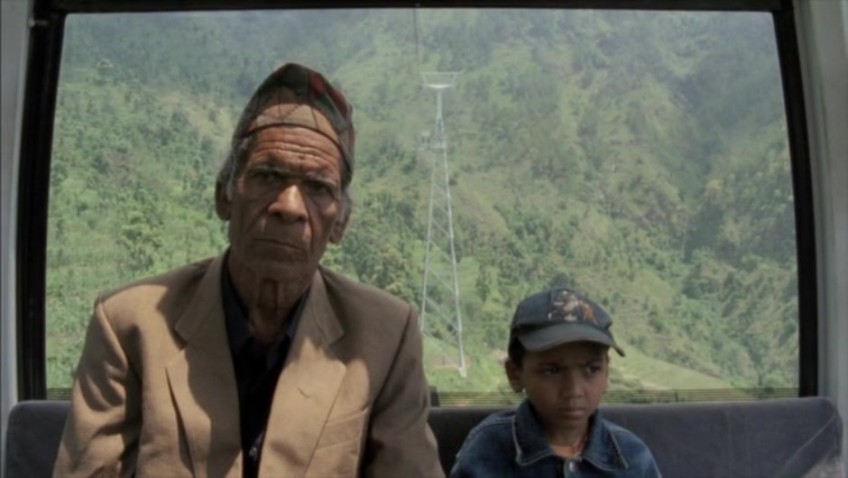 It used to be that pilgrims going up to the popular Hindu Temple of Manakamana in the Nepalese jungle had to walk for three days.  Now, the pilgrims travel by cable car to leave a prayer, and offering, to a wish-fulfilling goddess.

There is no narration or any context other than what we see. Manakamana is an original concept for a film, but whether you will be enthralled by watching the cable car journeys in real time for two-hours will be an individual matter.

A magazine of 400-foot 16mm film lasts 15 minutes, approximately the length of a cable car ride up the mountains to the Temple of Manakamana.  Moreover, 16mm cameras are small enough to allow the directors Stephanie Spray (who also recorded sound) and Pacho Velez (who operated the camera) to sit in the carriages directly opposite the pilgrims.

What you get is an even number of trips up the mountain to the shrine and down the mountain, although it is sometimes difficult to know which direction the car is travelling. When the cars go into the depot it is dark, and the surprise element is who will appear next – a bit like a casting director waiting to see who will step onto the stage.

The first couple, an older man and his grandson, go up in silence and we do not see them come down. A woman and her daughter come down eating ice-creams which melts all over them. A lone woman in an elaborate traditional dress, goes up with flowers and comes down without them after leaving her offering at the Temple.  More worrying, a trio of young, long-haired members of a band, go up to the Temple with a kitten.

We do not see them come down.  A couple with a chicken go up and come down without it.  They are much more relaxed on the descent, commenting on the changing roofs of the houses (thatch, tin and slate) and how the corn is planted close together and ‘looks nice’.  This reminds the woman that, ‘it is time for us to plant.’

In addition to the grandfather/grandson, the single woman, the boy band and the farming couple, we also watch an American woman and her girl friend, who might be Nepalese, (they ride half-way up in silence only for us to discover that they are together) and a duo who practise traditional Nepalese instruments for a gig as they go up.  One modified carriage consists of four frightened goats. We can only contemplate their fate.

There is something almost surreal in the contrast between the traditional and the modern against the backdrop of the magnificent hills (many passengers admire their beauty and are impressed with their height).

You start to notice the subtle reactions of the passengers both to the spiritual experience, the rather daunting cable ride, and to the camera itself. Manakamana is an unusual experience, but after a few trips, if you are not into the hypnotic rhythm of the droning cable, you might find your attention wandering.