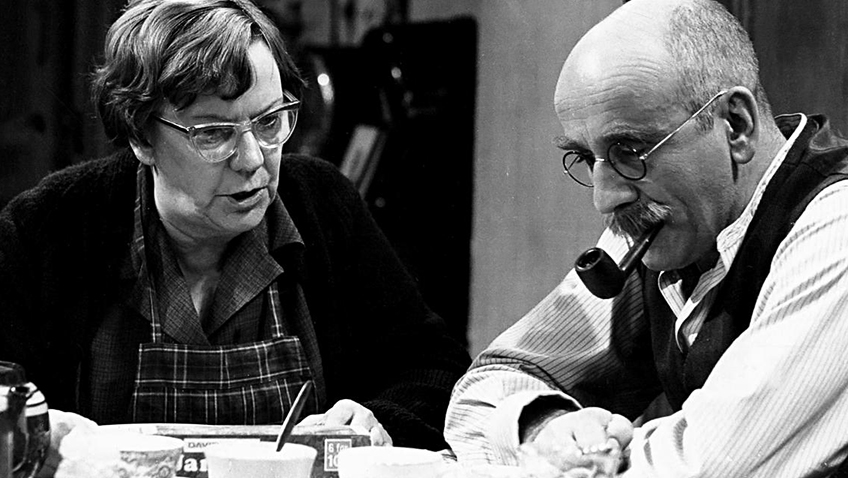 Alf Garnett, created by screenwriter Johnny Speight and performed by Warren Mitchell made his first appearance in 1965 in the British sit-com Till Death Do Us Part and went on to become one of TV’s most memorable creations.

Alf Garnett is a loud-mouthed, pipe-smoking, working-class Londoner, living in Wapping. He is a staunch Tory, an extremely right-wing bigot, who supports West Ham United.

He was meant to be a figure of ridicule but many viewers took him at face value and did not realise that Johnny Speight was satirising their ignorance and prejudice.

Till Death Do Us Part (StudioCanal). This 1968 film is a prequel to the television series and shows how Alf Garnett behaved during World War 2. He behaved badly. No surprise there. The bombing and rationing and the sleeping in the underground brought out the worst in him. It’s one long rant. The surprise is it’s not that funny. Particularly despicable is his stealing his baby’s milk and his drunken pig behaviour at his daughter’s wedding. The series ends with the demolition of the street he lives in.

Till Death… The Complete Series (StudioCanal). Alf Garnett has retired and relocated in Eastbourne. He’s still lying about what he did in the war. He’s still shouting and grumbling. He is anti-Thatcher and pro-God. High spots include a racist rant on the phone. Speight’s script was topical. Alf supports (as you would expect) Mary Whitehouse’s private prosecution of Howard Brenton’s Romans in Britain at the National Theatre for simulating gross indecency.

The Thoughts of Chairman Alf (StudioCanal) was played as a one-man music hall act to a live studio audience in a mock-up of a music hall theatre. I had seen Warren Mitchell on the stage when he performed it at the Whitehall Theatre. Perhaps the most revealing thing about the stage show was the audience’s ambiguous response. There was no ambiguity on TV.

Boy Erased (Focus). Baptists parents (Nicole Kidman and Russell Crowe) won’t accept their son (Lucas Hedges) is gay and make him attend a conversion therapy program run by a man who has no qualifications for the job and argues the God doesn’t love homosexuals if they continue to be homosexual. This is a worthy but somewhat pedestrian film, directed by Joel Edgerton, is based on Garrard Cowley’s memoir of his own experience and is clearly a polemic aimed at misguided religious parents who want their offspring to change when it is they who have to change. Edgerton also plays the therapist who bullies his patients. Conversion therapy has affected at least 700,000 LGBTQ Americans. 36 states still legally allow conversion therapy to be practised on minors.

Can You Ever Forgive Me? (20th Century Fox). True story: Lee Israel (1939-2014), once a successful writer, is now 51, living in squalor, unable to find a publisher and unable pay the rent. She turns to forging letters from famous writers and actors (such as Noel Coward, Marlene Dietrich, Dorothy Parker, etc) and to stealing original copies from libraries. She sold over 400 forgeries before she was caught. She was proud of her success and told the court she had no regret since it was the best time of her life. She considered the forgeries her best work. Melissa McCarthy plays the frumpy, heavy-drinking author. Richard E. Grant plays her partner in crime, a flamboyantly gay fence.