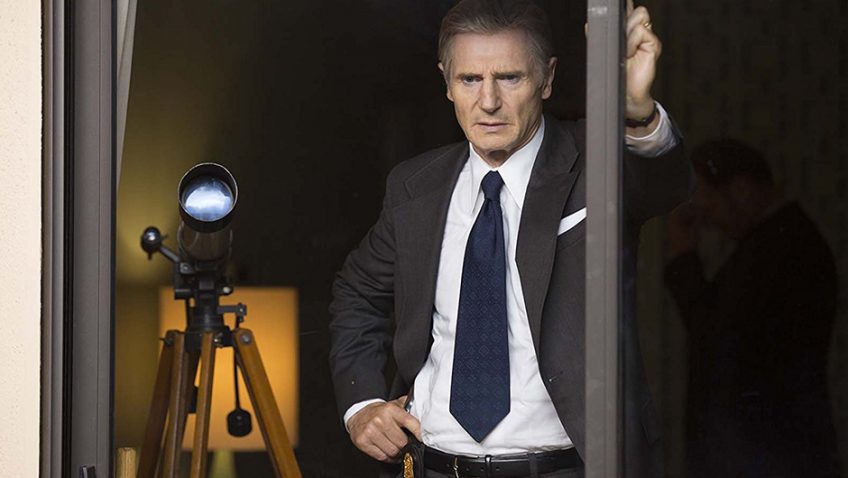 From 1972 until a confessional interview appeared in Vanity Fair Magazine in 2005, Washington DC played a long guessing game. Who was the leak known as Deep Throat that fed insider information about the Watergate burglary to Washington Post reporters Woodward and Bernstein, (the heroes of the film All the President’s Men)? Like that film, and the more recent The Post, Donald Trump has given Mark Felt’s story a new relevance that makes the film’s shortcomings as a biopic/thriller all the more regrettable. 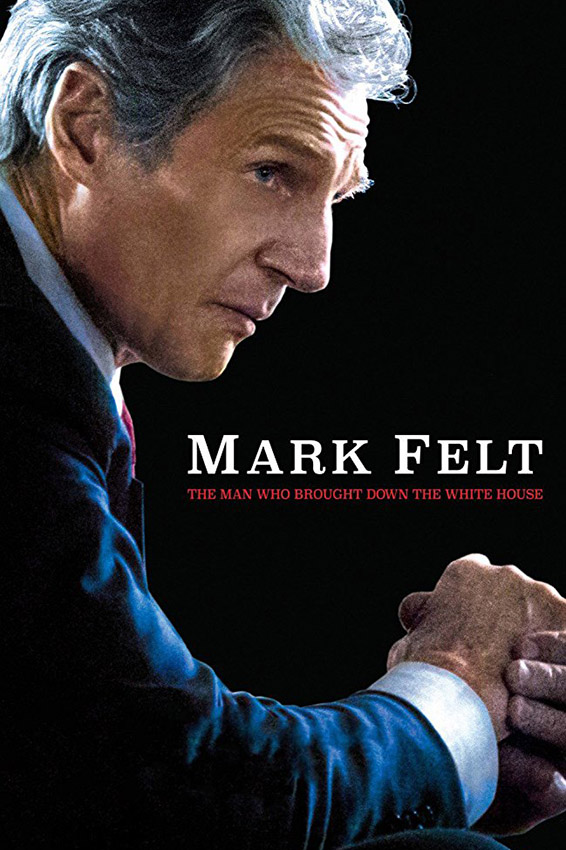 The first thing that should go is the tabloid title. Felt was instrumental in enabling top secret information to reach the press, but a myriad of forces coalesced to oust Richard Nixon.

The revelation was that the leak was Mark Felt, Associate Director of the FBI and loyal right-hand man to J. Edgar Hoover, who died six weeks before the burglary. Who would have thought? Well, actually, a lot of people, including White House Counsel to Nixon, John Dean (Michael C. Hall); Charlie Bates (Josh Lucas), an FBI agent and lieutenant to Felt; Nixon himself (seen in archive footage) and Felt’s boss, Patrick Gray, appointed by Nixon to replace Hoover.

Gray does not come across well in the film, but it was Gray who defended Felt against the accusations and when Gray was forced out, recommended Felt as his successor. Felt’s real nemesis is sleazy Bill Sullivan (Tom Sizemore) the former Head of the FBI’s Intelligence Operations. When passed over for the top job himself, he leaks truths and half-truths to discredit the agency and then tries blackmail. While Felt’s view of Sullivan might be biased, Sullivan is the guy who called Martin Luther King, ‘a fraud, demagogue and scoundrel.’

Gray might have had been handed the plum appointment, but as the film shows, Felt knows that information is power, and we see him hold onto those files that Hoover’s private secretary did not destroy.

If Felt is disappointed it is not only because he feels he deserves the job after 30 years of service in Washington DC and in 13 field offices, but because Gray has no law enforcement experience and is an outsider. Such is Felt’s commitment to The Agency that he tells Gray he will help him, ‘as long as you put the FBI first.’ 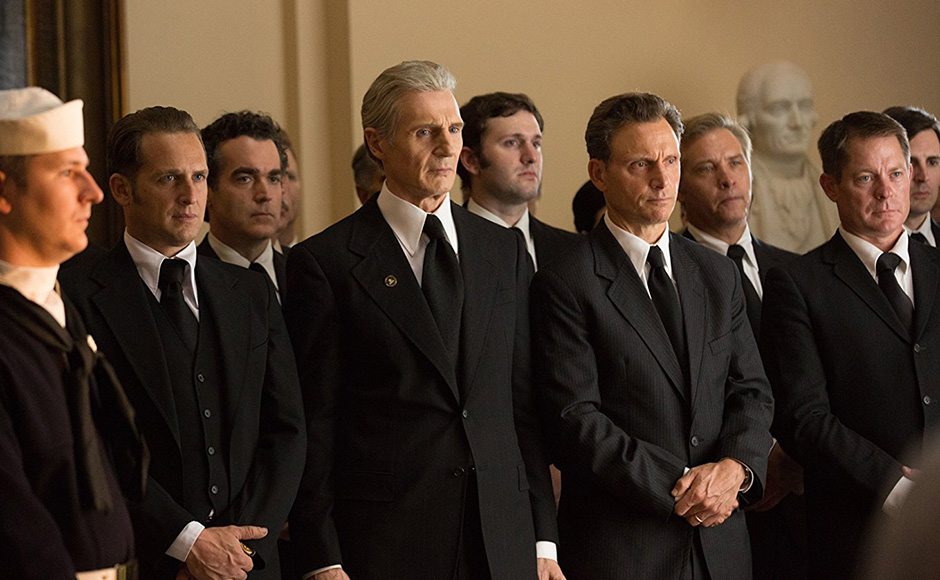 Gray’s handling of the news of the Watergate break-in on 17 June 1972, convinces Felt that Gray is not putting the FBI first. Felt suspects that Gray was appointed because The White House wants a puppet and sure enough he tells Felt that the Watergate Investigation has been wrapped up – no doubt on White House orders.

Felt is suspicious when he notes that John Dean has paid a call to the FBI and Gray mumbles something about obtaining White House authorisation. Felt, a tall, imposing man, leans over Gray’s desk and reminds him: ‘The FBI is an independent body; you don’t have to get their permission to do anything.’

In another scene, Dean, the architect of the break-in, calls Felt to insist on the FBI identifying the source of the leak to the press. Felt tells him point blank that, ‘the White House has no authority to give orders to the FBI.’

This belief in the FBI’s independence from party political interests is the motivating factor behind Felt’s decision to have coffee meetings with Sandy Smith (Bruce Greenwood) of Time Magazine in two of the best, though brief, scenes of the film. 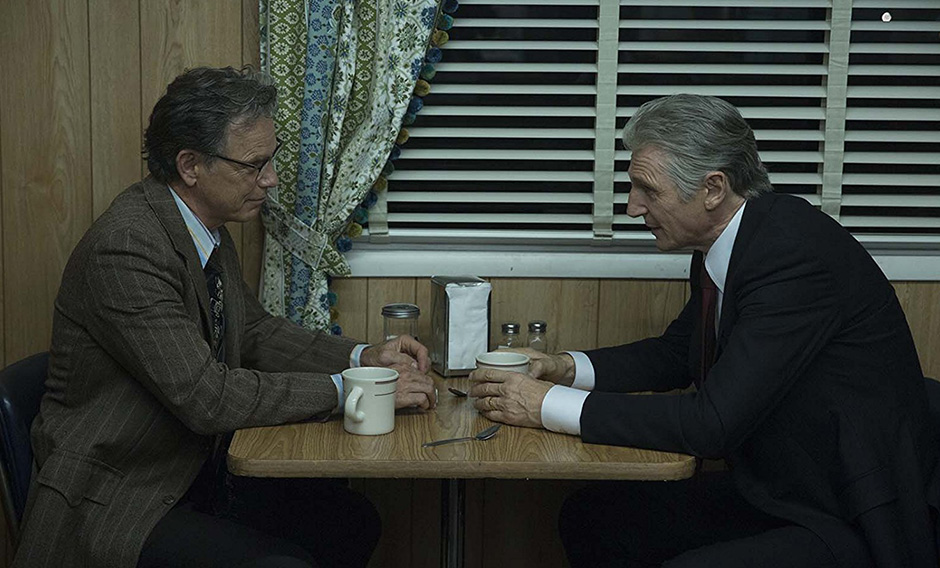 Liam Neeson and Bruce Greenwood in Mark Felt: The Man Who Brought Down the White House

Felt is no saint although writer/director Peter Landesman (based on books by Felt and John D. O’Connor

) does not dwell on the negative aspects of the film’s hero. When the film begins Felt is carrying out a holy crusade against the Weather Underground group. He will be indicted (and later pardoned by Ronald Reagan) for illegal searches and break-ins that ultimately undermined the Government’s case against the group, but this is confined to a caption at the end. The relevance of the Weathermen (as the militant left-wing group was known) is not immediately apparent, but we later realise it is partly a personal vendetta. Mark and Audrey’s (Diane Lane) marriage is strained by the disappearance of their only daughter, Joan Felt (Maika Monroe), who, Mark incorrectly believes, is the victim of the Weathermen. 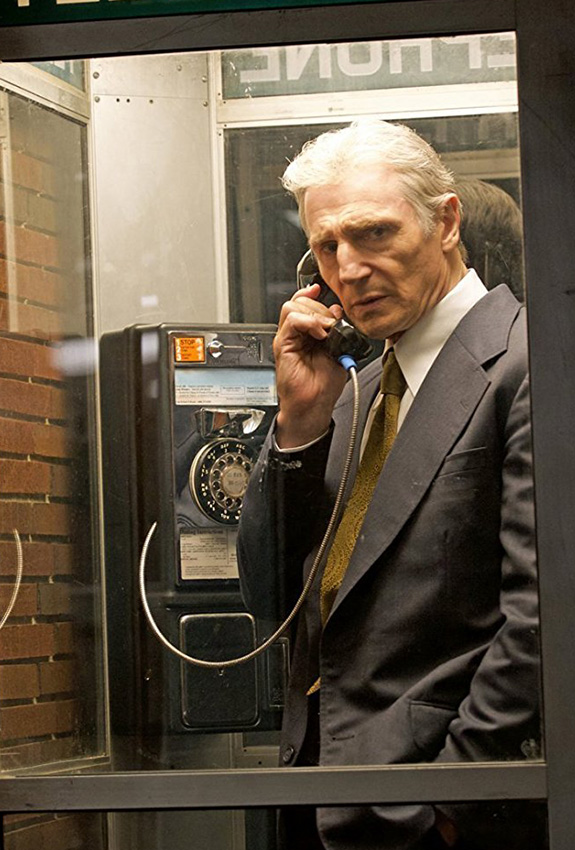 Liam Neeson in Mark Felt: The Man Who Brought Down the White House

The marriage is also strained by Aubrey putting her own life and career on hold for that top job – that ultimately eluded her husband. At home all day, entertaining her husband’s cronies at night, Aubrey seeks solace in the bottle. Aubrey’s ’30 years, 13 transfers, 13 houses to leave, friends to make and leave’ speech is powerful, but her character is underwritten. This is a shame as her tragedy reveals the true extent of Felt’s dedication to this job and of Nixon’s crime.

With Felt’s trademark elegantly brushed back pale grey hair, sold American accent and authoritative composure, Liam Neeson towers over the bland looking film. Neeson might seem like an odd choice, but he conveys Felt’s lethal intelligence; his confidence that comes from experience and his vulnerability. The scene in which Felt is reunited with Joan and his grandchild on a commune is truly moving (and authentic). And there is something compelling about the soul-searching of a man so committed to the ideals and independence of the FBI that he feels duty bound to expose its collusion with the White House.

The supporting characters fare less well as their roles are so underwritten that it is difficult to distinguish the various agents in the anodyne FBI Headquarters where most of the film takes place. Bob Woodward (a miscast Julian Morris) pops up in the garage scene recognisable from other films, but Landesman wants to shift the action away from the much-covered Woodward and Bernstein Washington Post angle.

This is an interesting approach as the day-to-day intrigue, gripes, suspicions and power plays within the corridors of the FBI ring true. Still, for a movie about Deep Throat, there’s too little whispering to the press. We want to see how Felt’s words are turned into the headlines that created all that panic and rolled all those heads.