Home / LIFESTYLE / REVIEWS > / FILM REVIEWS / Is this version of Hardy’s classic just too far from the original? 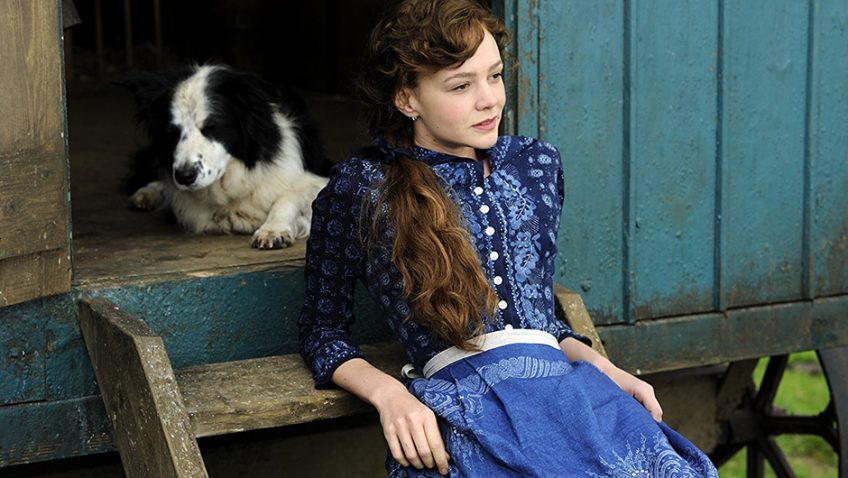 Is this version of Hardy’s classic just too far from the original?

It is almost 50 years since John Schlesinger’s dark, romantic and faithful adaptation of Far from the Madding Crowd became a cinema classic. Four of the hottest British actors of the 1960s formed a perfect cast: Julie Christie as Bathsheba Everdeen, Alan Bates as Gabriel Oak, Terrence Stamp as Sergeant Troy and Peter Finch as William Boldwood.

for a new generation (or two). Even without a recent re-issue of Schlesinger film with a beautiful new print, a comparison was going to be inevitable. For those who have neither read the novel nor seen the film, the story and performances are strong enough to keep you involved, but under-whelmed and unconvinced by David Nicholls’ script and the odd casting.

Vinterberg’s Far from the Madding Crowd

sucks out the drama and the depth from too many scenes to become a new classic. The story, at its most basic (the novel is some 400 pages long) centres on the headstrong, proud, teasing, but basically decent, 24-year-old orphan Bathsheba Everdene (Carey Mulligan). Working on a relative’s farm, she meets the reserved sheep farmer Gabriel Oak (Matthias Schoenaerts) and rejects his proposal of marriage.  Not long after, Everdene inherits a rundown manor house and large farm. She is determined to dig in with the hired hands and restore it to its former glory. Oak, who loses his herd and livelihood in a tragic accident, is taken on as Bathsheba’s new shepherd – becoming as indispensable and steadfast as his name implies.

Meanwhile, the older, wealthy landowner William Boldwood (Michael Sheen), Wessex’s most eligible widower, makes a bid to reverse years of solitude by proposing to Bathsheba.  Though rejected, he is elated when she asks him to be patient. To Boldwood’s dismay, Bathsheba is smitten by the itinerant Sergeant Frank Troy (Tom Sturridge) and the two marry. Unbeknown to Bathsheba, Troy had just broken off his shot-gun marriage to one of her employees, Fanny (Juno Temple) due to a misunderstanding that left him humiliated. Though Troy proves to be an irresponsible gambler, Bathsheba is horrified when he declares that he still loves Fanny.  With their marriage on the rocks, Troy, disappears, presumed drowned. He reappears just as Boldwood dares to hope.  Throughout this turmoil, Bathsheba depends on Gabriel. 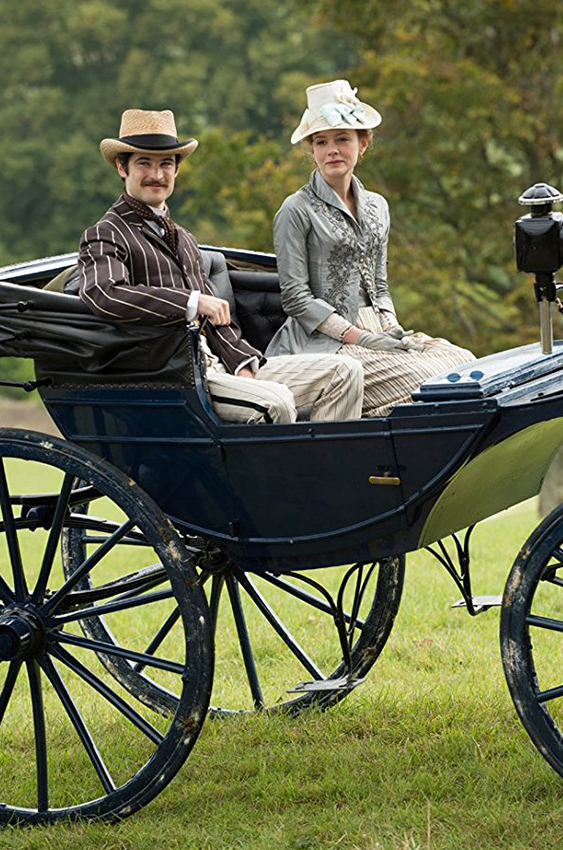 Tom Sturridge and Carey Mulligan in Far from the Madding Crowd

While it is not easy to single out any scene from Vinterberg’s film as particularly distinctive, there are at least four scenes that are forever embedded in the memories of those who saw Schlesinger’s film. The first is Gabriel’s proposal, which includes Hardy’s line,  ‘And at home by the fire, whenever you look up, there I shall be – and whenever I look up, there will be you.’ When Alan Bates’ Gabriel, with that twinkle in his eye and low-key sexuality, repeats this proposal at the end, there cannot be a dry eye in the house.  Vinterberg omits it entirely. This is like remaking Gone with the Wind and leaving out, ‘Frankly, my dear, I don’t give a damn’.

The second scene is the living nightmare where Gabriel’s rogue dog gets loose among the sheep. It is much more dramatic and atmospheric in the 1967 film thanks to Schlesinger’s suspenseful inter-cutting and Nicolas Roeg’s magnificent and inventive cinematography.

Third is Troy’s display of swordsmanship that Schlesinger sets in the crevice of the rugged heath, with Bathsheba both frightened and aroused by this clearly phallic exhibition. The scene lasts some 3 minutes with Terence Stamp’s gorgeous Troy audaciously intense and dangerously seductive. He twirls and jabs the sword at Bathsheba as though foreshadowing his destruction of their marriage. Tom Sturridge, currently on stage in London as the wimpy, whining drug addict in David Mamet’s American Buffalo, is too physically fragile to convince as a soldier, and lacking in the charisma or charm of a lover.

Even someone as emotionally immature as Bathsheba would not shun the hunk that is Matthias Schoenaerts, or the rugged good looks and refined maturity of Peter Finch for Sturridge’s Troy. As if Vinterberg is reluctant to compete with the previous work, the sword scene here is fairly instant and instantly forgettable. And this leads to the problem of casting. Bathsheba is not drawn to men for their wealth and so we fail to comprehend her attraction to Troy. This is accentuated by the decision to cast the obviously sexy, strong and handsome Schoenaerts. What is needed is someone with the slow-burning appeal of an Alan Bates’. Bathsheba may make life hard on herself, but when the audience can’t fathom the attraction, the story suffers. 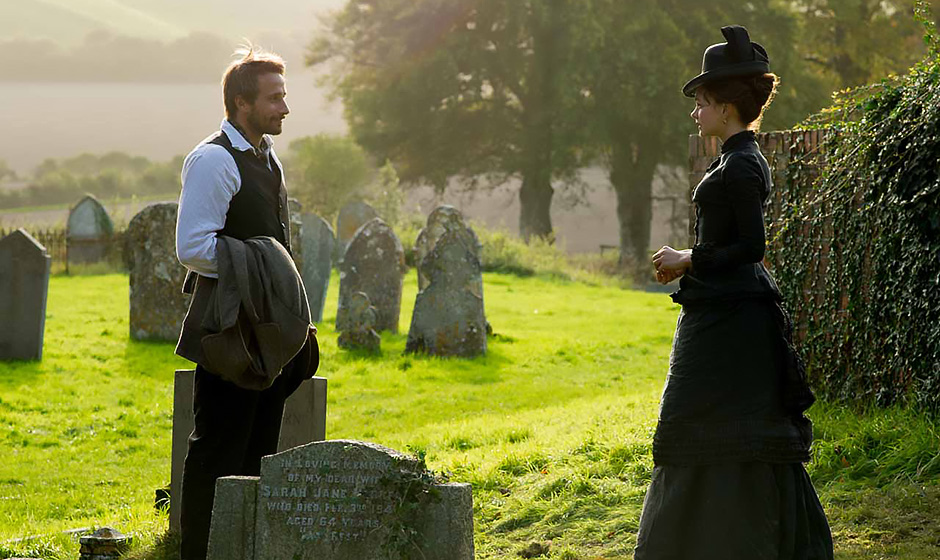 Matthias Schoenaerts and Carey Mulligan in Far from the Madding Crowd

The fourth scene is Boldwood’s party, and in particular, the fatal shooting that gave rise to arguably the most powerful reaction shot in cinema. As Bathsheba throws herself across Troy’s body, Schlesinger closes in on Finch’s face long enough to let us read the cavalcade of emotions reflected in his beautiful eyes and running through every line in his skin. Vinterberg not only sets this climatic scene outdoors, rather than inside Boldwood’s first party in years, he frames the shooting as a long shot so we do not even see Michael Sheen’s face.

Carey Mulligan is one of the best actresses of her generation, but she is no more convincing as a farmer than Christie, and far less believable as a femme fatale, capable of driving three different men to distraction. While the chemistry between Christie and her three co-stars was palpable, for chemistry with Carey Mulligan, you will have to have seen her opposite Bill Nighy in their recent revival of Skylight; or in An Education with Peter Sarsgaard or even Inside Llewyn Davis with Justin Timberlake and Oscar Issac.

Finally, Schlesinger daringly ends his film with the recurrent miniature soldier-figure haunting the home of a still physically reserved Gabriel and Bathsheba, reflecting the fatalistic nature of Hardy’s work. Vineberg ends his film with the two, instantly intertwined after their reconciliation, walking home in the sunset.