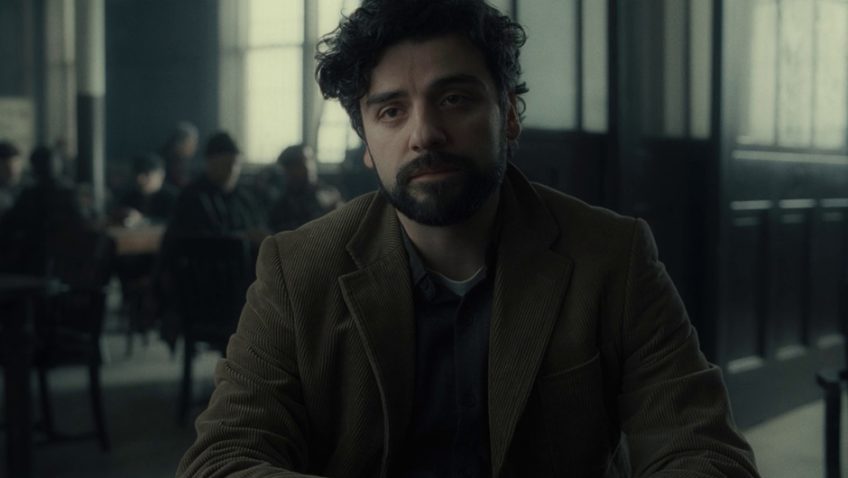 Inside Llewyn Davis is a masterpiece by the Coen Brothers

is to the New York City folk music scene of 1961 what their film Barton Fink was to the California film production scene of 1941. And, like Barton Fink, although Inside Llewyn Davis

was disgracefully overlooked at this years’ awards season, it is a masterpiece.

Both films chronicle a nightmarish period in the lives of a lonely, insecure artist trying to find his place in a changing world and artistic landscape, without compromising his integrity. Davis is a folk singer and guitarist whose musical partner has just committed suicide, and Fink, a highbrow Broadway playwright is lured to Hollywood to write scripts. Though made 22 years apart, both films feature John Goodman in a supporting role (here, as a sickly, obnoxious Jazz performer critical of Folk music). If Fink was modeled very loosely after Clifford Odets, there are similarities between Davis and Dave Van Ronk, whose 1964 album ‘Inside Dave Van Ronk’ inspired the film’s title.

Like Van Ronk, Davis, portrayed by Oscar Isaac, has a foreign name, sports a dark beard; is a familiar sight at the Gaslight club; has worked in the Merchant Marine (Van Rank also lost his Pilot’s licence) and sings old ballads like Hang Me and Shoals of Herring. Credit for the film’s authentic and marvelous music goes to consultant T Bone Burnett who worked with Bob Dylan (as did Van Ronk) and coached Isaac. Like Van Ronk, Davis has an awkward audition for the owner of the famous Gate of Horn in Chicago. Al Grossman, who managed Dylan and Peter Paul and Mary, is Bud Grossman in the film – a wonderful cameo from F Murray Abraham.

But there is a difference. Davis, freezing and exhausted after a hellish ride to Chicago (a Gothic version of Kerouac’s On the Road) learns that his manager (a hilarious Alex Karpovsky) never sent Grossman his solo album and seems perversely determined to seal his own fate. He chooses to sing, albeit superbly, a depressing ballad about Queen Jane Seymour dying in childbirth. ‘I don’t see a lot of money in that,’ is Grossman’s icy response.

The trials and tribulations of a week in the life of Llewyn Davis, are pure invention, as is Davis’ complex personality. Davis is a sponger and self-obsessed bungler who speaks insensitively and acts without thinking. But when he sings – and the astonishing Oscar Isaac, in his breakthrough performance, sings and plays the guitar beautifully – you could forgive him anything.

Oscar Isaac in Inside Llewyn Davis

Throughout the film Davis, perhaps angry at being abandoned by his partner, Mike, or bitter that he hasn’t got what it takes, alienates people and bites the hands that, quite literally, feed and shelter him. These include the folk duo Jean (British actress Carey Mulligan) and Jim Berkey (the singer/actor Justin Timberlake; Davis’ suburban sister Joy (Jeanine Serralles) and uptown academics Mitch Gorfein (Ethan Philips) and his wife who seem to put up with Davis for the sake of his more sociable former partner Mike.

It’s typical of Davis that when Jim gets him a gig recording his comic song Please Mr Kennedy, Davis criticises the song, unaware that Jim wrote it. And in his haste for cash to pay for Jean’s abortion (his romantic life is also a mess), he foregoes the royalties. The Coen Brothers ensure that Davis, and the audience, learn that the song, about an astronaut, has become a hit. 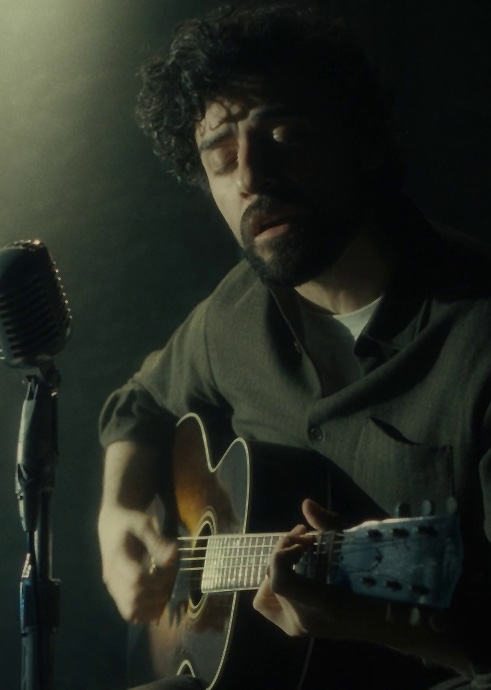 Oscar Isaac in Inside Llewyn Davis

If the plot is a week in the life of a desperate, homeless man losing sight of his dream, the frigid, winter atmosphere; the authentic-looking set for the legendary Gaslight Club where young Dylan sang; the intriguing details and the circular structure of the film make it feel as rich, multi-layered and complex as great poetry. As in their film ‘Oh Brother Where Art Thou?’, the music helps define the era that many readers may remember first hand.

Running through the film is the parallel saga of two golden tabby cats, one symbolically named Ulysses, who turns out to be a wanderer like Davis. Late in the film Davis notices a poster for the Walt Disney film The Incredible Journey (released in 1963), in which a cat finds its way home after being separated from its owners.

If the fate of two cats weigh on Davis’s conscience, so does his own. The Coen Brothers might be hinting at that fate when, in an electrifying, haunting moment, Davis has just sung Fare Thee Well and is now crouched and bleeding after an assault in the back alley. Through his pain he hears newcomer Bob Dylan faintly singing Farewell, a song that was later recorded at the Gaslight and bootlegged.