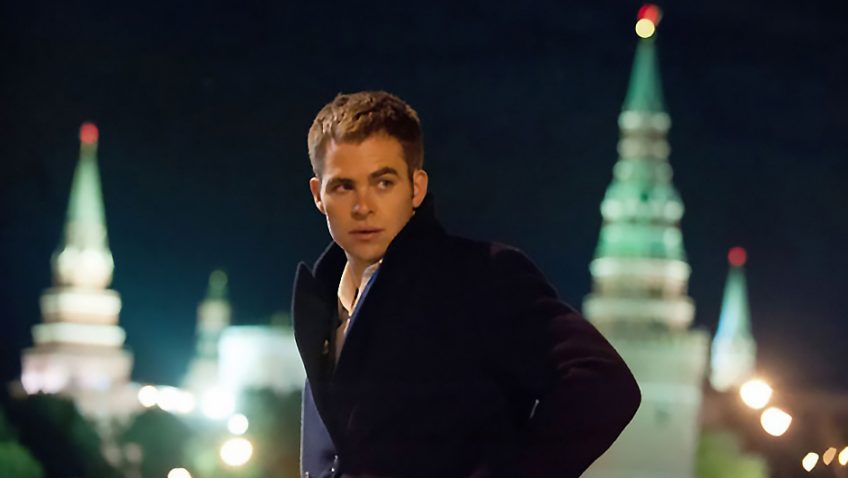 The handsome, personable, all-American Chris Pine, who rose to fame as Captain Kirk in the 2009 film reboot of Star Trek, is portraying Tom Clancy’s most bankable character, Jack Ryan.

The wonderful old Millennium feel to The Hunt for Red October, Patriot Games, Clear and Present Danger and The Sum of All Fears gives way to new threats as Jack Ryan: Shadow Recruit

establishes itself in the new Millennium with the attack on World Trade Center.

But wait a minute! The enemy is not an Islamic fundamentalist group but another Russian oligarch, played by the cuddly, oh-so-British Sir Kenneth Branagh, the film’s Director (Thor, Hamlet, Henry V).

runs out of steam just as it finally gets going.

Ryan, a doctoral student at London School of Economics, is fuelled with outrage and patriotic fervor after witnessing the attack on the Twin Towers. He drops out of school and joins the Marines. After a short, heroic tour of active duty, Ryan is invalided out, only to be recruited by the CIA’s Thomas Harper (Kevin Costner). His new mission, after conquering his injuries and his physical therapist, Cathy (Keira Knightley), is to go undercover on Wall Street.

As a Compliance Office he will be well placed to ferret out terrorist money laundering transactions. Like Harry Tasker in the 1994 spy comedy, True Lies, Ryan leads a double life that affects his relationship with Cathy: long on hours and short on answers.

Cathy decides to surprise her boyfriend in Moscow (as one does) where she becomes prime kidnap material, the kind that can engender the obligatory car race scene. 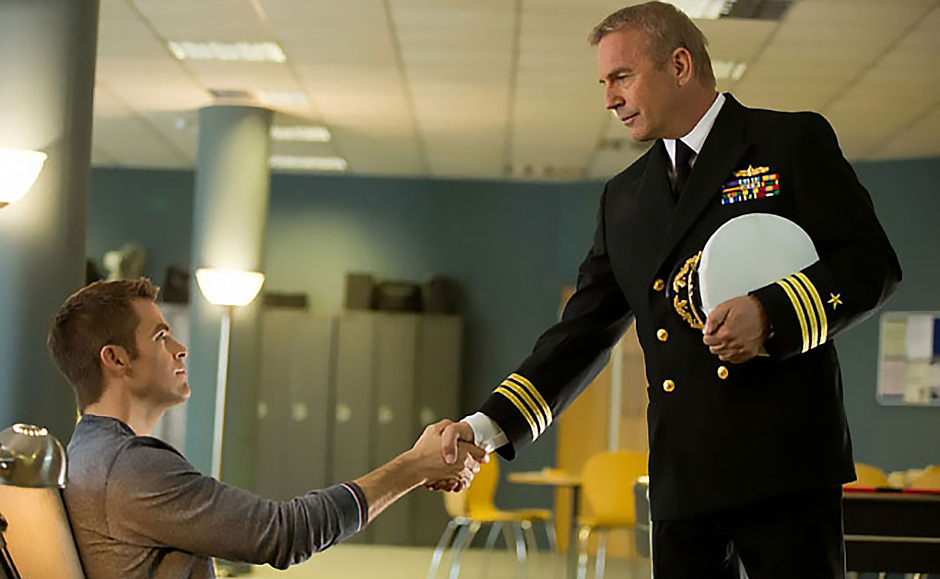 The build up is the best part of the film as the premise is full of potential. If Pine, who was hired to pull in the youth market, is no match for Harrison Ford, he’s convincing and likeable as the economics whiz-turned Marine-turned Wall Street analyst.  What he, or at least his character, is not, is Jason Bourne or James Bond, and not only because Ryan’s initials aren’t JB.

We just don’t believe that this brainy academic can, even with a short stint in the Marines, transform himself into an action hero capable of single-handedly (if we exclude Harper) saving the world.

That said the task is made easier because as far as cinema’s psychotic villains go, Branagh’s Viktor Cherevin barely rates. Knightley, as usual, adds little but eye candy to the production and has nothing to do but flirt with a far too gullible villain and then look defiant.

Branagh did a good job directing the romantic fantasy Thor, but to succeed in the crowded spy thriller market you need tight, inventive direction, and more wit and distinguishing features than Adam Cozad could muster in his debut script, even with the help of the very talented scriptwriter David Koepp (Ghost Town, Panic Room, Indian Jones and the Kingdom of the Crystal Skull).

, is entertaining action fare for a Saturday night, but with its prestigious pedigree, we expect a more memorable experience.