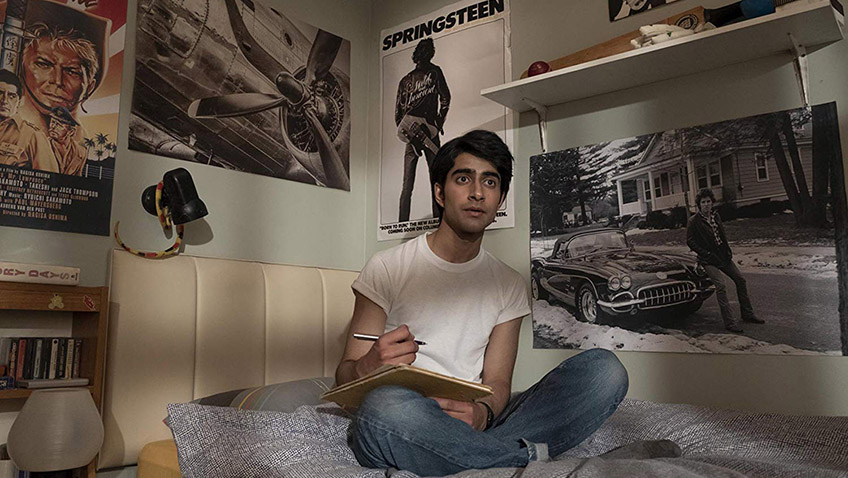 Born of Indian parents in Nairobi 59 years ago and raised in London, Gurinder Chadha is not only one of the UK’s most prolific British female filmmakers but has remained committed to portraying the duality of Anglo-Indian life in the UK. None of her films to date did this better than Bend it Like Beckham (2002), a critical and commercial hit that she has struggled to match in her uneven career.

Six years after ‘Beckham’ was released, a Pakistani Muslim named Sarfraz Manzoor, who came of age in Luton in the 1980s, wrote an autobiography entitled Greetings from Bury Park

. The title refers to both Luton and Bruce Springsteen’s 1972 debut album, Greetings from Asbury Park, N.J.

You don’t have to finish the book to wonder what took so long for Chadha to turn it into the uplifting, ebullient Blinded by the Light

Springsteen is to Chadha’s new film what David Beckham was to ‘Bend it Like Beckham’. The film is reminiscent of Bend it like Beckham in the obstacles the lead character faces; in the conflict between a sister’s wedding and tickets to a football game/rock concert; and in the family culture clashes. Like the film Yesterday with its Beatles theme, Blinded by the Light

is sometimes self-indulgent and heavy-handed and has a schmaltzy ending. But Chadha has made an anthem to repressed youth and to a Holyland for all races, religions and nationalities. If you grew up dancing in the dark with The Boss you will watch with a big smile as the frustrated, lost and torn teenager Javed (Viveik Kalra) grapples toward the promise land.

It is 1987 and Javed lives in a housing complex in the industrial city of Luton with his traditional Muslim family. Madonna was doing aerobics to Born to Run at Jane Fonda’s Workout in Beverly Hills in 1977, but that album – and Springsteen – had by-passed Javed’s generation. Javed’s best friend Matt, (Dean-Charles Chapman) is popular with sexy girls and plays in a band, for which Javed sometimes writes lyrics. Matt, however, has no interest in Springsteen – and the soundtrack is sprinkled with other period music.

If Javed struggles to fit in at school, it is worse at home. In a first-person narration he tells us that his father, Malik (Kulvinder Ghir), ‘treats me like I’m 6, not 16’ and Malik warns his son to ‘stay away from girls and stick with the Jews – they’re successful.’ Javed, who wants to be a writer, is convinced that university is his ticket out of Luton, but Malik does not consider writing to be a profession. Malik is even more closed-minded when it comes to his daughters; we’ve seen it all in Bend it Like Beckham.

Javed is challenged by external events, too, including unemployment and the National Front, both of which affect his family and his dreams of another life.

When Malik, who has worked for the GM factory for nearly 20 years, is made redundant, he forces his wife and daughter to sew, turning the living room into a sweat shop. As in the novel, the women, who have a talent for creating stylish clothes and have become the family breadwinners, must hand over the profits to Malik. While Malik helps his fellow Pakistani friends with emigration forms free of charge, Javed finds after school employment with Matt’s father (Rob Brydon) who runs a clothing market stall and, as it turns out, is a fan of Bruce Springsteen. 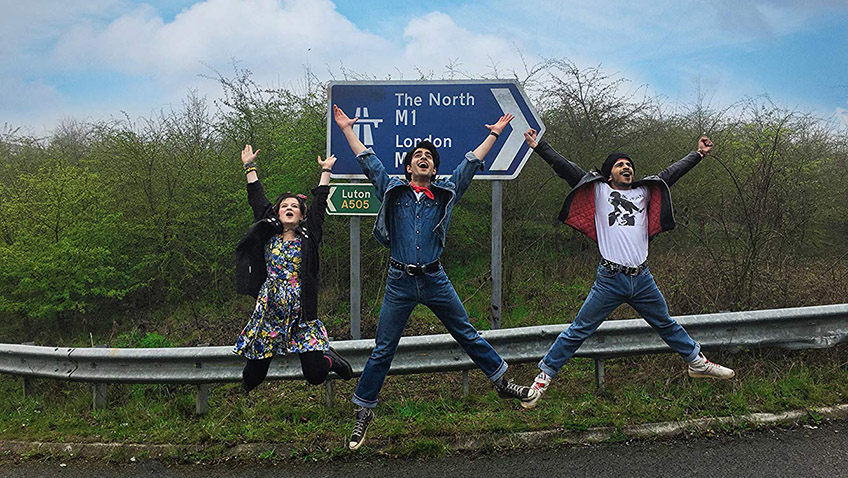 Nell Williams, Aaron Phagura and Viveik Kalra in Blinded by the Light

The day that marginalised student Roops (Aaron Phagura), lends his Springsteen cassettes to Javed, is the day that changes Javed’s life. Javed is ecstatic and tells Roops: ‘Bruce knows everything about me’, a sentiment that Javed, as an aspiring writer, will one day recognise as Springsteen’s universality. But what will prompt Javed to visit Asbury Park, New Jersey is that Bruce, whose father was an unemployed bus driver, also came from humble beginnings and changed his fate. For all his talk of driving away and getting out of town, Springsteen returned to New Jersey to raise his own children, and Javed, who escapes to Manchester, learns the metaphorical value of the lyrics.

In Chadha’s inspired use of the 1987 hurricane, she uses film and music to express the euphoria of finding faith through music. Javed puts on The Promised Land (‘Well, there’s a dark cloud rising from the desert floor/I packed my bags and I’m heading straight into the storm’) and heads out into the literal storm where the old poems he has ripped up after an argument with his father blow through the cul-de-sac and the song’s lyrics are projected across the walls of houses and garages.

The Dancing in the Dark, lyrics, ‘’Man I’m just tired and bored with myself…There’s something happening somewhere’ make Javed even more determined to find his promised land. He begins to style his hair and dress like The Boss.

The euphoria of being consumed by pop music is again turned into a dazzling set piece when Javed and Matt’s dad lead the market shoppers in a joyous musical number to Thunder Road. Amongst the shoppers is Eliza (Nell Williams) a pretty, rebellious, white student. Javed has a crush on Eliza but believes that she is beyond his reach. Eliza, though, gets carried away by the majestic music and escapist lyrics, ‘Well the night’s bursting open these two lanes will take us anywhere/we got one last chance to make it real/to trade in these wings on some wheels…’

‘Show a little faith, there’s magic in the night’ is what Bruce sings to his girl, but Javed needs to encourage himself. He must find the faith to confront the elitist editor of the school paper about writing an article, and to ask Eliza on a date.

The date is not going well until Javed slaps on his headphones and finds courage in the lyrics of “Prove It All Night” which he starts reciting out-loud like a looney: ‘Everybody’s got a hunger, a hunger they can’t resist…’ Strengthened by the song, Javed sweeps Eliza up in the music with a confident kiss that she reciprocates.

Brace yourself for Javed’s soppy high-school speech that incorporates the song on Springsteen’s first album that lends the film its title. The album is about making it through boyhood and becoming an adult; Javed is heading for the promised land and invites his father to come along with the ride. This long graduation scene and what follows amounts to overkill. There must be a better way to end a film inspired by the man who never wrote a predictable line or a clichéd lyric in his life.