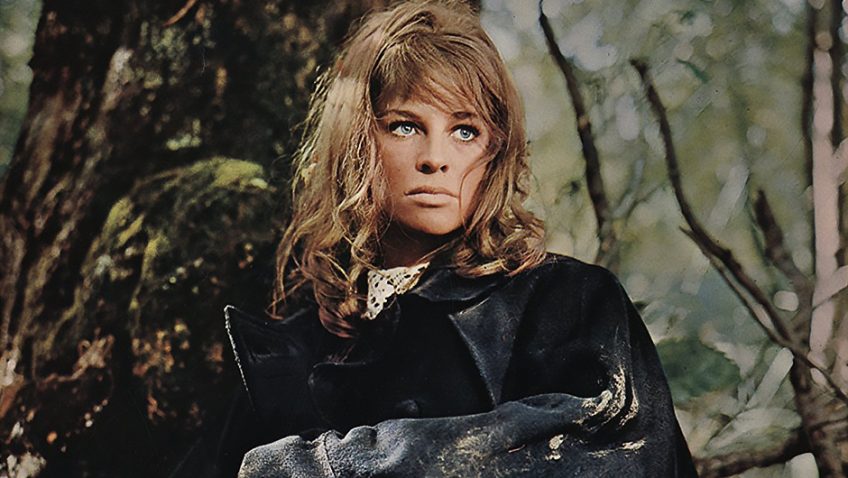 Arguably the best cinema adaptation of a Hardy novel

John Schlesinger’s dark, urban buddy movie Midnight Cowboy might be considered his masterpiece, and films like the Graduate, Hombre, Bonnie and Clyde, The Dirty Dozen and Valley of the Dolls might have been grabbing the headlines, but few people over 50 can think of Thomas Hardy, or, for that matter, Julie Christie, Terence Stamp, Alan Bates and Peter Finch, without thinking of Far from the Madding Crowd

Watching it 48 years after its initial release, you are struck by how well the film has stood the test of time and by how much of it you remember. This is not only due to Frederic Raphael’s script (he wrote Darling (1965) and the superb Two for the Road (also 1967); Richard Rodney Bennett’s Oscar winning score and Nicolas Roeg’s gorgeous cinematography; but to the perfect casting of four of the hottest actors working in Britain.

Julie Christie was, and still is, a controversial choice, but who but Christie could elicit proposals from two independent bachelors and win the most steadfast of hearts? As with any adaptation of a sprawling classic, you notice the condensation that makes the plot turns seem more like coincidences than they appear in the novel 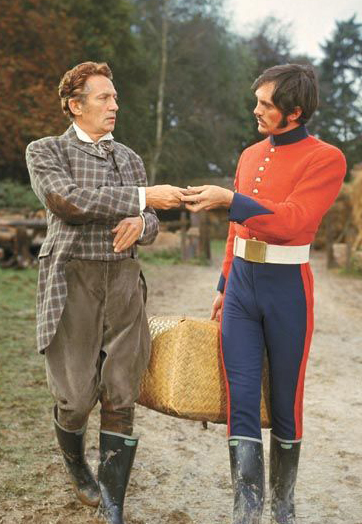 Terence Stamp and Peter Finch in Far from the Madding Crowd

It seems that only a few weeks pass after the teasing, headstrong farm girl Bathsheba Everdene (Christie) rejects the besotted shepherd Gabriel Oak (Bates) that he stumbles across her, just as she has inherited a sheep farm and he is penniless, and in need of work.  But, shot in Panavision on location in stormy Dorset and Wiltshire, no one can forget how Gabriel loses his livelihood, the sheep that were to be solid to guarantee his future with Bathsheba.

Bathsheba, however, could not be content to marry a shepherd, or any man she did not love.  Indeed the film is, to a large extent, about the odd, irrational rules of attraction and the contrast between the dependable, steadfast lover and one who is exciting, but self-absorbed and fickle. The capricious Bathsheba’s romantic idea of love causes her to reject the advances of the wealthy, single farmer William Boldwood (Peter Finch), a good, if much older man.

Boldwood is ruggedly handsome and has rejected as many female suitors, as Bathsheba has male suitors.  Boldwood never stops hoping and it is that hope that proves to be his downfall. One of the great moments in cinema is the look on Boldwood’s face when he watches a hysterical Bathsheba spread herself over the bleeding body of her rogue husband, realising that he has sacrificed his life for an impossible happiness. Never has the incomprehensible nature of love been more profoundly expressed. 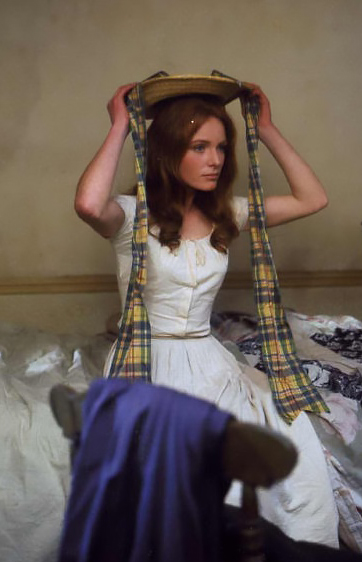 Prunella Ransome in Far from the Madding Crowd

The man who wins Bathsheba’s heart is the dashing cavalry officer, Sergeant Troy (Terence Stamp) who has just abandoned pregnant Fanny Robin (Prunella Ransome), a farm worker at Bathsheba’s farm, for showing up at the wrong church for their wedding.

Troy, in full uniform, displays his skills as a swordsman to Bathsheba, who stands trustingly in the crevice of huge earthworks as he dashes down the slopes as in a cavalry attack, brandishing his shiny sword in her direction.

As a way of courting someone, it is novel, and even Bathsheba does not know quite what to make of it. But the scene is far from gratuitous, and there are haunting echoes of it in a later circus scene and, ominously, at the end, when a scene of domestic bliss is marred by a miniature swordsman spinning around in an elaborate music box, Troy’s wedding gift to Bathsheba.

Far from the Madding Crowd

won only one Oscar (for the score), but did win two BAFTAs for Best Costume Design and Cinematography and did well at the UK box office. The film was not a success in the USA, however, and is not on anyone’s list of the top 100 films. Still, it is arguably the best cinema adaptation of a Hardy novel and is engrossing from start to finish.

We await the release, in the next two months, of Danish Director Thomas Vinterberg’s (The Hunt, The Celebration) remake of Far from the Madding Crowd

. It will be interesting to see how Carey Mulligan (An Education), Tom Sturridge (TV’s The Hollow Crown, Effie Gray) Matthias Schoenaerts (Rust and Bone, Bullhead) and Michael Sheen (as Boldwood) compare with the 1967 cast.