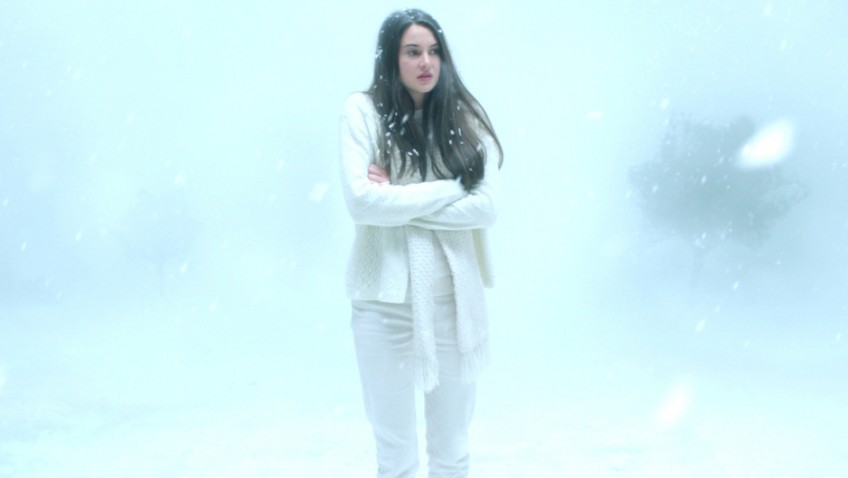 Shailene Woodley triumphs in this film

Gregg Araki White Bird in a Blizzard might not be perfect, but there is still much to enjoy and admire about the film, including a terrific performance from ‘Divergent’ star Shailene Woodley and the rest of an interesting cast.

You suspect the film is based on a novel (in this case, by Laura Kasischke) when protagonist Kat Connor so eloquently tells us: ‘I was age 17 when my mother disappeared without a word, just as I was becoming nothing but my body, flesh, blood and raging hormones – she stepped out of hers and left it behind.’

In his daring, if not entirely successful adaptation Araki blends a suburban thriller into a rather wonderful coming-of-age movie as that 17-year-old girl discovers her sexuality, and more than she wants to know about her mother’s and father’s sexuality, too.

The 17-year-old is Katrina ‘Kat’ Connors, and her mother, Eve, is played by former Bond ‘girl’ Eva Green.   As we see in a series of flash backs, Eve was a wild child in her youth but this vibrant, beautiful woman fell into a deadening routine as a housewife, married to the seemingly dependable, dull and ordinary Brock (Christopher Meloni from TV’s Law and Order, SVU).

Gradually, this imprisonment, and an apparent lack of sexual satisfaction, has unhinged the vibrant Eve to the point where she does not notice that Kat had become chubby and was bullied at school.

Though Eve was prone to mood swings and odd, sometimes cruel and unmotherly behaviour, Kat has now blossomed into a tall, thin, pretty and voluptuous young woman.  She experiments with her sexuality with the handsome, but rather slow boy-next-door, Phil (Shiloh Fernandez) who takes care of his blind, much older mother.

Araki introduces flash backs showing a kind of mother-daughter rivalry as Eve begins to flirt audaciously with Phil, while barging into Kat’s room with abusive and inappropriate remarks.

With the camera low to the ground, Araki shoots the Detective from behind in a close up as the Detective perches his imposing body on the edge of the sofa, as if ready to pounce. From this viewpoint the camera focuses on Kat sitting like prey in the far corner of the large sofa.

But with her luxurious hair, revealing outfit and long, beautiful legs protruding from what can hardly be called a dress, it is difficult to identify the predator.  The dialogue is equally searing as we witness those ‘raging hormones’ in action.

The action continues three years later when Kat returns for a holiday break from her first year at university. Phil now works in a garage and Brock has a lady friend, plain and as seemingly ordinary and dull as himself.  But as Katrina, and the audience, discover, things are not what they seem.

A twist in the film will not seem as out-of-the-blue for those who know Araki’s films (Kaboom, Mysterious Skin), as it might for those who do not. Araki, who has identified himself as ‘a gay Asian American’ does an impressive job evoking a young woman’s recognition of the power of her body, and a thirty-something woman’s perceived loss of hers.

The casting of Eva Green who, at 34, is not quite ten years older than Woodley as mother and daughter is more inspired than odd.  In one of many hair-raising moments in the film, a tipsy, dishevelled Eve tells Kat, ‘you look like I looked when I was you.’

While Green has a splendid time with her over-the-top character, at times her performance turns the film into farce when it would be more of a spine-tingler if Eve’s breakdown had evolved with more subtlety.

If we were watching a gradual degradation of a perfect housewife’s self-esteem we might also begin suspecting the causes and their manifestations, including her efforts to seduce Phil.  Phil himself becomes a kind of human football in the Connor family, and on the evidence of this film, we should be seeing more of Shiloh Fernandez in the future.

Though his consolation prize for missing out to Robert Pattinson in Twilight was a co-starring role in Red Riding Hood opposite Amanda Seyfried, and the remake of The Evil Dead, Fernandez has not yet had the same exposure.

If the interesting supporting cast is impressive, it is teenage poster girl Shailene Woodley who triumphs in her first low profile film since starring in the blockbuster Divergent, and The Fault is in our Stars.

Her performance reveals that the actress has the intelligence and range to capture the nuances of a complex character.  She is now up there with Jennifer Lawrence, Emma Stone, Carey Mulligan, and Scarlett Johansson as the top 20-something actresses who can carry a film.